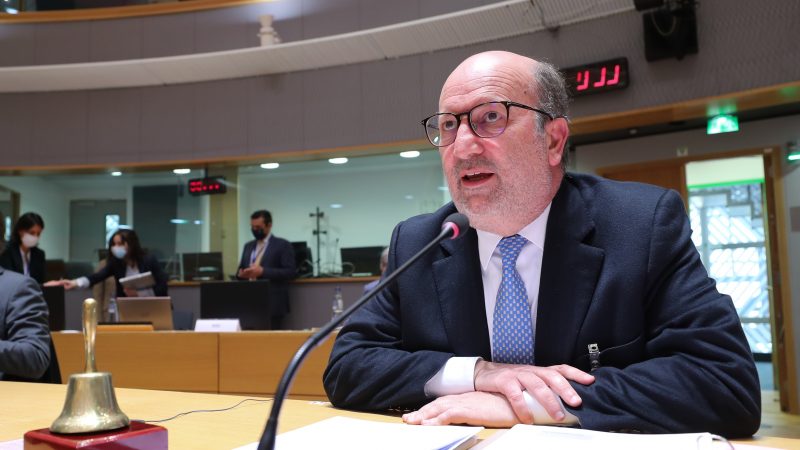 EU member states have adopted a revised mandate for ongoing negotiations with the European Parliament on the EU climate law, including limits on the role of carbon removals in the bloc’s 2030 climate target, according to EU documents seen by EURACTIV.

Lawmakers are now hoping that the next round of negotiations on the climate law next Tuesday (20 April) will be the last, allowing European countries to attend the US climate summit on Thursday with a deal on the EU’s 2030 target.

“The negotiations are ongoing with a full package view of the several main elements in the Climate Law, where nothing is agreed until everything is agreed,” according to an EU source.

“Options are being explored by both parties to bridge the gaps in the remaining issues and the scrutiny of the possible shared compromises will occur in due time,” the source added.

Tabled one year ago by the European Commission, the climate law is the centrepiece of the Green Deal. Its main objective is to enshrine the bloc’s 2050 climate neutrality goal into hard legislation while incorporating the EU’s 2030 climate target, which is still the subject of intense negotiations.

While EU member states painfully agreed on the Commission’s proposal to cut greenhouse gas emissions by at least 55% by 2030, the Parliament has voted a 60% reduction compared to 1990 levels. All three now need to come to an agreement during so-called “trilogue” talks.

Portugal, which currently holds the six-month rotating presidency of the EU Council of Ministers, has been trying to find consensus among the EU’s 27 member states. With a revised mandate, it is now hoping to clinch a deal ahead of the climate summit organised by US President Joe Biden on 22 April. 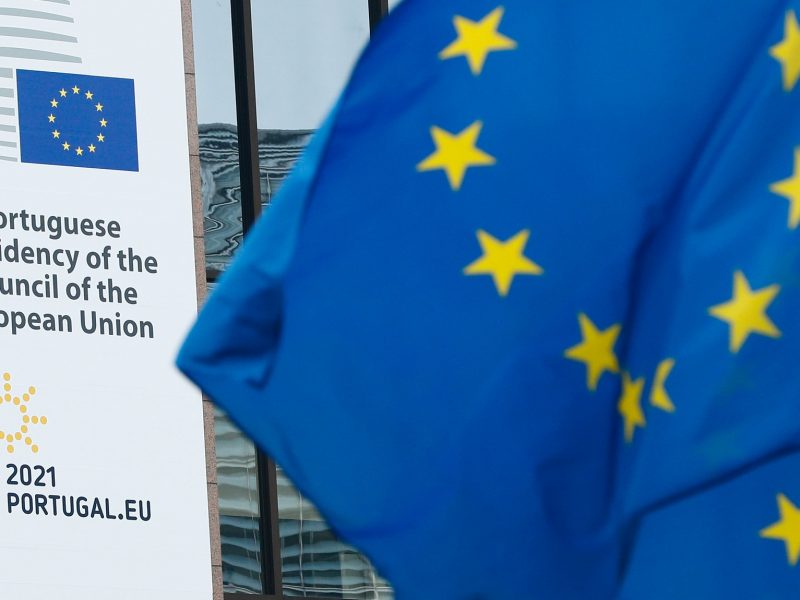 There is still no deal on the 2030 target, but this week saw movement in the position of EU member states when the Portuguese Presidency presented two options for compromise at a meeting of national ambassadors on Wednesday (14 April).

These options kept the existing text, and crucially the “net” target for 2030 which takes into account carbon removals from agriculture and forestry. However, it offered clarification on the inclusion of carbon sinks, a proposal which was contested by Parliament.

LULUCF stands for land use, land use change and forestry, which makes the biggest contribution to carbon removals. According to EU calculations, the current LULUCF sink capacity is 225 million tonnes of CO2. This could either increase or decrease depending on whether policies are put in place to protect Europe’s forests.

The second option was to establish a discount on the contribution of sinks up to 2030: “However, when calculating the contribution of removals for achieving the 2030 climate target, every ton of reported net removals from the EU-wide LULUCF sector, as long as it remains a net sink, shall be discounted by XX%,” the proposal said.

Room documents from the ambassador’s meeting, seen by EURACTIV, suggest that the first option has been selected. This would mean that the EU’s 55% “net” greenhouse gas reduction target for 2030 would be equivalent to a 52.8% gross reduction, without carbon sinks.

“For me, this is much too little,” said Michael Bloss, the Parliament negotiator for the Greens, who points out that carbon sinks can be difficult to calculate.

“There are a lot of big promises like the Green Deal and then basically we settle with real emission reductions of only 52.8%. We can never call ourselves climate champions if we do that,” he told EURACTIV.

Others point out that 52.8% is still much higher than the EU’s current official target of 40%.

“The proposed target of net 55% is very ambitious,” said Peter Liese, a German MEP who is lead negotiator for the centre-right European People’s Party (EPP), the largest political group in Parliament.

“From 1990 until now, we only reduced 25% which means that in 9 years we have to do a bigger step than in the last 30 years. This is necessary and the EPP supports it but it will only be achieved if we use all the necessary tools, including carbon sinks, through sustainable forest management and modern technology,” Liese said.

While the 2050 net-zero emission target has been less controversial, there are still discussions as to whether it should be enforced by each country individually or whether the target applies to the EU as a whole, allowing laggards to surpass it if other meet the objective earlier.

For Richard Brabec, the Czech environment minister, it is clear that the objective should be a collective one. But Leonore Gewessler, the Austrian environment minister, contradicted this, saying, “Austria is in favour of reaching climate neutrality at 2050, at member state level as well. We would welcome it if we could make concessions to the European Parliament.” 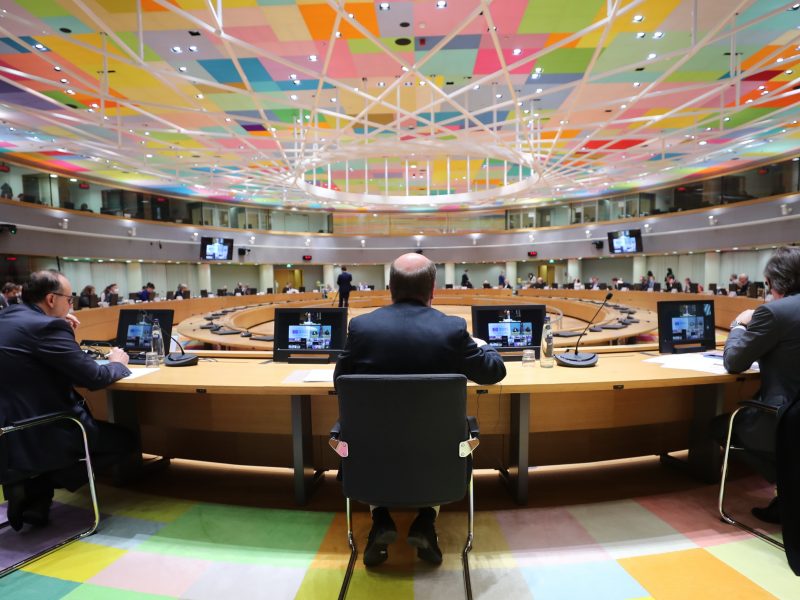 Elsewhere, there is now broad agreement on proposals to establish a new scientific advisory body whose role will be to assess the alignment of EU policies with the bloc’s climate neutrality objective, an idea introduced by Parliament.

However, the exact wording still needs to be fleshed out. The Presidency’s revised proposals include a compromise on this, based on suggestions from Jytte Guteland, the lead rapporteur on the climate law in the European Parliament.

The new compromise, confirmed in the room documents from Wednesday’s ambassador meeting, would see 13-15 members from different EU countries serve for three years on an independent scientific “board”, nominated by the European Environment Agency (EEA).

The Portuguese EU Presidency has worked hard to bring in elements added by Parliament, including on the role of science, and engaging “with determination and the aim of making progress”, according to an EU source.

However, conservation group WWF criticised the compromise proposal for replicating the EEA’s role.

“We mustn’t reinvent the wheel: we already have climate scientists in the form of the IPCC and EEA. What the EU needs is assessment and recommendations by experts from various backgrounds on the consistency of our policies with climate science,” said Romain Laugier, policy officer at the WWF European Policy Office.

A related proposal defended by the Greens is to introduce a greenhouse gas budget defining how much CO2 the EU can produce before 2050 in order to stay within the 1.5°C warming limit of the Paris Agreement.

Originally introduced by Parliament, that proposal eventually won support in the Council of Ministers, notably from France and Nordic countries.

According to the Presidency’s revised proposals, the Presidency would accept part of its proposal for a carbon budget, in exchange for Parliament sacrifices on demands related to access to justice and phase-out of fossil fuel subsidies.

The idea is that the Commission would publish a legislative proposal to set out the 2040 target and a separate, indicative greenhouse gas budget for the EU between 2030 and 2050, six months after the first global stock-take in 2023 to measure progress under the Paris Agreement.

Finally, negotiators are close to an agreement on sectoral decarbonisation roadmaps for sectors like buildings, transport, cement, steel or chemicals, which are considered hard to abate.

While these sectoral roadmaps won’t be mandatory as the Parliament wanted, MEPs obtained commitments that the Commission will regularly monitor developments and facilitate dialogue and sharing of best practices. On climate adaptation, the Commission will also produce guidelines to ensure public works and construction projects follow EU-wide standards related to aspects like flood resilience.

Alongside this, Article 5 of the European Climate Law stipulates that any proposal coming out of the European Commission must be in line with the bloc’s climate neutrality objective. If it chooses to deviate from that goal, the EU executive will need to justify its decision either because the socio-economic costs are too high or because there is no technology available yet to reach the climate neutrality objective in that particular sector of economic activity.

Parliament negotiators from the different political groups will meet on Monday to exchange views on the Council’s revised proposal. The sixth and possibly final trilogue on the European climate law is scheduled for Tuesday afternoon (20 April).

> See below for the compromise proposal from the Portuguese presidency, or download here.