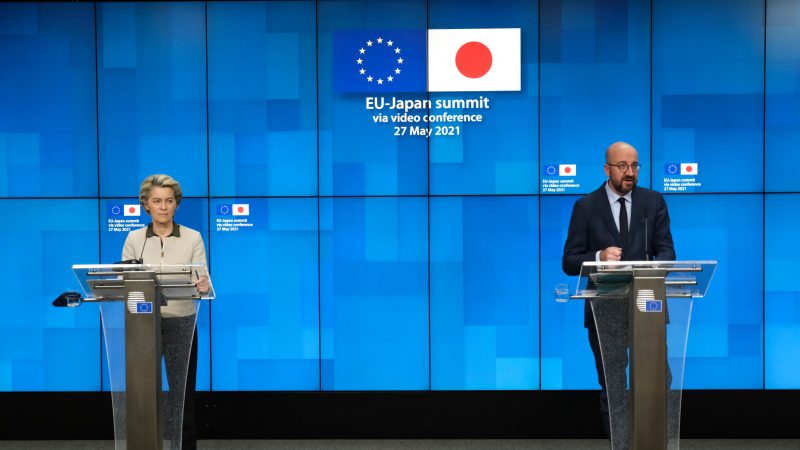 Despite "good progress in the partnership, there is still much to do," said EU Commission President Ursula von der Leyen (L). [Copyright: European Union]

The European Union and Japan have reaffirmed their “shared ambition of reaching net-zero greenhouse gas emissions by 2050” at the conclusion of a bilateral summit which included the signature of an EU-Japan “Green Alliance”.

After meeting by video conference at the 27th EU-Japan Summit on Thursday (27 May), the leaders committed to “join forces to defeat the COVID-19 pandemic and build more resilient, inclusive, green and digital economies”.

Highlighting both sides’ substantial contributions to the COVAX global vaccine initiative, they welcomed the EU’s leading role as a supplier of vaccines around the world, including to Japan.

The leaders also committed to “facilitate trade between the two sides, intensify joint work on connectivity and development cooperation, and increase research, innovation and industrial cooperation”.

The green economy was identified as a major chapter for bilateral relations and trade, with the signature of a nine-page joint communiqué, “Towards a Green Alliance”, adopted at the conclusion of the summit.

“For both sides climate neutrality is their chosen strategy for growth, jobs and competitiveness, as laid down in the European Green Deal and in Japan’s Green Growth Strategy,” says the joint statement.

Both sides said they were committed to promoting innovation in green technologies, including enhanced energy efficiency and large scale deployment of renewable energy, as the focus of their respective strategies for realising the energy transition.

Frans Timmermans, the EU’s climate chief, said Europe and Japan “will work to make our commitment under the Paris Agreement a reality and push to grow global momentum ahead of COP26,” the UN climate summit taking place in November.

“This is the EU’s first Green Alliance. It is a true milestone in our efforts to create a global coalition for net zero by the middle of the century,” Timmermans said in a statement.

The EU and Japan signed a free trade deal in 2018, creating the world’s largest open trade zone, and agreeing to work together to uphold the Paris climate accord.

However, further work lies ahead for the alliance. Speaking after the summit, EU Commission President Ursula von der Leyen pointed out that although “Japan is a like-minded EU partner” and despite “good progress in the partnership, there is still much to do”.

While Japan pledged in October to slash its carbon emissions to net zero by 2050, it still relies on coal for almost a third of its electricity generation, making it the world’s fifth biggest emitter of carbon dioxide. The country’s coal use increased after the Fukushima nuclear disaster, with a total 48 GW of coal power capacity installed.

“The EU is getting close to this pathway, hopefully this initiative can help Japan get there too,” de Pous said on Twitter.

It is unclear though whether the Green Alliance will be sufficient to shield Japanese firms from the EU’s upcoming carbon border adjustment mechanism (CBAM).

The carbon border levy, due to be unveiled in July, aims to put a price on imports from countries where it is cheaper to pollute, as a way of protecting European manufacturers facing higher carbon costs.

In their joint declaration, the EU and Japan said they “envisage discussing carbon pricing as well as WTO compatible carbon border adjustment measures,” without elaborating further.

That prompted sceptical comments from Brussels commentators. “How on earth did Japan pull off the Green Alliance with the EU?” wondered Hosuk Lee-Makiyama, director of the European Centre For International Political Economy (ECIPE), a think tank.

“Does it mean Japan is immune against CBAMs?”

Brussels diplomat chatter: “How on earth did Japan pull off the Green Alliance with the EU?” "Does it mean Japan is immune against CBAMs?"