The bloc’s 27 national leaders will meet in Brussels from 1400 GMT, a day after the bloc’s executive proposed a Green Deal to mobilise €100 billion worth of investment to help the bloc’s economies move away from fossil fuels.

With floods, fires and droughts wrecking millions of lives around the world, the EU’s new executive cast the plan as the bloc’s “man on the moon moment,” kindling hopes among campaigners that other big emitters may follow suit.

But coal-reliant Poland, Hungary and the Czech Republic were not on board, saying a draft decision must spell out in more detail the scale and scope of financing available, and pushing to include nuclear in the EU’s fresh push to cut emissions.

“It’s going to be very difficult,” said a second senior EU diplomat, from a country more reluctant to do more to fight climate change, about chances for agreement at the summit.

To convince them, the Commission plans to establish a €100 billion “just transition mechanism” to help them transition to renewable energy sources.

“The costs of (the switch to) carbon neutrality will be astronomic,” Babiš tweeted. “We want the EU to take this into account in the next budgeting period,” he said, urging Brussels to accept nuclear energy as an emission-free source.

While western EU members expect to cut carbon emissions to zero by 2050, Czechs aim to reach 80% of the goal by then.

But however ambitious the Commission’s environmental plan is, it will be very dependent on the money EU members are willing to spend on it.

No agreement is expected on that after a proposal by the bloc’s current president Finland to cap joint spending at €1.087 trillion for 2021-27 was rejected by both the frugal camp and those seeking heavier outlay. The leaders might agree, however, to hold a summit next February to seal a deal.

“We’re getting near the time when we have to sit in the sauna and sweat it out,” said another senior EU diplomat.

Still, the European Commission’s “Green Deal” gives hope that an agreement can be reached.

Earlier, she had compared the ambition of the plan to the 1960s US mission to the moon, but Green groups were quick to warn it does not go far enough.

The key element of the plan will be a law committing member states to build a carbon neutral economy by 2050 – but first it will need the go-ahead from parliament and EU leaders.

“We do not have all the answers yet. Today is the start of a journey. But this is Europe’s man on the moon moment,” von der Leyen said, promising a “new growth strategy” that “gives back more than it takes away”.

“We have to make sure no one is left behind,” she told reporters. “This transition will either be working for all and be just, or it will not work at all.”

‘The cost of non-action’

In parliament, she said: “Some say the cost of this transition is too high, let us never forget what the cost of non-action would be. It is rising by the year.”

The document is the first major political challenge for the former German defence minister since she took charge of the European Commission this month.

And it comes as a UN global climate summit is under way in Madrid – focusing attention on the crisis – and on the eve of von der Leyen’s first EU summit.

The French government said the Green strategy displayed “a strong ambition on climate and environmental protection”.

Various leaked versions of the plan have been flying around Brussels for weeks, and lobby groups from all sides of the debate have been piling on pressure.

The European Parliament was the first to officially receive the plan.

“At this point, we can’t yet say if it’s a Green Deal or green washing,” said French Green MEP Karima Delli as associations feared the proposals did not go far enough.

The leaders of EU member states will hear it on Thursday at their Brussels summit and von der Leyen’s deputy Frans Timmermans will take it to this week’s COP25 forum in Madrid.

“It’s important that, in parallel to the announcement, there’s a signal” of support from European leaders, European Council President Charles Michel said.

The key goals are to use a combination of cleaner tech and carbon capture methods to make Europe the first “carbon neutral” economy by 2050. 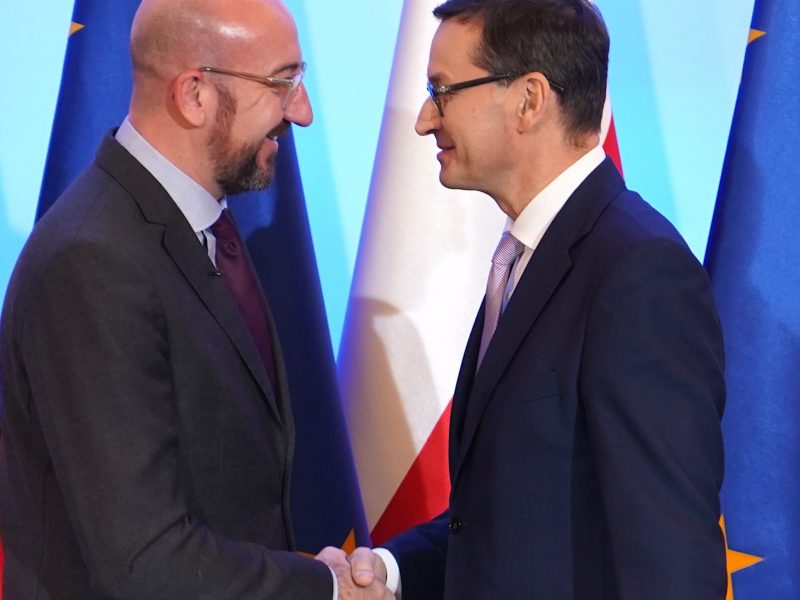 European leaders gathering today for an EU summit in Brussels will try to persuade Poland, Czechia and Hungary to rally the bloc’s proposed carbon neutrality goal for 2050. Brook Riley explains why this is both a moment of drama and anticlimax.