Guteland's proposals include a climate target of 65% and the establishment of a European climate council similar to the UN's IPCC, which is to develop proposals for a target path until 2050. [Foto: European Parliament]

The European Parliament’s environment committee discussed for the first time on Thursday (28 May) a proposal by Swedish MEP Jytte Guteland to set an EU-wide CO2 reduction target of 65% by 2030. EURACTIV Germany reports.

Speaking by video conference, the Swedish MEP presented her report on the EU’s updated climate change target for 2030.

“We need to start now and move faster than the Commission’s proposal” which aims for a 50-55% reduction in greenhouse gas emissions by 2030, Guteland told her colleagues.

The Swedish MEP referred to the UN’s emissions gap report for 2019 published in November, which highlighted the need to cut global emissions by 7.6% annually in order to meet the 1.5-degree target of the Paris Agreement. 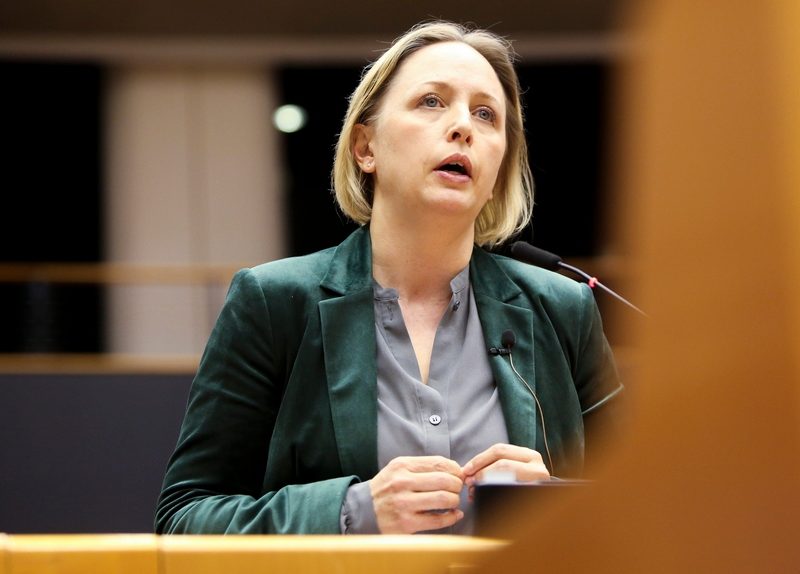 The European Parliament is gearing up for tough talks on the EU’s climate target for 2030, with a 65% emissions cut now firmly on the table.

Although Guteland is from the Socialists and Democrats (S&D) group, EU Parliament sources told EURACTIV that her proposal had not been discussed previously within her own group and even came as a surprise.

The Swedish MEP nevertheless received broad support from her own ranks and from the left.

“If we want to comply with the Paris Agreement as we signed it, we have to aim higher in our objectives,” said Sylvia Modig, a Finnish MEP from the leftist GUE/NGL group who backed Guteland on all points. Her political group would “not be prepared to compromise on the Paris climate targets,” she told MEPs.

Right-wing and conservatives lawmakers struck a wholly different tone, however.

Sylvia Limmer, a German MEP from the far-right Alternative for Germany party (AfD), highlighted the economic costs of hiking the EU’s climate ambitions. According to the European Commission, achieving the current 40% target would require annual investments of €260 billion, a figure that reaches €620 billion with a 55% goal, she pointed out.

The promise that the Green Deal would create prosperity for all is “nonsense”, Limmer said. “You have to be able to afford environmental protection,” she insisted.

The centrist Renew Europe group was positive yet reserved towards Guteland’s proposal.

Last year, political parties in the European Parliament backed a 55% target for 2030, reminded  German centrist MEP Andreas Glück, from the Free Democratic Party (FDP). “We risk being considered unreliable vis-à-vis the EU Council and the Commission if we now raise this target again,” he warned.

The largest group in Parliament, the centre-right European People’s Party (EPP), however, drew a clear line at 50%.

The proposal of 65% is “beyond good and evil”, German MEP Peter Liese recently told EURACTIV. Anything more than 55% would never find the approval of the EU Council anyway, he said, calling on his colleagues to be realistic.

“Let’s concentrate on the Commission’s proposal and not overdo it,” Liese told fellow MEPs.

In previous statements, the EPP said it was ready to back a 50% target for 2030 but would not go further without a thorough cost-benefit analysis and comparable commitments from other big polluters such as the US and China.

The EU Parliament traditionally advocates higher environmental and social standards than the Council and the Commission. But it is unlikely to go above 55%, said Pascal Canfin, a French centrist MEP who chairs the Parliament’s environment committee.

“There is no majority in favour of a lower target, as it would not be science-based. But there is also no majority for more than 55% because it would be too fast and too drastic for the industry concerned,” Canfin told EURACTIV in a recent interview.

In December, the EU’s 27 leaders agreed to aim for climate neutrality by 2050, despite reservations from Poland, which asked for more time to sign off on the EU-wide objective.

In March, the European Commission presented a landmark EU climate law which aims at enshrining the bloc’s climate neutrality goal into hard legislation. The 50-55% emission target for 2030 will be inserted into the law once the text is adopted, the Commission said.

A formal legislative proposal on the EU’s 2030 goal will be tabled in September, after the Commission completes a thorough cost-benefit analysis, said Frans Timmermans, the European Commission’s vice-president.

The impact assessment will look into issues such as competitiveness, cost efficiency and social justice, as well as technical and scientific knowledge. A public consultation on the subject is ongoing and will run until 23 June.

But the economic recession caused by the COVID-19 pandemic is making the Commission’s cost-benefit analysis more complicated.

In view of the COVID-19 pandemic, the new target for 2030 must be “ambitious, but above all realistic,” the Czech Republic said in a recent paper.

The Parliament’s environment committee will vote on the EU Commission’s proposal for a new 2030 target on 10 September. Parliament will then debate it during the first October session.