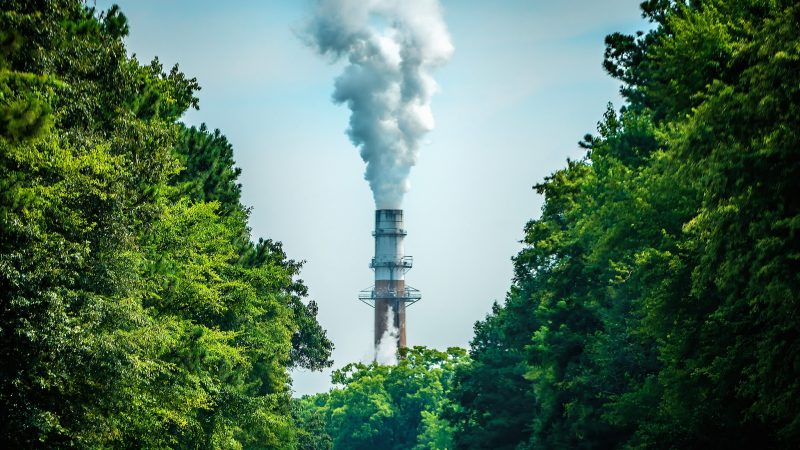 Is this green? The European Commission has tentatively defined “transition” economic activities as those which are not green as such but still emit significantly less than the industry’s average. [Bill Dickinson / Flickr]

It’s one of those technical debates that have become the trademark of EU policymaking in Brussels.

Faced with growing controversy over a draft sustainable finance taxonomy, which aims at channelling billions of euros worth of private investments into the green economy, the European Commission has floated a compromise proposal.

Or rather, it submitted a “non-paper” to the member states and the European Parliament summarising the approach taken by its Technical Expert Group of advisers on the matter.

According to the expert group, “green” economic activities can be subdivided in three broad categories:

Of the three, “low-carbon activities” are probably the easiest to define. According to the group of advisers, those include, for example, the “production of electricity from wind power,” as well as activities such as forest restoration and rehabilitation, which contribute to carbon sequestration.

Other examples include “zero-emission transport” such as “electric cars or trains” as well as “near to zero-carbon electricity production” like solar power.

Enabling activities are also relatively simple to identify, or at least their definition is politically uncontroversial. According to the expert group, those include the “manufacturing of wind turbines” because it “enables substantial GHG emissions reductions” in power production even though the manufacturing process itself does emit some carbon dioxide.

The “installation of highly efficient boilers in buildings” also falls in that category because it “enables GHG emissions reductions” in the housing sector, the experts argue. 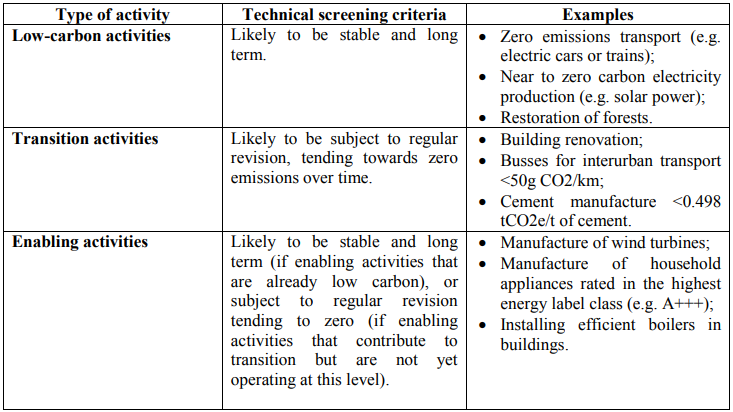 More complex – and more contentious – is how the taxonomy could reward “transition” activities: those that are not green as such but which “can make a substantial contribution” to climate action because they emit significantly less than the industry’s average.

Building renovation is listed there, as well as buses for interurban transport, if they do not emit more than 50g of CO2 per kilometre. Advanced cement manufacturing is also cited as an example, as long as emissions “are less than 0.498 tCO2e per tonne of cement”.

But according to EU experts, gas-fired power plants would not qualify as a transition activity, because they emit more than 100g CO2 per kWh of electricity produced – the threshold defined by the expert group to qualify as “making a substantial contribution to climate change mitigation”.

Energy utilities such as France’s ENGIE have argued in favour of recognising natural gas as a “transition” fuel under the taxonomy. Even though it emits global warming gases when burned in power plants, fossil gas also helps lower emissions when it displaces coal in electricity generation, they argue.

However, energy companies could still use the 100g carbon threshold to claim they are achieving “significant progress” under the climate objective of the taxonomy, the expert group said.

“For example, a utility company could claim that by switching, for part of its activities, from coal to gas in its electricity production, it is reducing its GHG emissions from 900g CO2/kWh to 400g CO2/kWh, and therefore reducing harm to the objective of climate change mitigation,” the group said.

In other words, even though coal-to-gas switching would not be recognised as “green” per se, providing the information would still be useful to help investors understand the efforts made by those companies in reducing their emissions.

Sébastien Godinot, a climate and energy campaigner at the WWF, said the Commission memo has one big merit: “It clarifies an essential point – that the transition category does not apply to sectors where low carbon technologies are commercially available, such as wind power”.

EU countries are currently locked in a dispute over which energies should qualify as “green” under the draft taxonomy, with Germany, Luxembourg and Austria – supported by the European Parliament – opposing French attempts to win recognition for nuclear energy as a “low-carbon” activity.

Negotiations on the draft taxonomy have dragged on because of disagreements over nuclear and “transition” activities. A final deal between the European Parliament and the member states, initially expected in December, has been delayed into 2020.