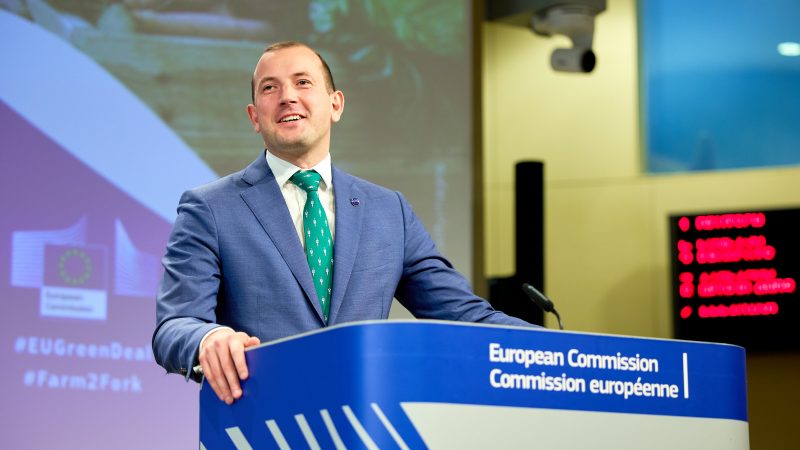 “When you prevent soil erosion, you're acting on food security, not only in the long term but also in the short term. When you restore wetlands, you're avoiding floods in the cities downstream,” said Virginijus Sinkevičius, the EU's environment commissioner. [European Union, 2022]

The aim of the proposed regulation is to restore natural degraded ecosystems, in particular those with the most potential to remove and store carbon, and to reduce the impact of natural disasters linked to global warming.

The Commission proposal came as Europe is hit by extreme weather, with Italy affected by severe droughts and water shortages already before the beginning of summer, and intense rain storms leading to severe flooding in Spain.

“Some see the war as a perfect excuse to pull the brakes” on biodiversity and green farming practices, said European Commission Vice President Frans Timmermans, who presented the new law to the press on Wednesday (22 June).

“Using the war in Ukraine to water down proposals and scare Europeans into believing sustainability means less food is frankly quite irresponsible because the climate and biodiversity crises are staring us in the face. And every European citizen is seeing this on a daily basis now, wherever you live,” he added.

Today, 81% of EU protected habitats are in poor condition, according to the European Environment Agency (EEA). At national level, assessments indicate a low number of habitats with good conservation status, with intensive agriculture, urban sprawl and pollution putting pressure on land and habitats.

To reverse this, the proposed EU Nature Restoration Law sets an overarching target of restoring 20% of the EU’s land and sea area by 2030 and all ecosystems in need of restoration by 2050.

The proposed targets – seven in total – seek to address the issue from several fronts, such as reversing the decline of pollinator populations by 2030, stopping net loss of green urban spaces by 2030, with a subsequent increase of 5% by 2050, and removing river barriers so that at least 25,000 km of rivers are turned into free-flowing rivers by 2030.

In agricultural ecosystems, the aim is to achieve an overall increase in biodiversity, and to achieve a positive trend for grassland butterflies and farmland birds. Additionally, the targets include restoring and rewetting drained peatlands. Forest ecosystems and marine areas are also included among the spheres of intervention.

“What we are presenting today isn’t just about nature or nature’s beauty, even though it’s, of course, extremely important. It’s much more than that,” said Virginijus Sinkevičius, the EU’s Environment Commissioner.

“When you prevent soil erosion, you’re acting on food security, not only in the long term but also in the short term. When you restore wetlands, you’re avoiding floods in the cities downstream,” he added.

“We have a lot of knowledge now about the climate benefits of nature-based solutions. And with this new law, we can start putting all this into practice”.

The new law will benefit from substantial EU funding: around €100 billion will be available for biodiversity spending, including nature restoration.

But this investment will largely repay for itself, the EU executive said. According to the Commission, every €1 spent into nature restoration adds between €8 and €38 in economic value, thanks to the ecosystem services they support.

Under the proposal, EU member states will have two years after the adoption of the legislation to prepare their national restoration plans.

Brussels will evaluate those plans, propose improvements or point out to existing issues, but it will not formally approve them, and there will be no obligation for EU governments to change them.

The goal is to give member states room for manoeuvre to decide the best national measures to comply with the targets since each geographical area presents very different characteristics.

However, legally binding targets are set for 2030, 2040 and 2050. This means that governments will be held accountable for the progress they make, and there will be checkpoints to make sure that they comply with the obligations.

“The ecosystems in the EU and in the member states of the EU is so different that it is not possible from Brussels to define what are the restoration measures that work in Italy and in Finland and in Malta and in Greece,” a senior Commission official explained.

The proposal was welcomed by environmental groups as a game-changer in the fight against climate change and the loss of biodiversity.

“Today’s Nature Restoration Law has set the scene for the EU to be a leader in the global biodiversity framework negotiations under the Convention on Biological Diversity,” said Alberto Arroyo Schnell, from the Europe chapter of the International Union for Conservation of Nature (IUCN).

However, they worry that giving too much freedom to member states will result in delays and a lack of effective action at national level.

“Setting concrete targets and securing strong national implementation tools can turn the tide in the fight against these twin crises, but only if they are enforced,” said Ioannis Agapakis, Wildlife and Habitats lawyer at ClientEarth.

“For this law to have teeth, we need to see planning and monitoring, rules for the measures adopted, and consistency with other EU legislation – otherwise the law’s targets will remain just numbers on a page,” he added.

The proposed targets include: