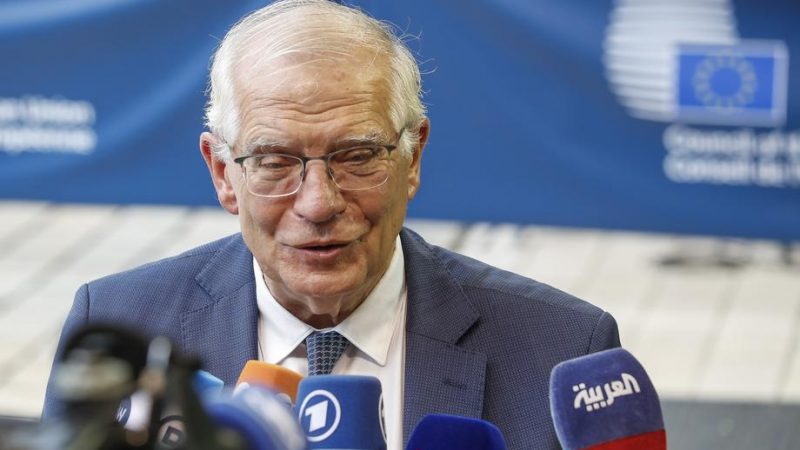 Borrell also reacted, saying it is an ‘important step forward in the EU facilitated dialogue and will deliver concrete results for all citizens.” [EPA-EFE/JULIEN WARNAND]

An agreement signed between Kosovo and Serbia that will see Serbs in the north of Kosovo pay for electricity for the first time in 23 years has been welcomed by the EU’s chief diplomat Josep Borrell and the Commission.

Serbs living in four northern municipalities have not paid for electricity since the end of the Kosovo-Serbia war, which led to Kosovo’s independence, but the new agreement will see energy supplied to the area, implementing an earlier deal reached in 2015 as part of the EU-facilitated dialogue.

EU envoy for the dialogue Miroslav Lajcak made the announcement on Twitter.

“Very pleased to announce that Kosovo and Serbia just adopted the Energy Agreements’ Implementation Roadmap in the framework of the EU-facilitated dialogue. This is a major step forward,” the EU envoy for dialogue Miroslav Lajcak announced on Twitter.

Borrell also reacted, saying it is an ‘important step forward in the EU facilitated dialogue and will deliver concrete results for all citizens.”

The agreement was reached in Brussels between the Belgrade and Pristina chief negotiators, Petar Petković and Besnik Bislimi.

In November 2021, Kosovo’s energy network operator KOSSTT announced it would stop supplying Serb-majority municipalities with free electricity. The decision came after an €11 million agreement to subsidise power in these regions expired last year.

Serbia and Kosovo had reached an initial deal in 2015 within the framework of the EU-facilitated dialogue Kosovo-Serbia. According to that deal, a Belgrade-backed company would be in charge of supplying energy to the four municipalities in the north.

The EU has requested that the Energy Community Secretariat monitor the technical implementation of the commercial arrangement between Elektrosever and the Kosovo Energy Distribution Company (KEDS).

Political analyst Dusan Janjić said the Agreement on the Roadmap for implementation of Energy Agreements envisages that the Serbs in Kosovo’s north will have to pay electricity bills in the future, while Serbia-owned company Elektrosever (Electronorth) will get a licence for operating in Kosovo.

Janjić has told BETA that, according to the Roadmap, Elektrosever will be integrated into the Kosovo energy system by the end of the year, and will receive from Pristina a licence to distribute and collect payments for consumed electricity in Kosovo’s north. He added that Elektrosever would also receive authorisation from a Turkish company responsible for electricity distribution in the whole of Kosovo.

According to him, “the drama” with the agreement would be unveiled once Elektrosever submits figures about unpaid electricity bills. “Five years ago, the outstanding debt for consumed electricity in Kosovo’s north since 2008 was EUR115 million. Electricity bills have not been paid in Kosovo’s north for decades and they will have to be paid now, which will most probably trigger protests of the local population,” Janjić stressed.

The Serb List party from northern Kosovo has hailed an agreement between Belgrade and Pristina, saying that the agreement will prevent Serbian energy systems from being seized and paves the way to talks on a Association of Serb Municipalities in Kosovo.

The agreement “prevents our energy systems from being seized and the supplying of our citizens from being threatened,” the Serb List said, adding that Serbs in Kosovo had not been running from their obligations, but that they had asked that this be done as part of an agreement and that payments be made to Elektrosever, a sister company of Serbian power company EPS.

However, Kosovo has remained adamant that they will never allow an Association of Serb Municipalities, calling it unconstitutional and saying it would result in a situation like Bosnia and Herzegovina, which is a failure.

Dialogue between the two countries has stalled since July 2021. While head negotiators have met on several occasions, but have yet to settle on agenda matters for a formal meeting between Kosovo’s and Serbia’s leaders.

In May, Prime Minister Albin Kurti and Serbian President Aleksandar Vucic had dinner with Lajcak in Berlin, after each party met separately with German Chancellor Olaf Scholz. The informal dinner was an attempt to revive the dialogue, which has remained frozen since July 2021.

So far, the most crucial matter of Serbia recognising Kosovo’s independence has not been on the table. Furthermore, only a handful of the agreements made have actually been implemented.