“Net-zero emissions by 2050 should be achievable at a net-zero cost without compromising overall economic growth or prosperity,” says the study by the global consulting firm, published on Thursday (3 December).

Although reaching climate neutrality will destroy six million jobs across Europe by 2050, it will also create an additional 11 million jobs in new sectors, the report says.

“The cost increase and the cost savings almost perfectly balance out,” said Hauke Engel, partner at McKinsey. “The cost of living will not increase. In fact, it will slightly decrease for lower-income households,” Engel told a EURACTIV event on Thursday (3 December).

And those estimates are deliberately conservative, Engel added, because they don’t take into account avoided costs of climate change, such as health impacts and physical risks to property.

The European Union agreed one year ago to aim for climate neutrality by 2050, a target which is now being put down into hard legislation in order to make it a legally binding commitment on the EU and its 27 member states.

To put the EU on track for climate neutrality, the European Commission proposed tougher climate goals for 2030 and set off an extensive review of all EU policies ranging from energy to transport and agriculture – an ambitious agenda known as the European Green Deal.

But the magnitude of change required to reach the 2050 goal is causing apprehension in eastern EU countries like Poland and Romania, whose industries are heavily dependent on fossil fuels.

“It’s a green transformation for our economy and for our societies, and it requires the involvement of everyone,” said Victor Negrescu, a Romanian lawmaker who sits on the European Parliament’s budget committee. “We have to evaluate the side-effects of the transition and make sure we do not leave anyone behind,” he told participants at the event.

The European Commission is acutely aware of this. Calls for “a just transition” have become one of the favourite refrains of Commission vice-president Frans Timmermans, who is in charge of overseeing the European Green Deal. “This transition will be just or there will be just no transition,” he often says.

To prevent deepening inequalities, the EU executive has put forward a just transition fund in order to support training and reskilling of workers in industries like coal mining. EU leaders have endorsed the fund, agreeing to bump it up from €7 to €17.5 billion as part of a broader budget deal worth €1.8 trillion over the next seven years.

This money will be sorely needed, and probably insufficient by some accounts. According to McKinsey, up to 18 million workers in the European Union will need reskilling of one form or another because of the energy transition.

The challenge, according to Negrescu, is not only related to finance, it’s also about lack of expertise. “This is one of the weaknesses in Eastern Europe: We don’t have the expertise, the capacity to adapt as fast as we should. Therefore, more involvement from the EU is necessary, also in terms of investment,” he said.

Engel acknowledged that Poland and other Eastern EU countries face a bigger challenge than other EU member states in the transition to a low-carbon economy.

But even for Poland, he says, the overall gains from the transition will be positive. “We actually looked at Poland in a stand-alone report this year. And what we found there is that also in Poland, from a purely industrial and technology perspective, net-zero is absolutely achievable,” Engel said. 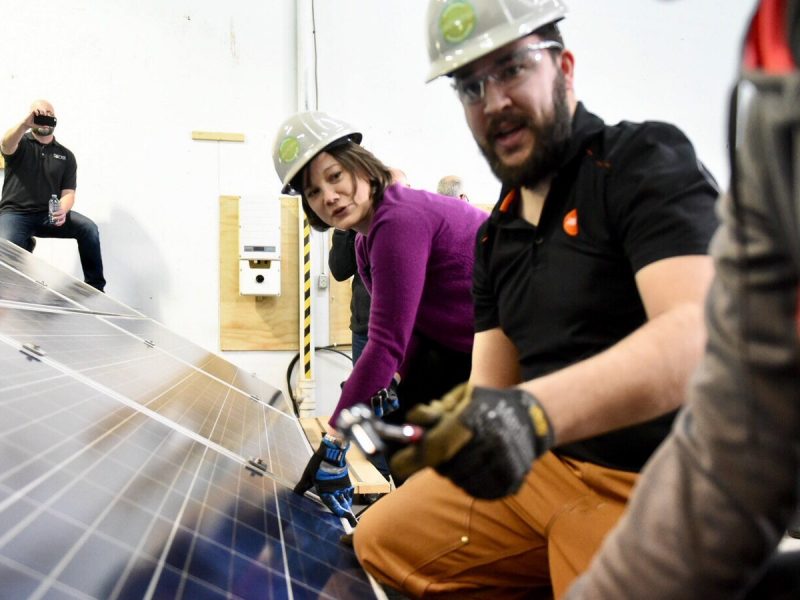 Still, Warsaw has so far rejected the EU’s proposed 2030 climate goal and, together with Hungary, has held up an agreement on the EU’s €1.8 trillion seven-year budget and coronavirus recovery fund.

Poland’s main worry is related to the economic cost of the transition. According to McKinsey, the level of investments in clean technologies that are needed to reach the net-zero goal is truly colossal, estimated at €28 trillion over the next 30 years.

However, most of those—about €23 trillion or €800 billion a year—could come from redirecting investments that would otherwise fund carbon-intensive technologies, the report says. The difference—€5.4 trillion, or €180 billion a year—would need to come from other public or private sources of funding.

Marcel Beukeboom, a climate envoy of the Netherlands, acknowledged that Poland faces a bigger challenge than other EU countries. But he says the EU’s track record since the 1990s shows that decoupling economic growth from carbon emissions is possible.

“Focusing on the short term cost might distract our attention from the bigger picture. The initial cost might be higher in some areas and some sectors, but ultimately the benefits are clear,” he said.

Technologies: More than halfway there

The good news is that more than half of the technologies required for the transformation are already available today.

According to the McKinsey report, the power sector would be first to reach net-zero emissions, in the mid-2040s, because most of the necessary technology is available now. Transport would approach its target in 2045, followed by buildings in the late 2040s, industry in 2050, and then agriculture.

But beyond 2030, “accelerated innovation will be critical to get further emissions reductions,” the report continues, with 64% of EU cuts expected to come from large-scale electrification and energy efficiency (47% and 17%, respectively). Demand-side measures and circularity would reduce emissions an additional 15% while hydrogen would contribute another 13%.

The rest would come from ramping up the use of biomass, land-use changes, and other innovations such as inert anodes in aluminium production.

“The greatest cost uncertainty is whether it will be cheaper to reduce emissions by using biomass, hydrogen, or CCS in some instances,” the report says. “More specifically, it’s unclear yet whether it will be cheaper to replace gas heating with biomethane or hydrogen, using other heat sources such as waste heat, or implementing CCS for industrial heat.”

The ultimate cost, it says, will vary by country, depending on local biomass prices and availability, the cost of hydrogen, and the proximity of low-cost storage for carbon capture.

One response to “Europe can hit climate neutrality goal at net-zero cost: report”