"We can't tolerate any excuses for not moving towards carbon neutrality. We are all in the same canoe, but it is starting to be submerged by water in some places," said Fiji's Prime Minister Frank Bainimarama.

The announcement of the EU’s Green Deal brought a breath of fresh air to the UN climate summit in Madrid, two days before the scheduled end of the COP25.

“This objective is concrete. It gives a clear framework to companies. It is essential,” he said. 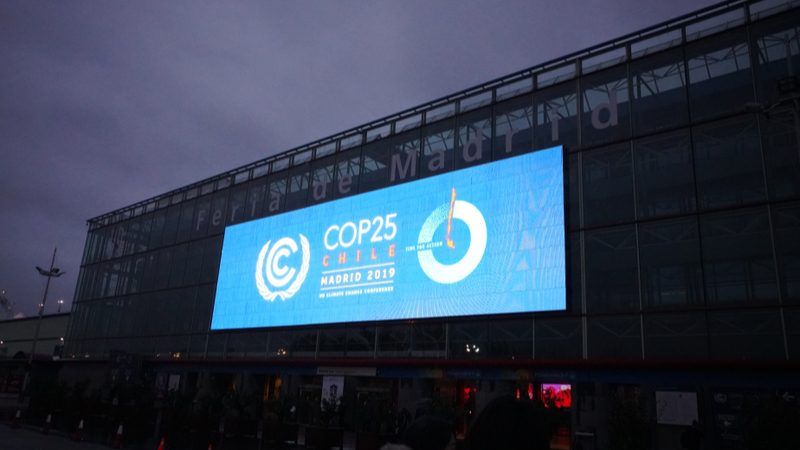 The UN climate summit in Madrid has gathered hundreds of companies committed to the net-zero carbon goal. Nations, for their part, are gathered under the Net Zero Coalition, which currently brings together 75 countries, including Fiji.

“We can’t tolerate any excuses for not moving towards carbon neutrality. We are all in the same canoe, but it is starting to be submerged by water in some places,” said Fiji’s Prime Minister Frank Bainimarama.

This sentiment was shared by Portugal’s Environment Minister, João Pedro Matos Fernandes, who welcomed the presentation of the Green Deal. “Now, we have the reasons and opportunities for investing. There are no excuses for not moving towards net-zero emissions,” he said.

The EU: top of the class

At the Benelux stand, the Netherlands organised a debate on the Green Deal, where politicians and MEPs were invited to react.

“There is always a first in the class, and on climate, it must be Europe, which has governments that are sufficiently constructive to do so,” said Eric Wiebes, the Dutch Economy and Climate Minister.

The minister proposed extending the EU carbon market, and suggested making greater use of industry, by harnessing carbon capture and storage.

But not everyone was enthusiastic. Swedish MP Marlene Burwick called for more ambition, with at least a 55% reduction in emissions by 2030.

“But more money is needed! One hundred billion over seven years, with leverage, is not serious. Because the leverage effect is not of 15 when it comes to energy efficiency or public transport,” he said.

“We have declared an environmental emergency, but now we must accelerate things, even if this means holding extraordinary European Councils and announcing an ambitious plan by June. We cannot settle on a policy of small steps,” Larrouturou said.

Youth organisations, which were very active on the side of Greta Thunberg at COP25, heckled the EU delegation (photo), to denounce what they called a lack of ambition from the European Green Deal.

Thirteen organisations, including CliMate, are calling for a very rapid decision to raise European ambition. They are calling on Europeans to reduce carbon emissions by 65% by 2030, in an effort to reach carbon neutrality by 2040.

Such an objective is unlikely to be taken on board at this stage however, even if the mobilisation of young people over the past year has had an undeniable impact on the EU’s climate ambition.