A glance at the EU Commission's database reveals that 1,559 active proceedings are currently underway against the 27 member states and Germany is involved in 76 of these cases.

Last week, the European Commission initiated three new infringement proceedings against Germany for failing to implement EU law, bringing the total to 76. But even though this may seem like a lot, Berlin is by far not the EU’s worst offender. EURACTIV Germany reports.

The proceedings heaped pressure on Germany’s environment and agriculture ministries to fall into line with EU law, underling the country’s struggle to comply with the bloc’s strict environmental rules.

Last week brought further bad news, with the Commission initiating three new stages of proceedings against Germany. Two of those are in the first stage, during which Berlin has to answer a formal letter of notice from the Commission within two months.

The first case relates to delays in setting up the necessary technical infrastructure regarding the electronic transmission of information on the movement of goods, which is affecting the “anti-fraud capabilities of other member states”, according to the letter from the EU Commission.

In the second case, the Commission is calling on Germany to improve its regulations for the protection of surface waters, which is similar to the case regarding excess levels of nitrate in groundwater.

The proceedings regarding the German nature conservation areas went into the next stage on Wednesday (12 February). The EU Commission considers it a “general and persistent practice” in all German states not to specify clear conservation goals in the so-called Natura 2000 areas.

The EU executive has now sent Berlin a so-called “reasoned opinion”, giving Berlin two months to answer before it considers bringing the matter to the European Court of Justice (ECJ).

“It is well known that Germany has been sloppy with Natura 2000 for years. The government and the federal states are trying to sit this topic out because they want to avoid trouble with farmers and forest owners,” said Green MEP Martin Häusling in a press release.

He also wrote that the German government does not understand why Natura 2000 exists and that in the probable event of a conviction by the court, it will “be taught a better lesson”.

Will Germany have to pay up even more fines? Not necessarily, because infringement proceedings against EU member states are actually quite the norm and usually settled before they reach the final stage.

Every month, the Commission checks whether member states are implementing EU directives correctly and warns all those who, in its view, aren’t doing so. Each member state thus has a number of ongoing proceedings, most of which are closed before sanctions are imposed.

However, recent claims made by some media outlets that Germany is the country with the most proceedings against it are factually incorrect. The actual number of ongoing proceedings in all EU countries are reflected in the table below: 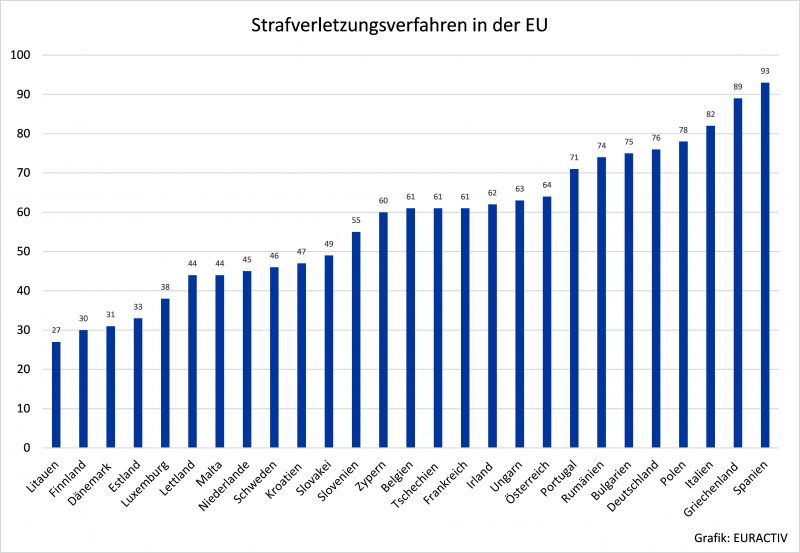 A glance at the EU Commission’s database reveals that 1,559 active proceedings are currently underway against the 27 member states and Germany is involved in 76 of these cases.

Most of them relate to taxation and customs, followed by environmental proceedings and breaches of EU rules related to the internal market and industry.

But the number of ongoing cases says little about the seriousness of the violations. Because if Germany does not comply with regards to water protection and Natura 2000 regulations, it could soon have to face the European Court in Luxembourg. 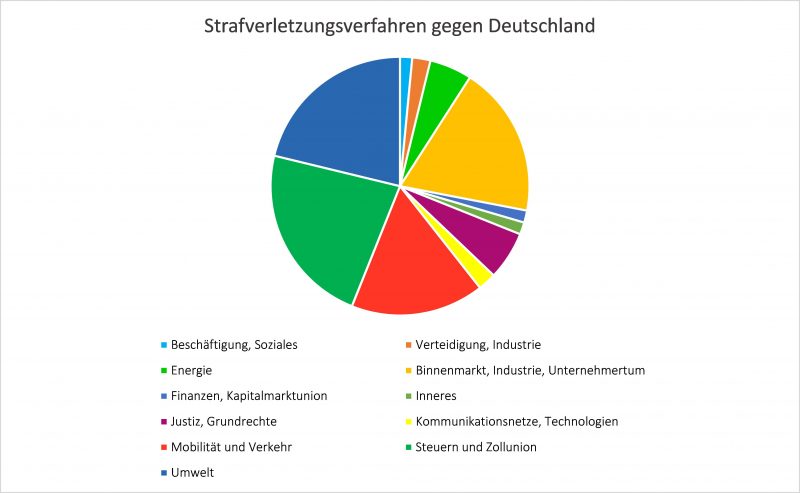