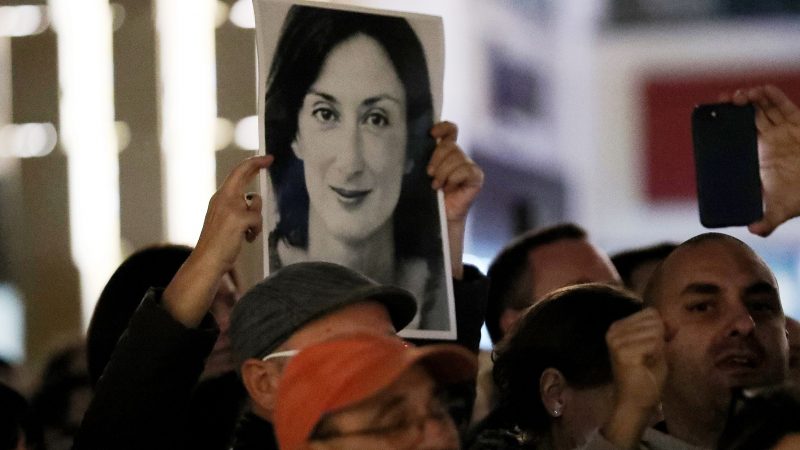 The family of murdered Maltese journalist Daphne Caruana Galiza, and several EU lawmakers, have called on the EU not to fund a gas pipeline project between Malta and Sicily that will link to a power station part-owned by the man on trial for her killing.

Caruana Galizia was investigating the Delimiara power station in Malta and the Electrogas deal involving Yorgen Fenech, who has been charged with conspiracy in her murder with a car bomb in October 2017. This is the same power station that the EU could be set to part-fund. Fenech, who is currently on trial, denies any part in the assassination.

“This is is for me, for first and foremost a question of moral credibility of the European Union,” Claudia Gamon, an EU lawmaker for the centrist Renew group, told a press conference in Brussels on Wednesday (8 December).

“It wouldn’t make any difference if they were building a wind power plant. It shouldn’t be funded with EU money if it is directly related to a corruption scandal and the murder of Daphne Caruana Galizia.”

While EU officials and MEPs are due to start deciding on rules to phase out EU subsidies for fossil fuel projects, Malta and Cyprus have secured exemptions for pipelines that link them to European networks.

The ‘Melita’ pipeline project, which will funnel gas between Sicily and Malta, has now been included on an EU list of Projects of Common Interest (PCI), which could see it receive EU funds towards its €400 million price tag.

Negotiations on the revision of the TEN-E regulation will end on 14 December, and their outcome will impact the possibility of EU funds being used for the project. EU lawmakers will then vote on the fifth PCI list, including the Melita project, in early 2022.

The move has been criticised by environmental campaigners and civil society.

Fenech was previously the director of ElectroGas, the company the runs the power station. He, along with family members, still own key stakes in the company.

Maltese police say Caruana Galizia’s murder was motivated by her investigation of the power station and the related Electrogas deal.

Months after Malta’s Labour party came to power in 2013, a major public contract was awarded to a consortium of companies, including Fenech’s and Azerbaijani State energy company SOCAR.

At the time, the Auditor General raised concerns that “the selection committee had been inconsistent in assessing bids” and that “changes to parameters were made during the selection process.” It was also noted that there were “concerns over the project’s design overall.”

Maltese investigative journalists then discovered that the Maltese state energy company, Enemalta, would end up paying twice the market rate for natural gas through the deal, giving SOCAR at least $40 million in profit.

Further revelations showed that through a company called 17 Black, Fenech was set to make payments of €150,000 a month to Panama companies owned by Mizzi and Schembri.

Omtzigt’s 2019 report stated that the “facts have given rise to widespread suspicions of corruption and money laundering”.

No one has been arrested or convicted for corruption in the Electrogas deal, and those involved maintain their innocence.

A Commission source told EURACTIV that Malta needs to end its energy isolation through integration into the trans-European gas network, so it was decided to include the Malta-Italy gas pipeline in the fifth PCI list.

In terms of EU funding, the source said that “it is important to highlight that while the inclusion on the PCI list makes the project eligible for CEF financing, the access to CEF financing is subject to a separate application process involving an independent evaluation process”.

The source added that the Commission has been in contact with the Maltese authorities and representatives from the project promoter, Melita TransGas co, renamed Interconnect Malta Ltd.

“We would point out that the Commission has not had any contact with Electrogas and that they are not the project promoter,” the source concluded.

EURACTIV has contacted the Maltese government with regards to the progress of ongoing corruption investigations into the deal, but no response was received by the time of publication.

At Wednesday’s press conference, MEP Marie Toussaint said: “We are really living in a moment of truth for THE EU, for the European Commission and for the European Council, and we will do everything that we can to oppose this project from receiving this public money and in support.”