Indicative schematic of maritime boundaries and exploration blocks in the East Mediterranean, as at end 2012. [Oxford Institute for Energy Studies]

Relations have been strained in recent months following Turkish exploration and drilling operations in waters claimed by both Cyprus and Greece.

Here is the latest on these so-called “blue gold” reserves.

Cyprus, which has aspirations of becoming a major energy player in the region, has a key exclusive economic zone (EEZ), divided into 12 blocks and potentially rich in gas.

The deals, which last 25 years, allow operations at the Aphrodite gas field, discovered in block 12 south of the island in 2011.

In return, Nicosia is expected to earn revenues estimated at $9.3 billion over 18 years, according to calculations by its energy ministry.

Italian firm ENI and France’s Total are also mounting exploration activities further west, particularly in block 6 at a site called Calypso, which could contain between 170 and 225 billion m3 of gas.

Meanwhile further south in block 10, US giant ExxonMobil and Qatar Petroleum announced the discovery in 2019 of the Glaucus-1 field, which could house 130 billion m3 of gas.

The East Mediterranean has been “an explorer’s paradise in the past decade with giant low-cost gas discoveries”, explained Aditya Saraswat and Pranav Joshi, analysts at Rystad Energy.

Discovered a decade earlier, it is thought to contain 539 billion m3 of natural gas.

The Tamar deposit – closer, at just 50 miles from Haifa – has been in operation since 2013 and its reserves are estimated at 238 billion m3.

In addition, Israel has fields of smaller sizes, including Tanin and Karish.

Neighbouring Egypt also has a gigantic offshore field, Zohr, discovered in August 2015 by ENI, which could house 850 billion m3. 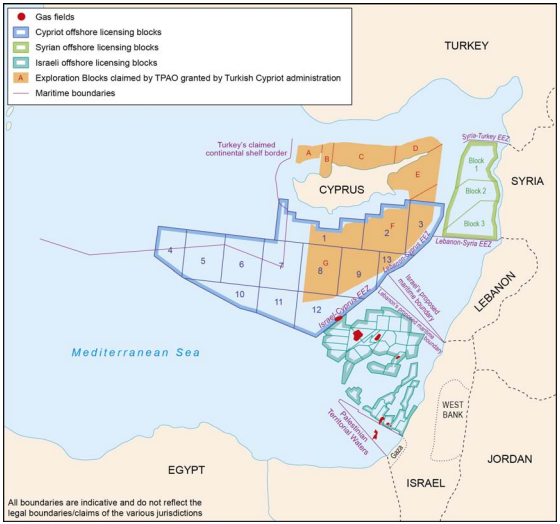 Indicative schematic of maritime boundaries and exploration blocks in the East Mediterranean, as at end-2012. [Oxford Institute for Energy Studies]

To transport this abundance of gas to the rest of Europe, and help meet its aim of reducing energy dependence on Russia, Cyprus, Greece and Israel struck an agreement in December 2018 to build a gas pipeline, called East Med.

This 1367-mile pipeline is set to pass 106 miles south of Cyprus and end in Otranto, in southern Italy after crossing the Greek island of Crete and mainland Greece.

The cost of its construction is estimated at $7 billion and it should be able to transport 20 billion m3 of natural gas annually.

However, building the pipeline is still several years away and it would not be operational until 2025 at the earliest.

In the meantime regional tensions abound, with Greece accusing Turkey of violating international maritime law by prospecting in its waters.

Ankara maintains that it has the right to conduct energy research, arguing small Greek islands near its coast do not preclude it from exploring the vast waters of the eastern Med.

It dispatched a gas exploration vessel there in August, but after provoking a storm of regional controversy withdrew it shortly before a European summit in early October.

Turkey also maintains a fraught relationship with its Cypriot neighbour, decades after its 1994 invasion of the northern part of the island in response to a coup by Greek Cypriots wishing to unify with Greece.

Formal discussions on reunification have stalled since 2017.

Israel’s turbulent relations with its neighbours add to regional tensions, including an ongoing dispute with Lebanon over an offshore zone.

While the Jewish state has been exporting natural gas from the Leviathan and Tamar fields to Egypt since January, Jordan has passed a motion to ban Israeli gas imports, undermining a 2016 agreement allowing them.