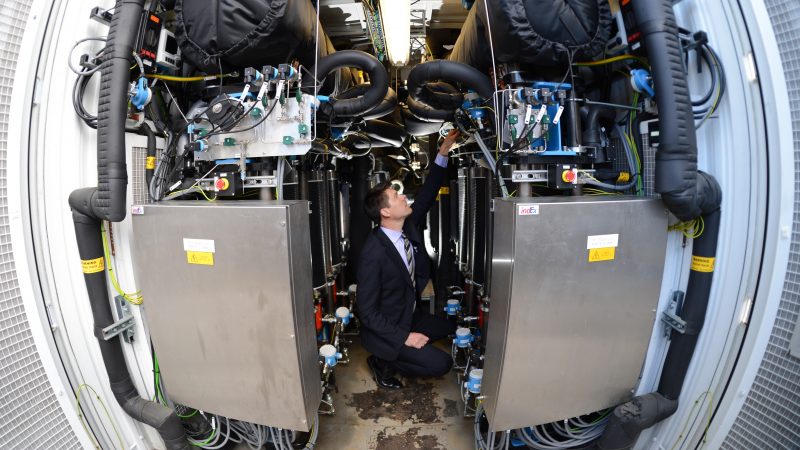 Simon Bourne, chief engineer of the British company ITM Power, based in Sheffield, northern England, checks a proton exchange membrane electrolyser, which is the center piece of a power to gas demonstration plant, in Frankfurt Main, Germany, 07 May 2014. [EPA/ARNE DEDERT]

Up to 34% of global greenhouse gas emissions from fossil fuels and industry could be cut “at manageable cost” thanks to clean hydrogen produced from renewable electricity, says the study, published on Monday (30 March).

“The falling cost of making hydrogen from wind and solar power offers a promising route to cutting emissions” in hard-to-abate sectors such as steelmaking, transport and chemicals, according to BNEF’s ‘Hydrogen Economy Outlook’.

“However, this will only be possible if policies are put in place to help scale up technology and drive down costs,” the report adds.

Renewable hydrogen could be produced for $0.8 to $1.6/kg in most parts of the world before 2050, the report said, adding this would make the clean fuel competitive with current natural gas prices in countries like Brazil, China, India, Germany and Scandinavia.

When including the cost of storage and pipeline infrastructure, the delivered cost of renewable hydrogen in China, India and Western Europe could fall to around $2/kg in 2030 and $1/kg  in 2050, the report said.

Crucially, this would make clean hydrogen production from renewable electricity cheaper than producing it from natural gas, which is currently the main process of generating the fuel.

Around 70 million tonnes of hydrogen are currently being used globally, mostly for oil refining and chemical production, according to the International Energy Agency (IEA).

But getting clean hydrogen produced in sufficient quantities and at reasonable costs to decarbonise the economy will require a determined push by policymakers, according to the outlook by BloombergNEF.

“The clean hydrogen industry is currently tiny and costs are high. There is big potential for costs to fall, but the use of hydrogen needs to be scaled up and a network of supply infrastructure created,” said Kobad Bhavnagri, head of industrial decarbonisation for BNEF and lead author of the report.

“This needs policy coordination across government, frameworks for private investment, and the roll-out of around $150 billion of subsidies over the next decade,” he added.

According to policy analysts, mobilising such a huge amount of subsidies will require an EU-wide framework, or even a global coalition for scaling up green hydrogen in order to avoid the risk of free-riding.

“If every country waits for green hydrogen to become cheaper someday, this will considerably delay decarbonisation specifically in hard-to-abate sectors like industry and aviation,” said Matthias Deutsch, a senior associate at German think tank Agora Energiewende.

Indeed, some countries might find it attractive to avoid shouldering the innovation costs associated with early hydrogen deployment by simply waiting for other countries to pay the higher bill, he wrote in a recent opinion piece for EURACTIV.

What he recommended is to mandate a quota for green hydrogen in gas production at EU level, and gradually raise the target it in order to scale up production.

“Economic recovery efforts in the context of the European Green Deal provide a unique opportunity to make a coordinated down-payment on the clean hydrogen economy, with all of the ensuing benefits for European job creation, economic growth and industrial competitiveness,” Deutsch said.

Europe is currently at the forefront of a global push to deliver hydrogen at scale, with most projects currently happening on the old continent, according to the IEA.

At EU level, the European Commission is planning to launch an EU-wide “clean hydrogen alliance” in the summer, bringing together EU member states and companies involved in the hydrogen value chain.

The initiative will be modelled on the European Battery Alliance, which brought together more than 200 companies, national governments and research organisations around battery manufacturing.

However, producing hydrogen at scale will be a huge challenge, BNEF warned.

Meeting 24% of energy demand with hydrogen – and keeping with the 1.5C warming scenario of the Paris Agreement – “will require massive amounts of additional renewable electricity generation,” the report said.

“In this scenario, around 31,320 TWh of electricity would be needed to power electrolysers – more than is currently produced worldwide from all sources,” the report said.

Add to that the additional renewables that are required to decarbonise the power sector, and the figures become dizzying.

“Total renewable generation excluding hydro would need to top 60,000 TWh, compared to under 3,000 TWh today,” the report points out.

This also means many countries would have to import hydrogen from abroad in order to cover their needs.

“China, much of Europe, Japan, Korea and South East Asia may not have enough suitable land to generate the renewable power required,” the report points out, echoing similar findings by BDI, the German industry association.

In Germany, one of the scenarios BDI identified for 2050 points to “an import demand of 340 terawatt hours (TW/h)” of hydrogen, said  Carsten Rolle, executive director at the World Energy Council Germany, and head of energy and climate policy at BDI, the German industry association.

This, he told EURACTIV last year, “is broadly speaking equivalent to the capacity of the complete German power plant fleet in order to produce hydrogen or others efuels abroad for Germany”.

Scalability and land availability issues could be partly addressed by producing hydrogen from other sources than renewables, such as natural gas.

Although more expensive, hydrogen produced from fossil fuels with carbon capture and storage (CCS) “may still need to play a significant role, particularly in countries like China and Germany that could be short on land for renewables but are well-endowed with gas and coal,” the report said.

Oil and gas producers agree. “What we know for sure is that we can’t afford to be picky: all clean hydrogen sources are needed to get to the scale we need,” said François-Régis Mouton, Europe director the International Association of Oil and Gas Producers (IOGP).

“We can already start by gradually expanding and decarbonising today’s hydrogen production – 2/3rds of which comes from gas – by combining it with CCS,” Mouton said.