“At the heart” of von der Leyen’s new Commission “is our commitment to becoming the world’s first climate-neutral continent,” the incoming Commission chief said on Tuesday (10 September) as she presented her team and their respective portfolios.

The appointment of Frans Timmermans as Executive Vice-President for the European Green Deal – as well as Climate Action Commissioner – was von der Leyen’s opening revelation as she unveiled her new team.

Climate neutrality “is a long-term economic imperative,” she stressed, saying “those who act first and fastest will be the ones who grasp the opportunities from the ecological transition.”

Timmermans, who is currently serving as first deputy to outgoing Commission President Jean-Claude Juncker, will also be the Commission’s head of climate action, taking over duties from Spain’s Miguel Arias Cañete.

In a break with Juncker’s structure, the top officials will now have access to the services of the executive’s directorates-general. In Timmermans’ case, that is DG Clima.

“We need an ambitious Green New Deal for Europe, which shapes the future for our children and ensures their health, prosperity and security on a green and thriving planet,” the Dutchman tweeted, adding that he is “excited to work on this for the next five years”.

Von der Leyen has already made specific asks of Timmermans, outlining in her mission letter that she is entrusting him to fulfil a number of pledges she made during her campaign to secure the European Parliament’s blessing for her presidency.

That includes boosting the EU’s 2030 emissions target from a 40% reduction “to at least 50%,” von der Leyen says in her mission letter to Frans Timmermans. And “by 2021…you should put forward a comprehensive plan to increase the EU’s target for 2030 towards 55%,” she added.

Timmermans will also have to propose “the first European Climate Law” within the new Commission’s first 100 days of office. That legislation will have to include the bloc’s commitment to go carbon-neutral by 2050.

This means the Dutchman will have to rely on member states unanimously backing the mid-century target, a goal that has so far proved elusive given the objections of the Czech Republic, Estonia, Hungary and Poland.

EU diplomats have told EURACTIV that a final deal on the 2050 climate neutrality objective is not expected until the 12 December EU summit at the earliest, after Poland’s national elections are done and dusted.

Von der Leyen’s first 100 days elapse in early February, while the first summit of 2020 will be in early March. EU member states have committed to brokering a deal by year’s end but the four hold-outs are yet to buy the financial argument of the energy transition.

To win Poland’s backing, von der Leyen pointed to the Just Transition Fund, a financial tool linked to the EU’s carbon market, which is aimed at countries like Hungary and Poland. Timmermans has been tasked with coordinating its implementation.

Monies under the just transition fund will be allocated to coal dependent regions, among others, von der Leyen explained, while the fund itself will be managed by regional policy Commissionner Elisa Ferreira.

Timmermans is expected to put his full weight behind the “just transition” agenda, saying  on Twitter he wants to “build a clean and sustainable European economy that leaves nobody behind.”

Timmermans will not be alone in fighting the green fight. As part of his executive-president duties he will coordinate the work of Commissioners in charge of energy, transport, agriculture and even trade.

Kadri Simson, Estonia’s pick for the Commission, will handle energy policy, which has been split from the climate action brief. The former economy minister is no stranger to the sector, having overseen inter-institutional talks on the reform of Europe’s electricity markets during Estonia’s tenure of the rotating EU presidency.

In her letter to Simson, von der Leyen tasks her with ensuring “Europe follows the energy-efficiency-first principle across the board” and boosting the uptake of renewable energy deployment.

“Given the increased ambition of the European Green Deal, you should assess the need to review legislation,” the new Commission chief said in her letter to Simson.

Von der Leyen asks the new Commissioner-Designate for energy to assess the need to reopen EU renewable energy and energy efficiency legislation, "given the increased ambition of the European Green Deal"https://t.co/0dPEY3y0dR pic.twitter.com/DhMj62oQhh

Carbon border tax on the agenda

The new energy chief will also have to scale up investments, and look into how to switch payments from dollars to euros.

But the potentially most explosive initiative will be the upcoming proposal on a carbon border tax, which von der Leyen attributed to the Economy Commissioner, Paolo Gentiloni.

“You should lead on the proposal of a Carbon Border Tax, working closely with the Executive Vice-President for the European Green Deal,” von der Leyen wrote in her mission letter to Gentiloni, saying the tax “is a key tool to avoid carbon leakage and ensure that EU companies can compete on a level playing field.”

“The Carbon Border Tax should be fully compliant with WTO rules,” she added.

During her press conference, von der Leyen refused to go in further detail about the tax, only offering up clues to what the Green Deal could look like.

“I’m convinced that sooner or later every region on this globe will have to join in the global [race] to have a climate-friendly behaviour, a climate-friendly economy, climate-friendly production lines,” the president-elect said. “We will certainly have periods that will be more difficult. But the direction is absolutely the right one,” she said.

Once considered a non-starter in Germany because of the trade disputes it could trigger, the carbon border tax is now gaining supporters in Berlin and European business circles.

Earlier this year, Europe’s biggest business lobby group said it was discussing the idea, in order to restore a level playing field with countries like China or the US, which do not impose a pollution constraint on their industries.

“We try to show other big players in the world that we are not only committed to reaching our [climate] targets but also to enforce it,” said Markus J. Beyrer, an Austrian who is director general of trade association BusinessEurope.

Now that briefs are allocated and names finalised from the Commission’s side, the action moves on to the European Parliament, where MEPs will have their say over von der Leyen’s picks.

Environment committee chairman Pascal Canfin (Renew Europe) said he “welcomes the new organisation of the European Commission… the ecological transition is dealt with as a priority… under the responsibility of the 1st Vice-President”.

Timmermans for his part, said he was “looking forward” to his Parliament hearing. During his campaign to win the Commission presidency he pledged to “be personally responsible for climate change”. That appears to have become a self-fulfilling prophecy. 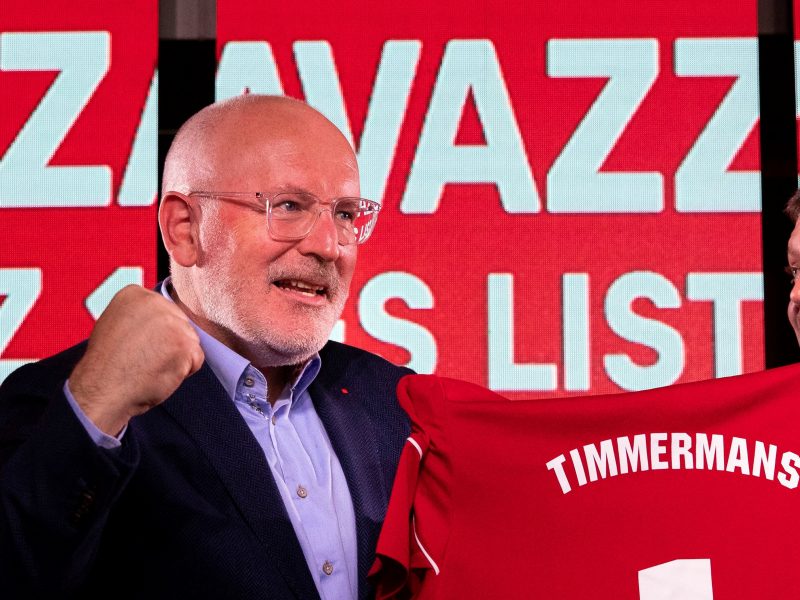