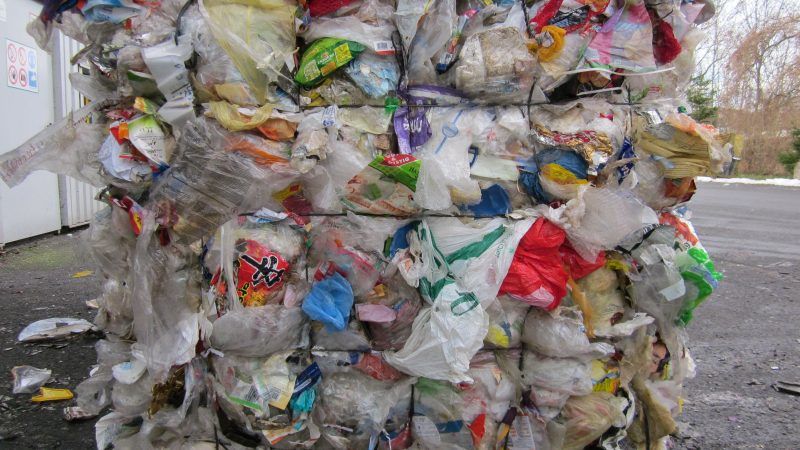 One of the many bales of household waste that can be fed into the recycling machines. [CeDo]

At a recycling facility in the town of Geleen, north of Liège and Maastricht, sorting machines, washers and industrial melters run around the clock every day of the year to convert problematic plastic waste into something useful.

Other recycling centres have carved out their own niches, buying up polyethylene terephthalate (PET) bottles or other readily available waste materials to convert into products like carpet, clothing or even back into bottles.

But the CeDo plant in Geleen, the first in Europe to start dealing in PET back in 1985, got out of the bottle game in 2012 when its management realised it could not compete due to low interest in the finished product.

Now CeDo pursues a new type of business model, where the recycling arm of the operation is directly linked to the manufacturing end. Essentially, the company has created a closed loop of sorts, where recycled material is guaranteed to be used within its own value chain.

“We needed someone to use our recyclates,” explained managing director Ton Emans, who described to EURACTIV the virtues of abandoning the idea of independent recycling.

That is why the Geleen plant, the largest of its type in Europe, only recycles polyethylene film (PE), a material that lines the aisles of our supermarkets as many producers use it as food packaging.

As of 2018, half the material processed by the plant comes from household waste, out of a total 80,000 tonnes recycled every year. That waste would otherwise likely have been landfilled or incinerated.

Once processed into plastic pellets, the recycled PE is shipped to CeDo’s manufacturing plants, which then use the pellets to make garbage and recycling bags. Retailers are keen to offer consumers a ‘made from recycled waste’ option and CeDo fills that market gap.

Some recyclers won’t touch PE film though, because they do not have an outlet for it once it’s been processed, leading many in the trade to label the idea of dealing in it as “impossible”. Recycling it is simple enough but making it profitable is the real challenge.

But Emans explained that his setup is part of an existing trend of producers taking over the recycling part of the chain: “They have to do it because recyclers are making plastic cheaper and damaging their account books”.

Indeed, there are expectations that the plastic industry, whose output is expected to expand to 80 million tonnes a year in Europe, will not invest in new virgin plastic capacity, due to high start-up and maintenance costs.

Not impossible but imperfect

But Ton Emans has a problem and it’s located right at the beginning of the recycling line: the sorting stage.

When plastic arrives at the Geleen plant in bales, collected from Austria, Belgium, Denmark, France, the Netherlands and the UK, it is only sorted to some extent.

In the bales, one can expect to find only 75% usable PE, 10% polypropylene (PP) and 15% unrecyclable multi-layered plastics, like crisp packets and chocolate bars.

PP is a recyclable material but not the target plastic, so it does not fit in with Emans’ “focus on one stream and you can be king” business motto.

So before anything can be washed and melted down and eventually turned into garbage bags, the PE has to be sifted out by complex sorting machines that use infra-red scanners to collect what can actually be used. [For a more in-depth description of the recycling process, see Background] 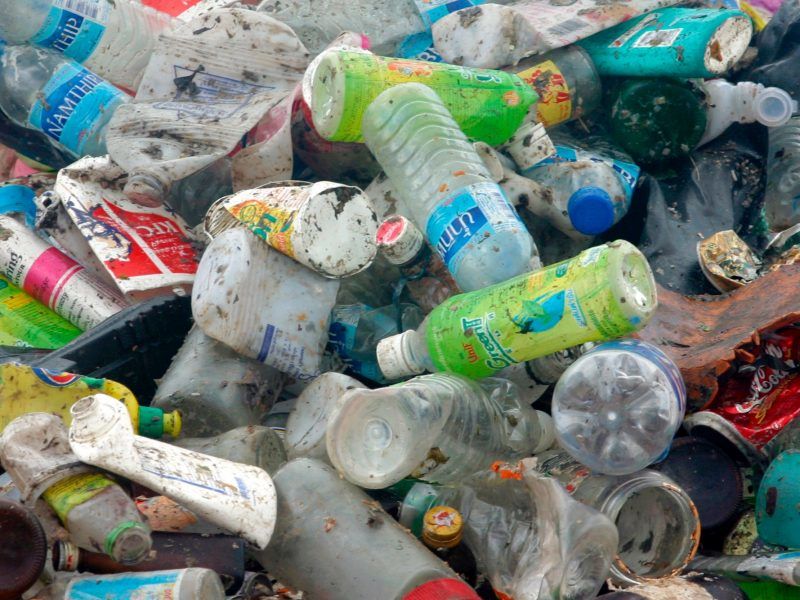 “For higher quality recycling, we want pure streams. That 75% PE mix should be over 90%. If it is over 90%, then I can run my machines beyond the current four tonnes limit to eight tonnes,” Emans said, adding that large-scale collection and sorting centres have a lot to gain from cleaning up streams.

Most bankruptcies in the sector are based on uncontrolled streams, where recyclers are unable to guarantee a quality end-product, which pushes down their prices.

According to Emans, more recyclers would take the leap and open up shop if that guarantee was in place, meaning more material would be bought and processed.

“If shit goes in, then shit comes out,” the Dutchman quipped, adding “that’s no good if we’re going to compete with virgin plastic”.

Europe’s new focus on recycling and setting up a true and profitable internal market for waste was really kicked off by China’s recent decision to ban the import of waste, and Emans calls that move “a blessing in disguise”.

“It was totally wrong the way the rest of the world, Europe included, used it as a dumping ground for waste and unrecyclable material,” he said, urging the European Commission to follow through on its work on EU waste rules through monitoring and ensuring that member states implement the law.

Reiterating what EU leaders have said recently about plastic waste and January’s Plastic Strategy, Emans warned that “plastic is not bad, plastic waste is the problem”.

The Geleen plant runs 24 hours a day, 365 days a year and is crewed by a multi-cultural team that are kitted out to work the machines during every public holiday. If Europe’s internal market for recycling kicks into overdrive, expect more operations like CeDo to spring up.

“I encourage you, or anyone else to copy this business model. I relish the competition,” Emans shouted during a tour of the noisy shop floor in Geleen.

“And let me share my dream with you: toilet roll bags. People will always need them, rolls will always have to be packed in plastic like this, we just need the outlet,” the Dutchman concluded with a wink and a smile.

How PE recycling works in Geleen

Bales of collected waste are dropped off at the Geleen plant, after processing at a large-scale collection and sorting centre. One of the largest in the Benelux area is located in Rotterdam.

Those bales are then fed into large sorting machines, which filter out everything that is not polyethylene film, using infra-red scanners to monitor which materials are rigid. High-power fans blow the material onto separate conveyor belts.

Anything that is not PE but which is still recyclable is bundled up and sent on to plants that actually process the material.

Next, the mostly PE stream is shredded into tiny pieces or flakes. Another stage of sorting takes place here, as heavier and lighter flakes are separated.

The flakes are then washed with environmentally friendly detergent in order to remove contamination and pollutants, like sand and dirt. In fact, the Geleen plant removes so much sand from the waste that it is able to supplement its revenue by selling it on to construction companies.

Once dried, the flakes can then be melted down and made into the pellets that are needed for the manufacturing process. During this process, one of the few unusable by-products is created: ink. Mostly toxic, the ink used in wrappers and labels is removed and disposed of accordingly.

Finally, the pellets or ‘nurdles’ are made by compressing the melted plastic pieces. They are then bagged up, given a final quality check and then transported to the manufacturing plant that needs them.

What it's all about: the final product, plastic pellets, ready for use in manufacturing processes. [CeDo]