The leaders of France and Ireland have threatened to vote against a trade deal between the EU and South American trade bloc Mercosur unless Brazil, where wildfires continue to devastate the Amazon rainforest, takes its environmental obligations more seriously.

Earlier this year, negotiators reached a political agreement on a commercial tie-up between the two trading blocs, after 20 years of talks finally yielded a result.

Finer details are still under consideration but alarm bells began to ring after Irish leader  Leo Varadkar suggested he would try to vote down the agreement. French President Emmanuel Macron followed suit on Friday (23 August) with a blistering attack.

Responding to concerns over vast wildfires raging in the Amazon rainforest, Varadkar said in a statement that “there is no way that Ireland will vote for the EU-Mercosur free trade agreement if Brazil does not honour its environmental commitments”.

In a statement ahead of the G7 summit in Biarritz, a spokesperson for Macron said that “the president can only conclude President Bolsonaro lied to him at the Osaka summit”, referring to assurances he gave on climate at the last G20 meeting.

“In these conditions, France will oppose the Mercosur deal as it is,” the spokesperson added.

Jair Bolsonaro, Brazil’s far-right president, has been accused of encouraging loggers to start fires and of not directing enough resources to fight the blazes. He has claimed that environmental groups have turned to arson to discredit the country.

Areas of rainforest are routinely set alight in order to clear the area for pastoral farming, particularly by cattle farmers. Under Mercosur, beef exporters are set to benefit from a 99,000-tonne annual quota, which will only be subject to a 7.5% tariff. 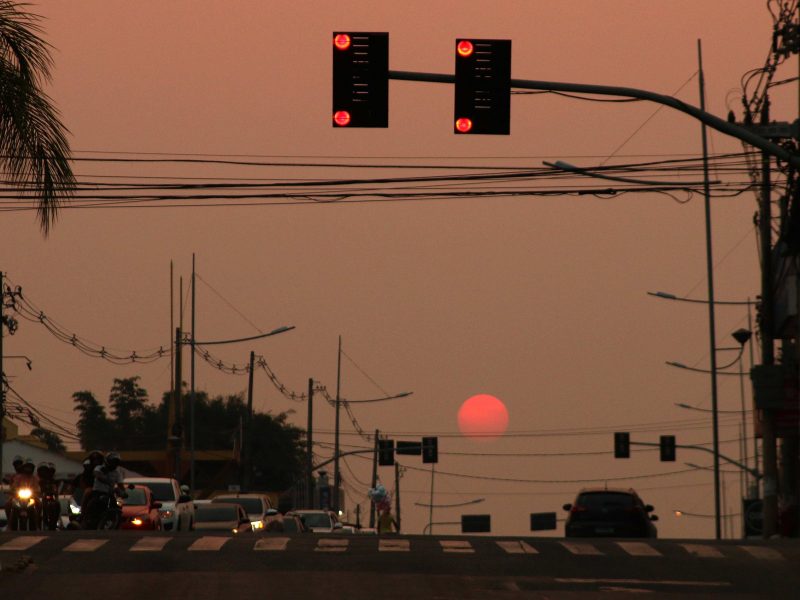 As Amazon burns, Brazil's Bolsonaro tells rest of world not to interfere

“Bolsonaro’s efforts to blame the fires on environmental NGOs is Orwellian,” Varadkar said.

Macron suggested in 2018 that he would block Mercosur if Bolosonaro pulled Brazil out of the Paris climate deal. But the Brazilian leader changed his tune and said he would not mirror Donald Trump’s decision to nix American involvement in the climate pact “for now”.

Ahead of the G7 meeting this weekend, Macron had said earlier that “our house is on fire. Literally. The Amazon, the lung of our planet which produces 20 percent of our oxygen is burning.”

However, Green MEP Molly Scott-Cato said that “Macron himself gave the green light to Amazon destruction when he signed off the Mercosur trade deal without insisting on rainforest protection”.

The European Environmental Bureau’s Anton Lazarus told EURACTIV that “the brakes need to be slammed on the proposed Mercosur trade deal and current and future agreements should be revisited to put people, nature and climate first.”

He added that “where environmental protections have been included in trade deals, they have clearly been insufficient”.

Responding to the unfolding crisis, Finnish Finance Minister Mika Lintila suggested that the EU should look into banning beef imports from Brazil to dissuade farmers from setting fires deliberately. Finland is the current holder of the rotating EU presidency of the Council.

France and Ireland, whose farmers have complained about the agricultural elements of Mercosur, would not be able to strike down the deal alone though and would have to build a blocking minority to stop it in its tracks.

The European Parliament, as well as national parliaments across the EU, will also have to approve the deal. The Economist‘s Intelligence Unit concluded that “the ratification process will be politically complicated”.

Under the current timetable, a European Council vote on the pact would take place in about two years, after further fine-tuning and translation into all official EU languages.

“During the course of these two years, we will monitor closely Brazil’s environmental actions,” Varadkar warned.

The prime minister’s statement also concluded that it would be difficult to tell European farmers to use less fertiliser and fewer pesticides if trade deals do not reflect those asks.

All new trade deals brokered by the EU now include a sustainability chapter, which ties the signatories to upholding the principles of the Paris Agreement; however, the so-called ‘Paris clause’ has been criticised for lacking real bite.

The EU’s recently finalised Japan deal, the largest commercial pact ever struck, has a sustainability chapter and an EU court ruled in 2017 that Brussels would be entitled to cancel parts of the agreement if its criteria are not followed.

But critics have warned that the economic considerations in play make that scenario unlikely and that the vague language of the chapter provides signatories a lot of room to manoeuvre.

A report by Greenpeace this month revealed that Japan is actually in the process of building coal power plants overseas – in Bangladesh, India, Indonesia and Vietnam – that would not be permitted under its own environmental standards.