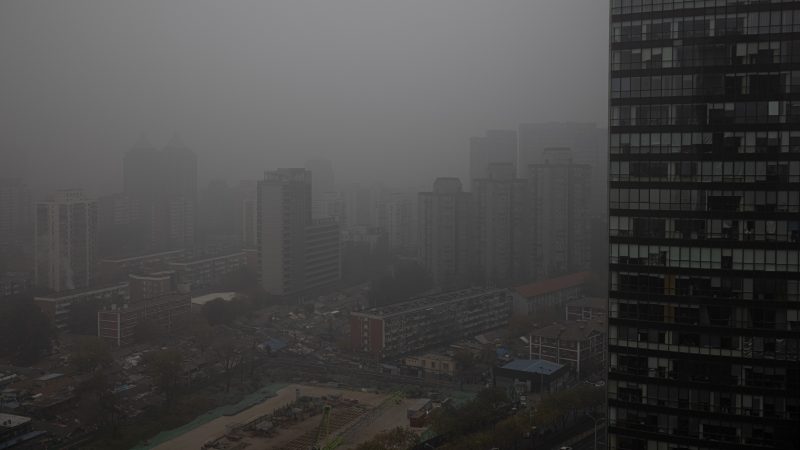 City buildings are seen during a polluted day in Beijing, China, 05 November 2021. China, the world's largest polluter, has promised to the UN to bring its emissions to a peak before 2030 and cut them to net-zero by 2060. [EPA-EFE/ROMAN PILIPEY]

Indonesia, Poland, Vietnam and other nations pledged on Thursday (4 November) to phase out use of coal-fired power and stop building plants, in a deal at the COP26 climate summit that failed to win support from the United States and large coal consumers such as China.

Britain has said one of its main aims for the United Nations summit is “consigning coal power to history”. The deal saw 23 nations making new commitments, a move the president of the COP26 summit, Alok Sharma, said put the end of coal “in sight”.

Some of the world’s biggest coal-dependent nations, such as China and India, were notable in their absence, raising the question of whether COP26 had underwhelmed on the drive to consign the most polluting fossil fuel to history.

“Today I think we can say that the end of coal is in sight,” Sharma told the Glasgow meeting.

He later told a news conference it had been a personal priority since becoming COP26 president to consign coal to history and that now “I think you can say with confidence that coal is no longer king”.

Greenhouse gas emissions from burning coal are the single biggest contributor to climate change, and weaning the world off coal is considered vital to achieving global climate targets.

Signatories of the COP26 agreement agreed to phase out coal-fuelled power generation in the 2030s in richer countries, and the 2040s for poorer nations. A majority also committed to shun investment in new coal plants at home and abroad.

With the line up and pledges of countries changing up until the deal was announced, the absence of China, India and Australia threw a shadow over the attempt to win global backing for an exit from coal. The United States declined to sign the pact.

I've worked on coal phaseout for 8 years and no coal phase-out was a big bang, it’s 100 small steps.

Today many countries took a lot of steps.

Also China, India and others will be emboldened to take a few steps they wouldn’t otherwise.

Some experts said the deal was a step forward. It came alongside an announcement by the Powering Past Coal Alliance, an international campaign, which on Thursday said it had secured 28 new members, including Ukraine, to pledge to quit coal.

Antony Froggatt, deputy director for the environment and society programme at London’s Chatham House think tank, said the announcements were “notable for what is absent as much as what is new”.

“It highlights how uneven the transition to cleaner energy is across the globe,” he said.

The commitments are not binding, and some signatories have said they will not be able to phase out coal without financial help from other countries.

“We need to have funding to retire coal earlier and to build the new capacity of renewable energy,” Indonesian finance minister Sri Mulyani Indrawati told Reuters on Wednesday.

Britain hopes the summit in Glasgow will produce enough commitments to keep within reach the target of limiting the global temperature rise to 1.5 degrees Celsius (2.7 Fahrenheit) above pre-industrial levels. That would require the world to reach net-zero carbon emissions by 2050.

Britain has largely eliminated coal from power generation, but has yet to decide on proposals for a new coal mine in Cumbria, northwest England, intended to extract coking used for steel production.

The COP26 deal covers coal-fuelled power generation, but not its use in industrial manufacturing.

The COP26 summit has so far yielded deals on coal, deforestation and methane, but a clear picture has yet to emerge on what these voluntary initiatives would add up to in terms of lowering temperature rises.

A Polish government spokesman said the country’s commitment would see it end coal use in the 2040s. Poland had previously agreed to stop mining coal by 2049.

Campaigners called for an earlier end-date and firm policies to make sure Poland delivered. “Poland must set a clear and concrete plan to phase out coal by 2030 at the latest,” Joanna Flisowska of Greenpeace Poland said.

Britain said it hoped the coal deal, with its initial signatories, would spur others such as China and India to join.

The COP26 summit has so far delivered roughly $20 billion in funding to help countries phase out coal, Britain said.

🚨BREAKING🚨 #FossilOfTheDay goes to Poland!🇵🇱Gov has the audacity to hide behind small print to dodge any meaningful commitment to #EndCoal.This is while all alarms are off,many are already suffering due to #ClimateCrisis & we urgently need #ClimateAction https://t.co/KwpOEBnFBn https://t.co/7RKDEq2OKi