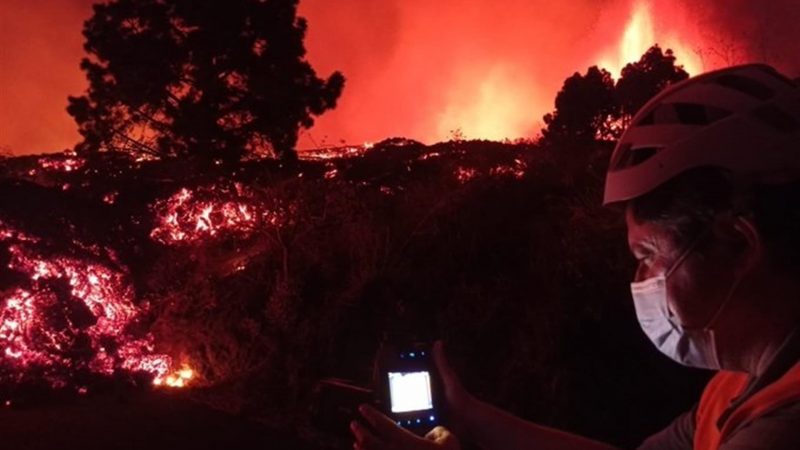 The eruption spewed lava and a dark column of pyroclastic ash into the air and magma rose to the surface through eight fissures in the mountainside. The subsequent lava flows are moving at an average of 700 metres per hour, slowly devouring trees, houses and land as it moves down the sparsely populated slopes. [EFE/Involcán (alavuncha)]

A volcanic eruption on the Spanish Canary Island of La Palma has led to “devastating” scenes as a six-metre-high lava flow devoured houses, infrastructure and farmland in its path to the ocean forcing the evacuation of some 5,000 people. There have been no human casualties, a regional official said Monday (20 September), EURACTIV’s partner EFE reports.

The eruption occurred at 3:12 pm local time on Sunday in the Cumbre Vieja volcanic ridge area in the south of the island.

Specialists had prepared for the event having monitored thousands of tremors in the region in recent weeks.

Mariano Hernández Zapata, head of the local council, thanked the scientific organisations for having predicted the eruption, which allowed authorities to evacuate some 5,000 people from at-risk areas.

“100% of the people are safe,” he said, adding that authorities could turn their attention to infrastructure damage and the loss of homes to the lava flow, which is expected to reach the east coast of the island.

La Palma is the most north-westerly of Spain’s Canary Island archipelago.

The eruption spewed lava and a dark column of pyroclastic ash into the air and magma rose to the surface through eight fissures in the mountainside. The subsequent lava flows are moving at an average of 700 metres per hour, slowly devouring trees, houses and land as it moves down the sparsely populated slopes.

The volcano has emitted between 6,000 to 9,000 tons of sulfur dioxide (SO2) into the atmosphere in the last 24 hours, according to the Canary Island Volcanology Institute (Involcan).

Between 17 to 20 million cubic metres of lava is expected to flow from the eruption point but a secondary eruption is not likely, the regional president of the Canary Islands, Ángel Víctor Torres, told reporters.

The National Geographical Institute and Involcan have been registering thousands of small earthquakes around the Cumbre Vieja since 11 September. Those started more than 20 kilometres underground, but were moving steadily toward the surface as magma worked its way upward under huge pressure from below.

Spain’s Prime Minister Pedro Sánchez postponed his trip to the United Nations General Assembly in New York to travel to the island and oversee operations.

Since records have been kept – starting with the conquest of the Canaries in the 15th century – La Palma has been the site of seven of the 16 volcanic eruptions the archipelago has experienced.

The Cumbre Vieja is one of the most active volcanic complexes in the Canary Islands and is the site of two of the last three eruptions registered in the area, the San Juan Volcano in 1949 and the Teneguia Volcano in 1971.

La Palma, like the rest of the Canary Islands, is of volcanic origin, and its estimated age of two million years makes it one of the youngest islands in the archipelago.