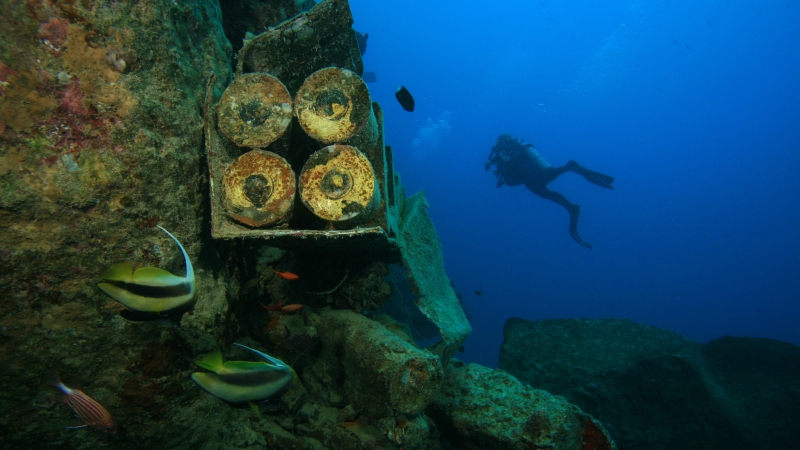 Europe’s destructive twentieth-century conflicts resulted in thousands of tonnes of conventional and chemical munitions dumped into European waters. Today, these corroding weapons pose a danger to human health and to maritime economic activities. Now, more than ever, these dumped munitions must be cleared, says MEP Anna Fotyga.

Anna Fotyga is a Polish EU lawmaker from the European Conservatives and Reformists (ECR) Group and a member of the European Parliament’s Committee on Foreign Affairs.

You recently organised, with the ECR group, an event on clearing chemical and conventional munitions from the sea, most of which have been underwater for decades. Why do you feel that now is the right time to address this issue and what did you want to highlight with the event?

There’s no question that we have been dealing for decades with weapons or remnants of weapons, both chemical and conventional, all over the world.

These are primarily remnants of the Second World War, but some have been there since the First World War. What has changed is our thinking and the positive opportunities coming from technological development. What was considered impossible to grasp in terms of the scope of the problem now is much more possible.

We also no longer think of the Baltic Sea or other seas as a dumping site for weapons. Now, we think about the climate consequences, we think about environmental protection, and we also think about public health. We know that the deteriorating state of those dumped munitions may negatively or even devastatingly influence the health of people.

We also increasingly think of possibilities to invigorate the economic use of seas, like the Baltic Sea or the North Sea.

Today, we are able to clearly define the barriers [dumped] munitions pose to a variety of human activity and to life in seas. And therefore, with the possibilities of innovative technologies, we once more approach this problem.

This event that I was able to host gathered important speakers from all over the world to discuss this problem – from the University of Hawaii, from Canada, from the whole of Europe including EU commissioner Virginijus Sinkevičius, deputy prime minister of Poland Jacek Sasin, and high ranking diplomats of the Council of Baltic Sea States, national diplomats, military commanders, and renowned scientists.

Speaking at the ECR event, EU Environment Commissioner Virginijus Sinkevičius warned that the economic threat posed by these munitions is becoming more acute. What threat do these weapons pose to the blue economy?

Every sector of the blue economy may be endangered by [dumped munitions]; there are agents within the scope of chemical weapons that are simply disastrous for human beings.

Any human activity, be it fisheries or construction or even navigation, that comes into incidental contact with some of those chemical agents may result in disastrous consequences. That is one thing.

Secondly, when we speak about fisheries, the same agents attack species living in seas. So, it may indirectly endanger those who eat fish.

It is particularly detrimental to tourism, and we know that countries all over the world look to their seas as an enormous possibility to enhance their national economies.

For Europe, it is extremely important – the Baltic Sea is an area for sailing, for sunbathing, for a variety of tourist activities, and the impact of this kind of danger is more than obvious.

There are also already programmes of activating offshore terrains to produce energy through wind turbines. And obviously, a danger is posed to this kind of investment without eradication [of underwater munitions].

What I think is in the best interest of all of us, of the general public, is to engage to diminish or to eradicate this problem.  It is more feasible now than decades ago because of technological progress. New technologies enable us to successfully detect and neutralise those harmful agents.

What type of solutions are available to clear munitions from Europe’s waters?

There are a variety of concepts on how to do this. But all speakers [at the ECR conference] agreed that the time has come to undertake action.

Individual actors now use different tools and methods. Some are used already by Americans, by Canadians, by Japanese, some are used by Baltic states. There is also minesweeping activity led by NATO or NATO allies already taking place in the seas.

I wouldn’t like to suggest which particular method of clearing dumped munitions is better and in what situation. It is up to scientists and technical experts certainly.

We had a panel during our conference in which the business community showed novel approaches in their methods and indicated new and innovative possibilities.

Should the navy be involved in clearing munitions, or do you see it as a private sector issue?

When you’re speaking about the navy, you clearly speak about the security and defence aspect of this only. And as I outlined in this interview, it is much broader. It is about the environment, it is about public health, and it also covers areas including trade, civil navigation, commercial navigation, and other economic activities.

I think that perceiving this problem only in the defence or military aspect was a major barrier to taking action until now. What I see as a possibility for a new approach is action taken in the civilian remit as well. [Underwater munitions] present a danger to communities larger than national divisions.

As an MEP and a politician, I am predominantly engaged in defence, security, and foreign affairs. But in this issue, I clearly see contemporary civilian problems that need solving.

In terms of the geography of clearing waters, it tends to fall to certain member states. Could you expand on what the role of the European Union should be here?

When we speak about territorial waters, it is, of course, a responsibility of member states. Nevertheless, these are remnants of the Second World War and, while no member state refuses to clean its waters, we have to remember which countries attacked and which were the victims.

As you can see, the situation is complicated and I believe that it is time to discuss this issue as a European responsibility as well.

Joint political consent and action are needed to solve this problem. Otherwise, we are simply immersed in a variety of historic discussions that are not necessary, and we’re not adding to the positive solution of this problem.

Commissioner Sinkevičius gave a speech [at the ECR event] and it was attended by members of the Directorate-General for Maritime Affairs and Fisheries (DG MARE). Europen Commission officials were present throughout the debates, monitoring the sequence of events, listening to the arguments.

We intend to attract also other institutions and organisations. I think that the UN is a very good platform for action as they have the same kind of interest in this topic.

Knowing well how complicated the process may be, I remain cautiously optimistic because I see momentum. [Under past EU-funded programmes in this area] everything was focused on mapping and assessment. Now we have to introduce pilot programmes and, if successful, continue this.