French meteorological service, Météo France, is forecasting drier than normal weather over north-western Europe, including much of France, over the next three months. Temperatures should also be above normal for the entire old continent. [Shutterstock]

Ahead of a summer that promises to be particularly dry and hot in Europe, France’s ecological transition ministry is mobilising water stakeholders to anticipate shortages and avoid supply disruptions. EURACTIV’s partner le Journal de l’environnement reports.

53 French departments are now at risk of a summer drought according to the inventory published on Thursday (14 May) by the ecological transition ministry following a national water committee meeting.

Between May and September, the Rhône corridor is likely to be the most affected, ahead of the Grand Est, Bourgogne Franche-Comté, Centre Val-de-Loire and part of New Aquitaine. Overseas, Martinique and Guadeloupe are already subject to high water shortages.

According to this map, based on a hydrological analysis carried out on 22 April using data from 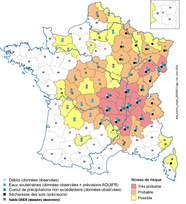 France’s meteorological service Météo France, the geological and mining research bureau (BRGM), the office for biodiversity (OFB), EDF and the French navigation authority (VNF), the risk of drought is “very probable” for 11 departments (including Grand Massif Central, Haute-Saône and Haut-Rhin), “probable” for 24 others (including Centre-Val de Loire and Grand Est) and “possible” for the remaining 18.

In particular, Météo France is forecasting drier than normal weather over north-western Europe, including much of France, over the next three months.

Secretary of State Emmanuelle Wargon wants to force departments to be better prepared for drought. A ministerial instruction is in the pipeline to harmonise restriction measures when it comes to water use at the national level, most likely by setting activation thresholds based on the air pollution control model.

Better coordination, especially between departments, should allow for “taking decisions more quickly so that the sharing of water uses is done under the best possible conditions”, in case of shortages, “with priority given to drinking water supply”, she specified.

To avoid any supply risk, the impacts of climate change will have to be taken into account in the drinking water component of the ORSEC plan, France’s generic plan in case of a disaster when local means turn out to be insufficient.

Wargon also recalled that France has been affected by “regular droughts” in recent years. Most recently, the summer of 2019 was particularly dry, prompting 73 departments to impose restricted water use, while 13 departments, including Creuse, experienced a disruption in the supply of drinking water.

The intense drought in France has already led to the elimination of fallow fields. It has also created tensions that are not so favourable to the negotiations over the EU’s new Common Agricultural Policy. EURACTIV France reports.