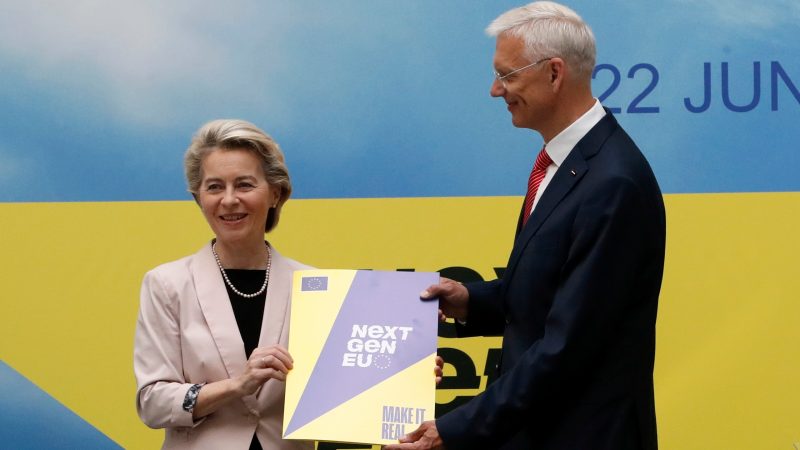 Under rules agreed in December, the national plans that EU member states must submit to the European Commission in order to tap into the EU’s €750 billion COVID recovery fund must dedicate at least 37% of spending to green investment.

But there are concerns that this will not be the case – as well as fears around the amount of funding set aside for fossil gas and a lack of money dedicated to biodiversity.

“This is not a box ticking exercise,” said Christophe Jost, a campaigner at CEE Bankwatch Network. “If the plans are not in line with EU rules on climate and biodiversity, then the Commission must send member states back to the drawing board. We cannot fail to prepare for a green and just transition,” he said.

In April, the NGO analysed the draft spending plans of eight central and eastern European countries and found gaps between their proposals and the European Commission’s requirements, including a failure to meet the 37% threshold for investment in a green transition.

This is a trend across Europe. Few countries passed the 37% bar, according to analysis in early June by the Green Recovery Tracker, which found that, out of 16 countries studied, only two – Finland and Germany – surpassed it.

Italy, Poland and Portugal did not even set aside 20% of the money for green investment, the analysis found.

Even Germany has been criticised for how it got to the 37%. Green MEP Sven Giegold warned the country was siphoning the greenest investments away from its nationally-funded recovery plan and into the EU one to make it look better.

“The plan is 80% cherry-picked from the national recovery plan. In the larger national plan, only 21% is dedicated to climate protection. The best looking measures have been recycled into the EU plan,” Giegold said.

Overall, the analysts warn that the plans are not in line with the EU’s 2030 climate target.

There are also concerns about spending on fossil fuels, which are in theory excluded from EU funding by the so-called ‘Do No Significant Harm’ criteria applicable to the wider EU budget.

Under the DNSH criteria, any fossil gas project must be future-proof and pave the way for renewable or low-carbon gases such as hydrogen, but there are concerns that some projects do not draw a clear line.

For instance, the Bonn-based ZOE Institute for Future-Fit Economies has highlighted that a lack of detail in Romania’s recovery plan makes it impossible to gauge whether gas projects are future-proof or not.

Collectively, Bulgaria, the Czech Republic, Poland, Romania and Slovakia plan to spend over €2 billion on gas investments, according to Bankwatch.

The NGO has warned that proposals like replacing old heating systems with gas boilers and hydrogen ready pipelines, do not comply with Europe’s Green Deal objectives or the recommendation from the International Energy Agency to end funding for fossil fuels.

‘Do no significant harm’

Bankwatch also highlighted concerns when it comes to applying the DNSH criteria.

“The ‘do no significant harm’ principle is supposed to be a rigorous and effective tool to ensure investments do not harm climate or nature. Yet, in many cases Member States have failed to properly apply this principle, opening the door for approving harmful measures that will severely impede the achievement of the EU’s climate and biodiversity objectives,” said Dan Thomson, biodiversity policy officer with CEE Bankwatch Network.

Similar analysis came from the ZOE institute, which found that none of the 13 plans it studied sufficiently applied the DNSH principle, often overlooking risks to biodiversity or addressing social disparities.

“The actual recovery will depend on whether the investments and reforms made today will support the green and just transition that Europe needs to realise. But despite far-reaching efforts, there are still gaps between the ambitions and what is actually being planned by member states,” said Elizabeth Dirth, senior policy consultant at the ZOE institute.

So far the European Commission has endorsed nine recovery plans from EU countries. These still need to be approved by the 27 EU member states who will vote on each individual plan in the EU Council of Ministers. The vote will take place by a qualified majority, meaning no single country will have a veto right.

Twenty-four plans have been submitted so far to the European Commission, with Bulgaria, Malta and the Netherlands still to hand theirs in.

Asked about the issues highlighted, a European Commission spokesperson told EURACTIV: “Each Member State is responsible for presenting evidence on the overall share of climate-related expenditure in its plan based on a binding climate tracking methodology. Member States shall also demonstrate that all proposed measures comply with the do no significant harm (DNSH) principle.”

“When assessing the plan, the Commission will scrutinise whether the climate target is reached and whether the DNSH principle is complied with. A plan that does not reach the target or which contains measures that that do significant harm to environmental objectives will not be accepted,” they added.