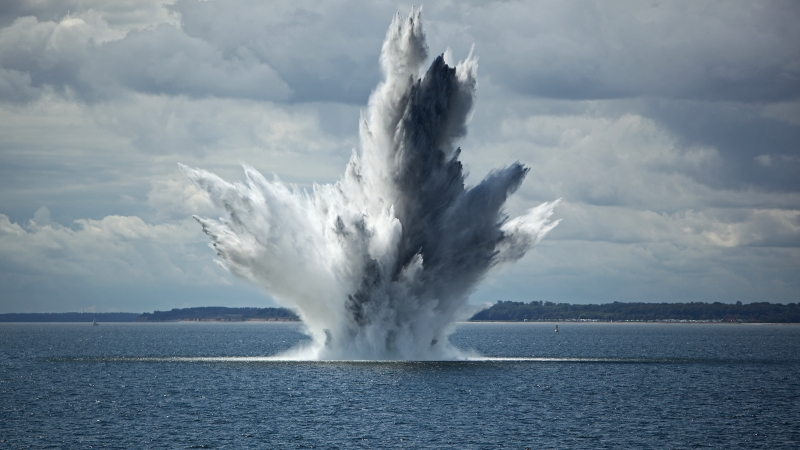 "We need to be aware of the risks. We need to assess them carefully. And we need to take action," the EU Environment Commissioner Virginijus Sinkevičius said of the threat posed by underwater munitions. [christianthiel.net / shutterstock.com]

The installation of offshore windfarms and a greater emphasis on laying undersea cable for energy and digital reasons enhances the likelihood that these weapons will be disturbed, potentially leaking harmful chemicals into the ocean, or even triggering an explosion, the Commissioner warned.

Dumping obsolete, damaged, or expired munitions into the sea was considered a safe and cost-effective method of disposal until the late 1960s and was widely carried out following the end of both world wars.

However, a leakage in the munitions could create a danger for seafarers, marine life and human health, the environment chief said. Many of the weapons are already greatly corroded, having been underwater for over 70 years.

It is estimated that the Baltic Sea alone has around 50,000 tonnes of chemical munitions, 500,000 tonnes of conventional weapons, and 10,000 wrecks on its seabed. Off the Belgian and Dutch coast, around 35,000 tonnes of munition were dumped after the first world war.

“We need to be aware of the risks. We need to assess them carefully. And we need to take action,” Sinkevičius told a conference on clearing unexploded munitions from seas, held last week by the European Parliament’s European Conservatives and Reformists (ECR) Group.

“A safe and secure maritime space is essential for preserving the EU’s strategic interest, such as freedom of navigation, border control, the supplies of essential materials, or indeed our food security,” he added.

The Commissioner’s concerns were backed by Polish deputy prime minister Jacek Sasin, who called the dumped munitions “a ticking chemical bomb at the bottom of the Baltic Sea”.

Sasin said it would be irresponsible to pass the task of clearing up Europe’s seas to future generations and called for interinstitutional and cross-border cooperation.

“Let me remind you that Poland fell victim to the countries that invaded us and that dumped munitions at the bottom of the Baltic Sea. We cannot be the only ones to pay the price,” he said.

Sasin also warned that Europe risks an “environmental disaster” unless action is taken.

The current naval policy is aimed at removing risks rather than clearing dumped weapons, which generally means that underwater munitions are detonated in a controlled way, Commander Herman Lammers, director of the NATO Naval Mine Warfare Centre of Excellence, explained.

When it comes to mines, detonating them is a faster and safer option, but it of course comes with environmental risks, he said.

This approach was criticised by Terrance P. Long, the head of a Canadian NGO pushing for the clearance of underwater munitions, who called for a halt to blowing up munitions in the ocean.

Doing so, he said, destroys fish life and causes noise levels of over 300 decibels.

Long also condemned the lack of international cooperation on the issue, saying that most environmental charters aimed at healthy oceans neglect that “munitions have the ability, by themselves, to destroy the ocean.”

“I honestly believe that we’re not able to clean up munitions or address them adequately with the existing protocols and international conventions that are available today,” he said.

Dr Margo Edwards of the University of Hawaii shared the US state’s experience of clearing munitions. The ocean surrounding the Pacific islands was used as a dumping ground for chemical weapons following World War II.

The Japanese attack on the port of Pearl Harbour during the war also resulted in munitions, planes, and shipwrecks settling on the seabed.

These machines, equipped with robotic arms, found that some of the chemical munitions in the ocean were heavily corroded.

Dr Edwards argued action is needed rapidly before the metal casing of the weapons corrodes entirely.

“I worry that by waiting, we might be waiting too long,” she said.

In April, the European Parliament passed a resolution calling for the European Union to forge plans for the removal of shipwrecks and chemical munitions.

Vaidotas Verba, Lithuania’s ambassador to international organisations in Vienna, called on the European Commission to establish an expert group to map exact locations and to propose sustainable solutions to monitor and clear the munitions.

ECR group MEP Anna Fotyga, the organiser of the conference, called on the Commission to commit to providing funding for efforts to clear munitions from seabeds.

“The time to take steps is now,” she said.

Her plea was echoed by fellow ECR MEP Kosma Złotowski, who also called for the Commission to invest to prevent further harm.

“Economy, science, politics – we must unite those three parts to achieve the simple purpose which is to avoid real catastrophe,” he said.