The climate cost of the new space race 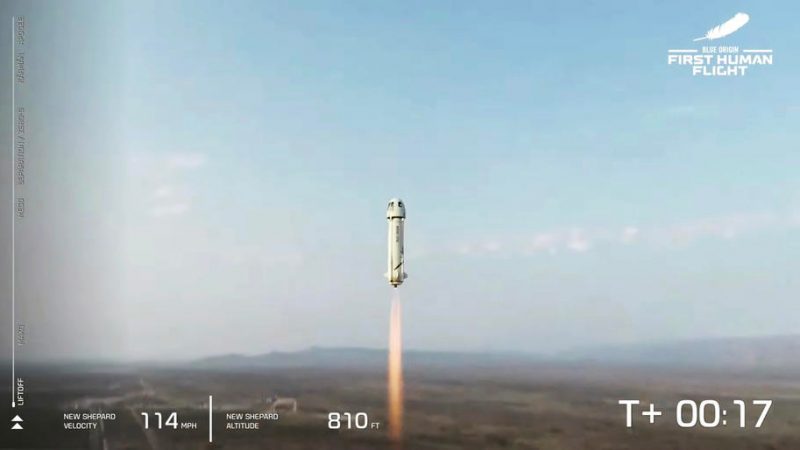 Space tourism has become a reality in the last month, with two billionaires jetting off to brush the edge of space in ground-breaking technology, but the CO2 emissions of such trips could carry a heavy price for the climate.

On 11 July, Virgin Group mogul Richard Branson took off in a rocket plane, with Amazon tycoon Jeff Bezos hot on his heels on 20 July. The two successful trips are a boost for space tourism, which is already seeing people booking tickets worth hundreds of thousands of euros to touch the stars.

Virgin Galactic aims to put on 400 trips per year in the long term and to add more spaceports around the world, a spokesperson told EURACTIV. Meanwhile, Bezos claims to have sold nearly $100 million worth of tickets for future passenger flights.

Other countries, including China and Russia, also have their eye on such trips, according to Ricardo Conde, President of the Portuguese Space Agency.

’74 trips around the Equator’

But such space odysseys could come at a heavy price for the climate.

According to analysts from S&P Global Sustainable1, a commercial space launch using conventional fuel types generates 518 tons of CO2 emissions. That is the equivalent of one car travelling 1.8 million miles by land, the equivalent of 74 trips around the equator.

That could increase to 130,000 tons of CO2 emissions, based on industry forecasts that there could be 250 launches per year by 2025.

“The wealthiest 1% are already responsible for around 50% of aviation emissions. That needs to come way down, but space tourism is going to add gigantic quantities of carbon and other pollutants into the upper atmosphere,” said Greenpeace EU climate and transport campaigner Lorelei Limousin.

Virgin Galactic flights have a carbon footprint that is approximately equivalent to a return business class seat on a flight between London and New York, a spokesperson told EURACTIV, adding that the company is committed to minimising their impact on the environment

Bezos’ company did not respond to EURACTIV’s request for comment, but Bezos has said his journey made him more determined to tackle climate change.

“When you look out at the planet, there are no borders … there’s nothing. It’s one planet and we share it, and it’s fragile,” he said in an interview with MSNBC news in the US.

He added that, in decades’ time, polluting industries should be moved into space – an idea Limousin called “hare-brained”.

Benefits for the climate

Some believe these missions will help to tackle climate change, including through more reuse and recycling in space technology and boosting the use of satellite observation to track global warming.

Space tourism missions allow companies to practise over and over again to help build circularity, according to Bezos.

Alongside this, the evolution of space technology could help lower the cost of sensors and allow smaller, cheaper crafts that provide real-time data on climate change to be launched. That would mean quicker warnings for extreme weather and better modelling on the impact of climate policy.

“When we are talking about access to space, if this becomes more and more popular, we are thinking to remove or to reduce the costs to put sensors in orbit,” said Conde.

We do need to be aware of the emissions created, but there are also opportunities, he added.

“If you ask me if I’m concerned, of course, I’m concerned with the fires here in the south of Europe, because this is a big problem, but I’m also looking at this as an opportunity that the technology can tackle these problems,” he told EURACTIV.

The mindset has also changed over the past decades to approaching the topic from a green perspective, he explained, saying there is now more focus on ecological space exploration – and exploration that does not leave debris in orbit.

Because more and more trips like this bring another problem – there simply may not be enough space in space.

The amount of space debris and increasing demand for orbit space is one of the main concerns and requires close international cooperation, said Conde.

New systems need to make sure that every part of the craft returns to Earth rather than leaving more debris in the atmosphere. There also needs to be some sort of system to gather up existing space debris or force it to make a re-entry, he added.