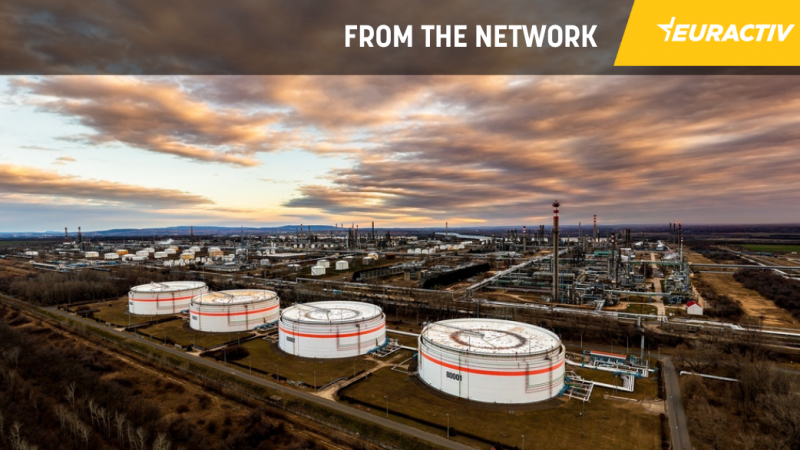 As the European Union prepares a full-scale embargo on Russian oil imports, EURACTIV takes a closer look at some of the companies that have so far profited from the trade within the bloc.

Hungary and Slovakia are set to be granted more time to implement the ban, and will be able to continue buying Russian crude oil until the end of 2023 under existing contracts, EURACTIV understands.

This may be explained by the presence of a single fossil fuel company – MOL – an integrated oil and gas firm from Hungary which operates refineries in the two countries, as well as in Croatia.

Hungary was until recently one of the staunchest opponents of an oil embargo over fears it could paralyse its economy. But it may have had other motives for its opposition. To protect domestic consumers from rising fuel prices, Hungary capped petrol prices in the autumn, a measure the government decided last week to extend until 1 July.

The costs of the price freeze are currently divided between big players, small retail petrol stations, and the government. The Budapest government provides some tax benefits and subsidies but these still leave small retailers to cover their own operating costs, which has led some of them to threaten a lawsuit, Forbes Hungary reported.

Meanwhile, MOL, the Hungarian fossil fuel giant that occupies about two-thirds of the Hungarian market, has seen its loss from the price cap largely covered by an increase in margins from oil refining.

The company’s refining margins jumped to staggering levels in March, according to media reports.

Compared to the previous ten-year record of $9.3 per barrel on refined products, MOL earned $34.9 per barrel of oil refined in March. This is largely due to the much lower price of the Russian export oil blend (REBCO) used in MOL’s refineries compared to other types of oil.

Those prices have been pushed down even further by the sanctions imposed on Russia by Western countries.

However, analysts say this is not purely due to the sanctions. Tamás Pletser, an analyst at Erste Securities in Budapest, said cheaper Russian oil is not the only reason why margins have risen.

“Profits from diesel production are also significantly higher. Even before the war, there was a global shortage, and the Russian invasion multiplied that,” he said.

EURACTIV has reached out for comments to the MOL Group but has not received a reply before publication.

Things are similar on the margins front in Poland, although they result in different political outcomes. The country’s largest company processing crude oil, PKN Orlen, runs six refineries: three in Poland, two in the Czech Republic, and one in Lithuania. However, it managed to decrease its dependence on Russian oil from 90% in 2017 to about 70% in 2020.

It has also profited from the volatility of the market: while in February, the company’s refining margin was $7.70 per barrel, in March it was already $39.30.

Yet, the company is willing to get off Russian oil. “If the EU imposes a ban on Russian crude oil, PKN Orlen will comply with such a decision,” Daniel Obajtek, PKN’s executive chairman, told the Polish press agency PAP on 25 April: “We can do this at any time, as we are well prepared.”

Other EU countries are looking at facilities owned by Russian companies. In Germany, two refineries – Schwedt and Leuna – used to import Russian oil although the latter has recently stopped.

Schwedt is owned by Rosneft, and its business model has been described as “importing cheap Russian pipeline oil for refinement” by German Economy Minister Robert Habeck.

The German state of Brandenburg, where Schwedt is located, has a weak economy and is governed by the SPD, the party of Chancellor Olaf Scholz.

In Romania, Petrotel, one of the three ​​major refineries that are currently operational, was bought by Russia’s Lukoil in 1998. Out of a capacity of 2.4 million tons per year, 2.1 million tons were refined from imported oil in 2021.

Lukoil also owns assets in Bulgaria. Lukoil Neftohim Bulgaria, which joined the Lukoil group in 1999, is the largest oil refinery in the Balkans.

Moreover, the Lukoil Neftohim refinery, in the Black Sea port city of Burgas, was built in such a way that it can only refine Russian oil and other rare types of oil from the Middle East.

Bulgarian energy expert Vasil Nachev commented on Tuesday (3 May) that the price of Russian Urals oil used by Lukoil’s refinery in Bulgaria was $37 cheaper per barrel than Brent, the reference on global oil markets.

“The Commission for Protection of Competition must take on the role and check the mechanism by which this price is formed. We have an intermediary there. However, Bulgaria is silent about the import of oil processed in the refinery,” Nachev said.

According to Martin Vladimirov, an energy expert at the Center for the Study of Democracy, a Bulgarian think tank, the intermediary company is Litasco, the majority shareholder of Lukoil Neftohim Bulgaria.

LITASCO was founded in 2000 in Switzerland and it is the exclusive international marketing and trading company of Lukoil.

“The difference goes to Litasco in Switzerland, where there is a very low profit tax and there are legal options that allow this profit not to be taxed and go directly to Russia. In this way, the profit stays in Russia,” Vladimirov told Radio Free Europe.

Lukoil is also present in the Mediterranean. Lukoil Isab, whose refinery is in Italy’s Priolo, in the province of Syracuse, holds a significant share of the country’s refining capacity (around 22%), with an annual production of 16 million tonnes.

It buys 30-40% of its stock from Russia. Last week, Reuters reported Italy was considering the temporary nationalisation of the firm.