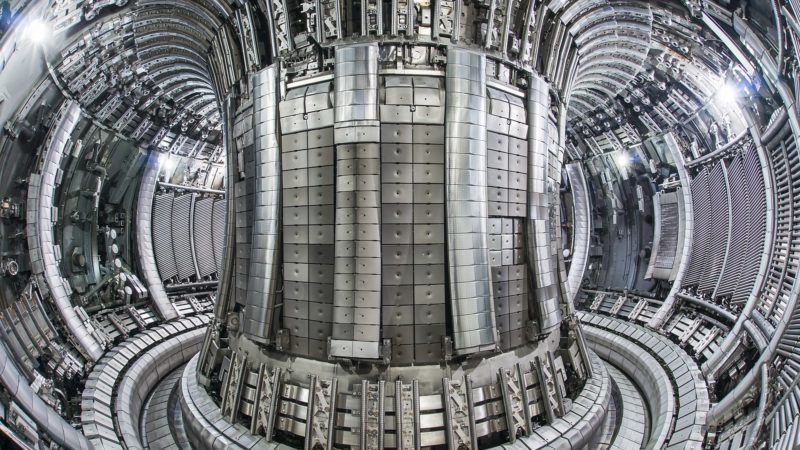 Inside the JET facility. [EUROfusion]

The British government said on Tuesday (27 June) it would continue to fund a collaborative nuclear fusion project with the European Union to 2020 if the bloc extends Britain’s contract to host the facility beyond 2018.

The Joint European Torus (JET) project, located in southeast England at the Culham Centre for Fusion Energy, studies the potential of fusion power as a low-carbon energy source for future generations. It is seen as the ‘little brother’ to the larger-scale ITER project, based in France.

It is currently the only operational fusion experiment which is capable of producing fusion energy and is collectively used by more than 40 European laboratories.

Creating an experimental nuclear fusion reactor is an undertaking that has to face both technical and political challenges. Bernard Bigot, director general of the ITER project, told EURACTIV Spain that the political forces are “more uncontrollable” though.

Britain’s contract to maintain and run the JET project is managed by the UK Atomic Energy Authority and is due to end in December 2018.

Britain’s decision to leave Euratom, the EU’s framework for nuclear energy safety and development, when it leaves the bloc, has raised concerns about future funding of collaborative nuclear research projects.

The government said it was willing to underwrite its share of JET’s running costs until the end of 2020 if the EU extends Britain’s contract to host the facility.

“The UK’s commitment to continue funding the facility will apply should the EU approve extending the UK’s contract to host the facility until 2020,” the government said in a statement.

“A discussion will then take place on the appropriate funding split,” it added.

Under the current funding arrangements, the EU currently provides around €68 million a year, which is around 88% of JET’s running costs.