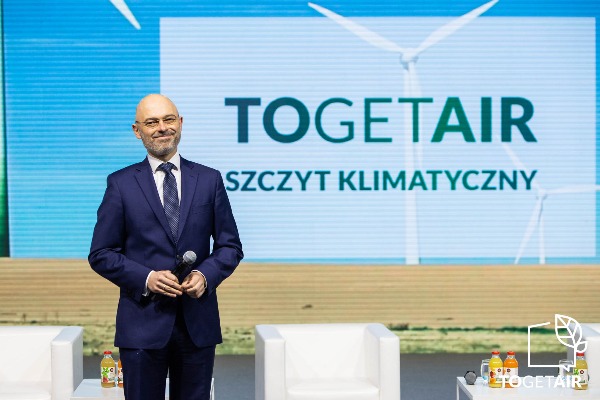 The Togetair climate summit is an annual event taking place in Poland.

New declarations, important decisions, and strong emotions during the debates!

The Summit was opened by the Minister of Climate and Environment, Michał Kurtyka, emphasizing the enormous progress that Poland has recently made in terms of ecological challenges:

“We’ve taken a quantum leap forward in terms of how we want to complete the energy transition.”

The Minister’s opening speech was followed by the official presentation of the first multimedia TOGETAIR Climate Report. “This is the first climate report available to the general public. It is full of studies, descriptions, trends, assessments, and directions for the coming years in the context of a changing climate”, commented Agata Śmieja, President of the Clean Air Foundation and initiator of the TOGETAIR Climate Summit

The Climate Report reached 100 thousand viewers within the first 24 hours upon its publication. It is available online at https://raport.togetair.eu/, free of charge and without registration. The English version is ready and will be supplemented by French and German versions soon.

“Apart from educating Poles and working out the best solutions on the road to climate neutrality in a way that is rational and economically justified for Poland, it is very important to let our European partners know that Poles are working together on ecological solutions and have the ambition to become the leader of ecological transformation in Europe”, added Artur Beck, producer and organizer of the TOGATAIR Climate Summit, President of the Foundation of Positive Ideas

During DAY 1 of the Summit, CTL Logistics and PKP Energetyka signed a letter of intent regarding the Green Railway program. The purpose of the collaboration is CTL Logistics’ shift towards green energy. Pursuant to the  President of PKP Energetyka, Wojciech Orzech, by 2030 it will be possible to power 85 % of the Polish trains with renewable sources.

From 21 to 23 April, the audience could follow debates and thematic panels devoted to Poland’s ecological challenges and concerns.

The first discussion was attended by the Minister of Climate, Michał Kurtyka, who presented his assumptions of Poland’s energy policy and its future energy mix.

Adam Czyżewski – from PKN Orlen – commented that the energy transition will require a change in consumers’ behaviors.

The next panel gathered experts in e-mobility. Representatives of the automotive market, central government, and regulators discussed how to combat the biggest barriers to the development of electric cars, that is, the high price and the still relatively poor infrastructure.

Clean Air Programme was the main focus of the third debate. Panelists emphasized the need for greater EU support in order to intensify the fight against smog. They also tackled the issue of “energy poverty and exclusion” of people with no access to assistance programs.

Finally, Tomasz Urynowicz, Deputy Marshal of the Małopolska Region, pointed out the support offered by local government to businesses at all stages of the value chain.

TOGETAIR 2021 brought a novelty: EKO-RING, a heated confrontation between Jan Śpiewak, a city activist, and Konrad Płochocki, a representative of the Association of Real Estate Developers. The topic was the fight against so-called “betonoza” (Polish equivalent for a concrete jungle), but also new initiatives to improve the image of the residential investment market.

The Summit continued with very important topics – the border carbon tax, green energy in the context of housing and water management.

TOGETAIR Expert Committee gathering specialists representing business, environmental protection organisations, and state authorities formulated 10 Green TOGETAIR Objectives. It is a set of actions to be undertaken by Poland to be ready for the environmental challenges, both in the context of the climate crisis and the policies pursued by the EU.

On Thursday, the debates concentrated on just transition in the context of the future of the Polish energy and mining sectors. The panellists referred to an excellent example of gradual transition completed in the Adamów lignite mine located in the Turek district, where former fossil fuel workers got retrained for green energy jobs. The construction of wind farms on the Baltic Sea as a possible driving force of the Polish economy was pointed out by Wojciech Dąbrowski, President of the Management Board at PGE Polska Grupa Energetyczna.

Maciej Matelski – Director of the Competence Office for Of the passenger car market PKO Bank Polski (PKO Leasing), referred to the price and limited access to charging stations as the main barriers preventing consumers from switching to electric cars.

The next panel concentrated on the fuel of the future – hydrogen. Jacek Jaworski representing the Oil and Gas Institute said: “The gas industry will have to confront with hydrogen, regardless of its origins. (…) Poland has the potential to be at the forefront of the hydrogen market. By 2030, we will probably be able to use hydrogen on an industrial scale.”

Later that day, the experts focused on green transportation. Representatives of the automotive industry were joined on the stage by Tomasz Gontarz from PKP Intercity who spoke about rail as the most ecological means of transport.

The next panel tackled the issue of zero-emission energy systems, especially in the context of Offshore investment which stirred experts’ optimism.

Pursuant to Zbigniew Gryglas of the Ministry of State Assets “We will generate more gigawatts of wind energy than we announced in PEP 2040 and now we are sure of it.”

The fifth debate of the day was devoted to the transformation of system heat with regard to geothermal and biomass energy. The Chief National Geologist indicated the need for synergy of activities: “Combining several sources of energy – geothermal, biogas, photovoltaics – may produce a far better result than using a single source. We are going to run such projects.”

The final panel focused on plastic and the deposit system. The discussion summarized the existing solutions and projects available on the market, indicating trends and possible directions of development. Our guest from Sweden, Anna Larsson, Reloop Platform Director, wished Poland to work towards solutions of the future. “Bringing all single-use packaging under the deposit system creates an opportunity to obtain 590,000 tons of raw material for recycling.”

In his opening speech, the Prime Minister referred to the perspective frequently adopted by experts while discussing Poland’s energy transition: “There are broad swaths of society that cannot bear the cost of the energy transition. The cost must be distributed appropriately, that is, all segments of society must have the perspective of change. (…) Climate change must be socially just.”

Minister of Family and Social Policy, Marlena Maląg, emphasized the role of the family in the whole process: “We must come together to form a broad coalition in support of families and the environment”.

Earlier, during a press breakfast, Konrad Płochocki from the Polish Association of Developers admitted that “samochodoza” (too much traffic) and “betonoza” (concrete jungle) were a mistake. He proposed a new industry initiative –  to beat the Guinness World Record for constructing the largest insect house.

the first discussion on Friday was attended by Minister of Climate and Environment, Michal Kurtyka. “We are able to greatly improve the trade balance by switching from fossil fuel energy to electric cars or photovoltaic panels (even though these are capital intensive investments in the short term)”.

The third debate was about the ESG system and Green Bonds.

“Sustainability and climate neutrality have become one of the most important economic goals of the entire European Union, clearly defined in time. (…)  In this regard, we can observe an increasing number of green programmes or so-called green financial instruments emerging on the market, favouring pro-ecological investments or dedicated exclusively to them. They are fully in line with the values of BOŚ – Environmental Protection Bank, which since its inception has specialized in financing eco-friendly investments”, said Wojciech Hann, CEO of Bank Ochrony Środowiska.

The next discussion was devoted to e-services from the perspective of state and local government as well as the private market. The panellists agreed that the pandemic speeded up digitalisation. Consumers, compelled by circumstances, finally accepted this form of contact while institutions managed to overcome their previous inertia.

The future of housing was brought up repeatedly throughout the Climate Summit. This time, however, the panellists focused on the idea of sustainable urban planning in the context of sustainable development.

Speakers referred to the positive example of Lublin, Gdansk, and Kraków where the circular economy was included in their development strategy by 2030.

One of the most exciting discussions during the entire event regarded the recent garbage fee increase. The panellists focused on the balance of recent waste law reforms and legislative changes that will remodel this market in the coming years. They also called for legislation to be passed as soon as possible to guarantee higher subsidies for waste management.

Friday, April 23, was the final day of the TOGETAIR 2021 Climate Summit – a great event, broadcast live to millions of users across the country.

“TOGETAIR Climate Summit gathered outstanding experts to share their knowledge, experience and inspire valuable changes. We are proud to have created a space for such an exchange of ideas and knowledge. Let me remind just you that you may watch a recorded Summit broadcast all year round”– commented Agata Śmieja, the President of the Clean Air Foundation and the initiator of the whole event.