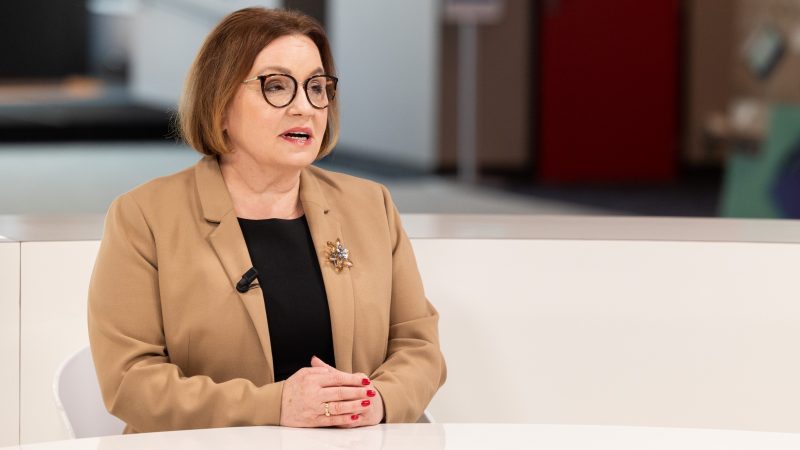 The methodology for establishing 2030 net emissions and removal targets for EU countries in the ongoing revision of the land use directive (LULUCF) is too simplistic and must be changed to reflect the different circumstances of EU countries, writes Anna Zalewska.

Anna Zalewska is a Polish European Conservatives and Reformists (ECR) MEP who sits on the environment and employment committees. She is also the founder and president of the ECR Carbon Sinks Working Group and previously served as the Minister of National Education of Poland from 2015 to 2019.

Nearly two months ago, we started negotiations on formulating compromise amendments to the LULUCF revision in the ENVI committee of the European Parliament.

As the ECR shadow rapporteur, my view is that the priority should be the methodology of allocating targets for each EU member state, which together form the overall EU 27 target on carbon sinks levels in the LULUCF sector.

Some MEPs, thus far, are reluctant to go into this; they feel it is too technical, should be left as is or that it should be left to Council only. I disagree.

From earlier debates in the ENVI committee and LULUCF meetings, MEPs from most Groups in Parliament are convinced that the European Commission’s proposed methodology has produced unfair allocation targets. It is intended to be a simple methodology, but upon inspection, it is simplistic and counter-productive.

Then, the difference between 268 Mt CO2 equivalent and 310 CO2 equivalent, corresponding to a 15% increase, is divided by member states based on a percentage of the “managed land” of the EU.

Furthermore, anomalies and fluctuations, if occurring within a short timeframe, are treated as part of the norm and factor strongly into the national targets for 2030.

Examples include Cyprus and Portugal experiencing devastating forest fires in 2016 and 2017, which may have contributed to sharp net emissions increases in LULUCF in those specific years.

The following year, their net levels returned to their general trends. It is important to connote that, while croplands, wetlands, grasslands, settlements and even harvested wood products (HWP) are relatively stable, generally, forest sink levels fluctuate rampantly in both intensity and frequency.

Arguing that better quality of data, which will be collected in the 2021-2023 period, is better used to assess the trajectories’ yearly targets for 2026-2029 misses the point, as the end 2030 target is being established now.

Thirdly, using “managed land” as the only metric to entirely account for the gap between the 2016-2018 average and the 310 Mt CO2 equivalent target is unhelpfully one-dimensional.

Notwithstanding, for most member states, managed land is almost identical to total surface area; for some, like Finland and Sweden, the discrepancy is larger, boasting the most significant percentage and absolute area of forested lands.

The specific circumstances of each member state are not reflected in these metrics alone, as such, the proposal favours some member states by additionally burdening others.

Having everything comparable side-by-side on an Excel sheet is probably the most transparent way to decide what is fair and feasible. I have opted to do so, proposing, in addition to updating and expanding the base years, to scrupulously adhere to the “no-debit” rule and the “no-backsliding” principle.

The “no-debit” rule, as in the currently binding LULUCF regulation, entails that emissions should not exceed removals in the LULUCF sector, which should be applied to each member state.

This affects Czechia, Denmark, Ireland, Malta, Netherlands and Slovenia. This way, each member state does their fair share, and those with negative net removals are contributing directly to the EU 27 net removals target, rather than compensating for net emissions of others, allowing for all relevant flexibilities.

Croplands, wetlands, grasslands, settlements and HWP are smaller scale than forests at the EU level and, except for HWP, are net positive on emissions.

The “no-backsliding” principle, which still needs integrating into the file, would entail that the new 2030 target for each Member State should not be less ambitious than what they were aiming for with the currently binding LULUCF regulation, at least proportionally.

Assuming the baseline scenario in the Impact Assessment accompanying the LULUCF revision proposal is just that, we can see that Cyprus, Czechia, Denmark, Finland, France, Ireland, Malta, Netherlands, Portugal and Slovenia have less ambitious targets in the revision proposal, and to what proportions.

Finally, the specific circumstances of LULUCF sectors and related ecosystems of each member state are unique. Every MEP has reiterated that this must be factually integrated into the legal architecture of the revised LULUCF regulation.

Some which could be, but have not been considered, include:

My team and I are working on refining the counterproposals, albeit not the whole picture yet. I hope it provides insight, building on the Commission’s Impact Assessment. Votes in the ENVI committee and Plenary are approaching, and it is imperative that we enter trilogue negotiations between Parliament, Council and Commission with a technically sound counterproposal.

The IPCC working group I and III reports accentuate the necessity to increase carbon sinks on a global scale. Going to COP27 with examples of solidarity, proportionality and subsidiarity, the EU will be more persuasive to international partners to increase their own LULUCF-related efforts and better prepared to integrate Ukraine into the EU, hopefully, in the near future.