A hydrogen strategy for a balanced EU-Africa partnership 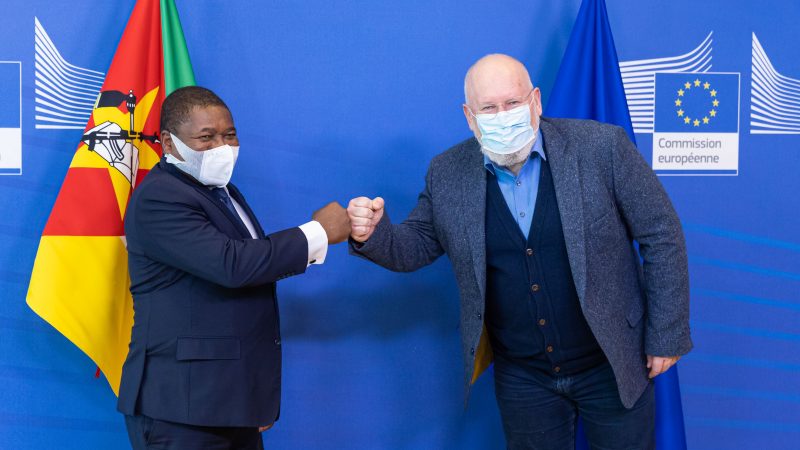 The President of Mozambique Filipe Jacinto Nyusi (L) met with Frans Timmermans (R), the European Commission Vice-President in charge of the Green Deal, during a visit to Brussels on 7-8 February. [European Union, 2022. Source: EC - Audiovisual Service.]

The EU must work with Africa to develop hydrogen as part of a broader economic and development cooperation agenda moving beyond resource production and extraction, writes Eleonora Moro.

Eleonora Moro is a researcher at the independent climate change think tank E3G. Her work focuses on hydrogen, energy systems and the European Green Deal.

Renewable hydrogen is one of the central discussion topics at the ongoing European Union-African Union summit. The EU has made its ambitions to import hydrogen from the African continent clear: in its 2020 Hydrogen Strategy, the European Commission foresees 40 GW of renewable hydrogen electrolysers in the EU neighbourhood, a large proportion of which are expected to be in North Africa, by 2030.

EU interest in importing hydrogen from Africa is driven by the assumption that member states will require significant quantities of renewable hydrogen to decarbonise certain economic sectors (for example, the chemicals industry, steel industry and heavy transport sectors such as maritime and aviation) that exceeds cost-effective domestic potential.

Yet this requires a well-thought-through approach that places cooperation and socio-economic development of African partners at its core.

Although the number of projects is likely to increase given public and private interest, importing hydrogen from Africa raises social, environmental, geopolitical and technical concerns. In countries where energy access is a problem, renewable hydrogen export projects risk diverting energy resources from local electrification and decarbonisation efforts. Environmental concerns include biodiversity loss and exacerbating water shortages.

Geopolitical challenges may arise from unstable political regimes. From a technical and economic perspective, transporting hydrogen represents a challenge due to the very low temperatures or inefficient conversion processes required to ship hydrogen and the need to upgrade or build pipelines that have a limited geographical scope.

For hydrogen not to be stuck in extractive EU-AU dynamics, the EU must put renewable energy deployment, strong sustainability standards and support for the development of climate-neutral industries at the centre of its engagement with Africa. Installing the 40 GW of electrolysers foreseen in the EU hydrogen strategy would require 77 GW of renewable energy capacity.

Africa currently accounts for just 2% of global renewable energy generation capacity, with 54 GW of renewable energy capacity in 2020. To make any significant contribution to the hydrogen imports it envisions and advances domestic decarbonisation efforts, the EU must support African countries in massively accelerating renewable energy deployment and increasing energy efficiency.

Hydrogen trade between the EU and AU can provide substantial economic benefits for African countries. To avoid continued African exposure to the same price volatility as commodity exports, the EU should support the build-up of local climate-neutral industry. This would ensure African countries can export low-carbon products with higher added value than renewable hydrogens, such as fertiliser or steel, building on existing industrial strengths.

In addition, employment opportunities can be generated by building up the necessary local renewable energy capacity and producing low-carbon final products. Greater stability and a strong political partnership with Africa can be the development and geopolitical dividend.

At the EU-AU summit, high-level commitments for greater cooperation on hydrogen have been put in place. The EU must now work with Africa to develop hydrogen as part of broader economic and development cooperation, moving beyond resource production and extraction.