A more sustainable CAP protects us all 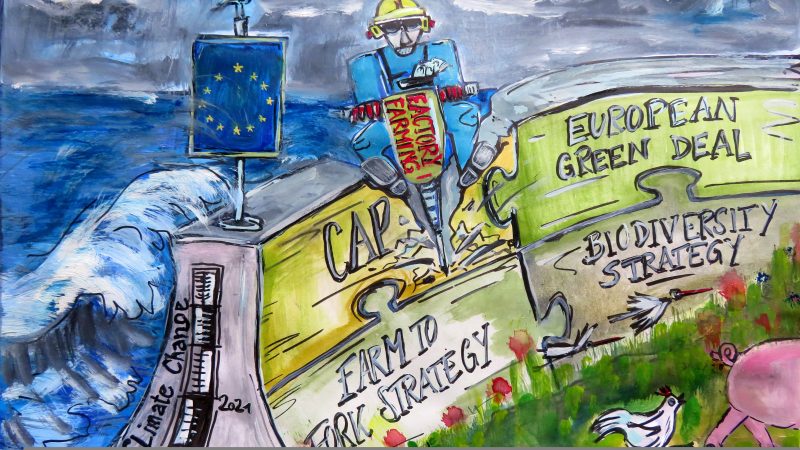 Apart from the COVID-19 pandemic, the climate catastrophe is the largest global challenge that we are currently facing. Every year, sea levels rise, natural disasters increase, rivers dry up and summers get hotter. Wild animal species are dying at a rate that is at its all-time high.

One of the biggest contributors to these issues is large scale industrial animal agriculture. In addition to threatening biodiversity, these large-scale systems emit high levels of Greenhouse Gases, especially methane which contributes to the rise in global temperatures.

Animal waste also contributes to water, air and soil pollution worldwide. The current European Commission has attempted to address these issues with the European Green Deal, the Farm to Fork Strategy and the Biodiversity Strategy.

This shows the drive and will to tackle this problem and set the EU on a path towards a more sustainable food and farming future. However, the CAP in its current state is a roadblock that stands in the way of effective solutions.

The recent report on the CAP and climate spending by the European Court of Auditors underlines that the CAP does very little to lower emissions from livestock farming, which have not decreased in the past decade. It does not incentivise a reduction of herd sizes, despite the fact that a significant portion of those emissions is directly related to large herd sizes.

However, extensive pasture-based farming with lower stocking densities would cause significantly less environmental damage and emissions support carbon sequestration and could benefit animals. The majority of Europeans are over-consuming animal products.

Despite scientific consensus as to the negative impact of animal products on the planet, the CAP’s market measures not only aim to further promote animal products but also put marketing and naming limitations on the sale of plant-based products.

Consumers show an increasing readiness to pay higher prices for products with lower environmental impacts and higher animal welfare standards. By introducing fair pricing for animal based products that reflects the costs for farmers and the environment, producers would not only be compensated properly for their products, but we would also support

Europeans in adopting a more sustainable diet, shifting to plant-based alternatives and reducing animal products. A future-oriented CAP needs to take this into account.

While higher standards are, obviously, harder to fulfil, an ambitious CAP that supports farmers who are willing to implement high environmental and animal welfare standards will benefit everyone in the long run.

Animal agriculture is not only one of the biggest contributors to the climate catastrophe, but the farming sector is also amongst the sectors most threatened by the consequences of the rise in global temperatures.

Drier, hotter summers make it harder to grow animal feed, high temperatures in stables negatively impact animal health and natural disasters can wipe out an entire year’s harvest. A future-oriented CAP that focuses on promoting sustainable, low-impact farming practices is therefore not only beneficial to the animals but also the farmers.

It is clear, that we need to drastically reduce the amount of animal products consumed and shift towards lower intensity, lower impact farming methods and more plant-based foods.

In order to make this shift, we need a CAP that incentivises producers to move towards those methods and promotes only products that do fulfil certain environmental standards and support a transition towards the production of plant-based proteins instead of livestock.

Without such incentives, it will be impossible to meet the binding targets of the Paris Agreement and the objectives of the Green Deal.

A strong CAP that includes high animal welfare measures as well as environmental standards does not only play an important role in our battle against climate catastrophe but is key in protecting public health.

Factory farming precipitates the spread of multidrug-resistant bacteria and contributes to antimicrobial resistance and also poses a risk for future pandemics.  These farms are ideal breeding grounds for diseases to quickly spread between stressed and sick animals, mutate and eventually infect humans.

Diseases like swine flu, bird flu, SARS and BSE have caused scientists to warn us repeatedly about factory farming and the rapid spread of COVID-19 on mink farms has illustrated the dangers of having so many animals confined in such small spaces.

At the upcoming trialogue, member states and the European Parliament have a last chance opportunity to secure a CAP that can contribute to a safer future for European Citizens, animals and the economy by promoting and incentivising responsible farming practices.

We urge them to take this chance and set the European Union on a path towards animal welfare, sustainability and protection from environmental damages and biodiversity loss. We need a CAP that protects the well-being of all Europeans and the generations to come.