A sustainable future for Ukraine – the new Marshall Plan 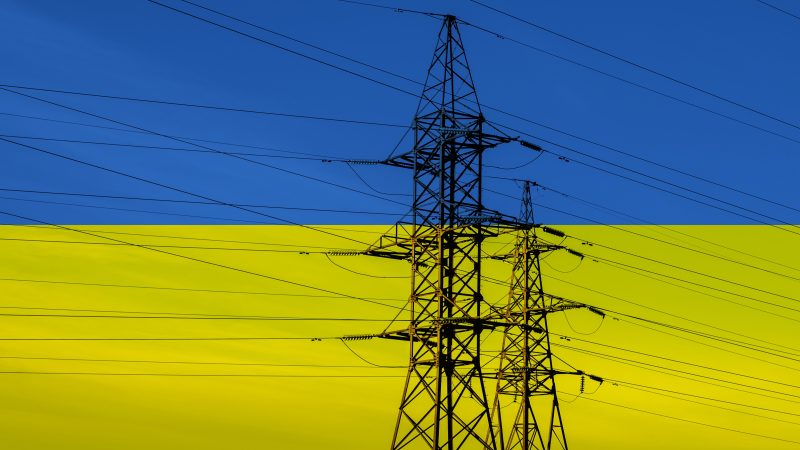 Russian aggression in Ukraine and Putin’s energy blackmail have added to the urgency to completely decarbonise Europe and call upon us to accelerate this effort at a war-time pace. Today direct links between the European Green Deal and geopolitics are undeniable: the energy transition has become a security and defence issue for the EU. [Shutterstock / Cloudy Design]

As Ukraine continues to count its losses, it is up to the European Union to start preparing a plan to help its recovery and make Europe more resilient to energy security threats, write a group of MEPs.

This opinion article is signed by members of the Inter-parliamentary United for Ukraine Network. Signatories are listed at the bottom.

The tide of war turns as Ukraine is regaining its territories, but Russian occupation is still bringing devastating human and economic toll. As the death and destruction continue, the immediate priorities are military aid, humanitarian relief and macro-financial assistance.

Yet, we owe it to the Ukrainian people to already start preparing the plan to help them recover for a better, sustainable European future.

With Ukraine successfully repelling Russian aggression and gaining EU candidacy status, the future of Ukraine and Europe is now being redefined.

Europe needs a bold vision for a new Green Marshall Plan for Ukraine. Such a plan will include major investments, not only for rebuilding the basic critical infrastructure, such as roads, bridges, schools and hospitals but also for the modernisation of the Ukrainian economy, to help prepare the country to join the European Union in the coming years.

An ambitious plan to re-tool Ukraine’s industry and economy is now necessary. This is needed not only for Ukraine but also for the EU itself.

There is an urge to design it in the spirit of post-World War II reconstruction in order to meet the scale of damage, while the challenge is also to use this opportunity to make Europe more durable and resilient in the face of energy security threats and the climate crisis. This is why we need a Green Marshall Plan for Ukraine.

Renewal of industry as driver of the economy

The industry is the heart of the economy and successful reconstruction is impossible without re-establishing Ukraine’s industrial powers. Ukraine’s steel sector, which was severely affected by the barbaric siege and destruction of Mariupol, will need to be rebuilt from scratch.

New technologies today allow the production of steel with electricity and green hydrogen instead of coal. Green Ukrainian steel will be used all over Europe to build wind turbines, solar farms, new infrastructure and transport corridors, high-speed trains, public transportation and new military and defence equipment to secure our borders.

Along with its rich iron ore reserves, Ukraine has the largest potential for solar and wind energy in Europe. With the right technology and investments, Ukraine will rapidly expand its renewable energy sector and become a major producer and supplier of green energy to European energy markets.

Ukrainian industry will also be engaged in production chains for heat pumps, renewable energy equipment, batteries, electric cars, smart energy-saving appliances and other solutions we need to cut our dependence on imported fossil fuels and reach net zero emission in the next few decades.

Russian aggression in Ukraine and Putin’s energy blackmail have added to the urgency to completely decarbonise Europe and call upon us to accelerate this effort at a war-time pace.

Today direct links between the European Green Deal and geopolitics are undeniable: the energy transition has become a security and defence issue for the EU.

For Europe, cutting fossil fuel imports also has a strong moral background – we must stop funding Putin’s war machine or any other petro-dictatorship.

Shifting from Russian oil and gas to oil and gas from other countries with questionable human rights records will only shift geopolitical power from one abuser to another.

In our vision of the future, the Green Marshall Plan will allow Europe to switch from Russian oil and gas imports to more and more local production from renewables and to clean, green electricity, transmitted from Ukraine.

A 750 billion-euro Marshall Plan for Ukraine will lay the foundations for rapid and resilient economic development in Ukraine and the rest of Europe in the 21st century.

To be successful it needs to support structural change and integration towards the EU and address challenges in the six key strategic areas.

1. Emergency aid, reconstruction of critical infrastructure and damaged cities. From its early stages reconstruction of Ukraine should be based on European standards and aligned with the accession process: new infrastructure must be resilient and address climate change adaptation needs, while new buildings must be designed with high energy efficiency and reduce demand for energy.

3. Re-tooling Ukraine’s industry to make it a driver for decarbonised economic development. Production of steel, fertilizers and other goods should be re-established on a new technological basis and will require massive investments.

4. Boosting energy transition across the whole region by integrating Ukraine in European energy markets and green technology production chains. The historic Energy Union project, aimed to create a single energy market across the whole continent, is now within reach. We need to expand the electricity trade with Ukraine and make it a powerhouse of renewable energy for the whole of the EU.

5. Phasing out fossil fuel imports to Europe and replacing them with green energy from Ukraine. We must transfer renewable energy technologies to Ukraine and localise equipment manufacturing there – production of wind turbines, solar panels, biogas plants and electrolysers. This will simultaneously boost Ukraine’s economy and allow it to share vast renewable energy potential with other European countries in the form of green energy exports.

6. Creating a massive wave of employment with thousands of “green” jobs for both Ukraine and EU member states. For example, energy-efficient housing construction and renovation, expanding transport infrastructure, new industries and manufacturing will require massive labour mobilisation. For this to happen we need close cooperation to develop and employ a skilled workforce.

Today the courage of Ukrainians is protecting Europe and the world, and tomorrow their thrift, backed by European values and resources, will rebuild the country to a better level.

To deliver on the key goal of the European Green Deal and make Europe the first carbon-neutral continent, we need to implement Green Marshall Plan for Ukraine during this decade.

Signed by members of the United for Ukraine Network:

1. Andrius KUBILIUS, Member of the European Parliament, Coordinator of the United for Ukraine Network

5. Knut ABRAHAM, Member of Parliament, Bundestag of the Federal Republic of Germany

6. Robin WAGENER, Member of Parliament, Bundestag of the Federal Republic of Germany

7. Alexander MEREZHKO, Member of the Parliament, Verkhovna Rada of the Republic of Ukraine

12. Georges DALLEMAGNE, Member of Parliament, Chamber of Representatives of Belgium

15. Michał KAMIŃSKI, The Deputy Marshal of the Senat of the Republic of Poland

16. Francisco ALMEIDA LEITE, Secretary of State for Foreign Affairs and Cooperation of Portugal

20. André GATTOLIN, Member of Parliament, Senate of the Republic of France

21. Lisa YASKO, Member of Parliament, Verkhovna Rada of the Republic of Ukraine

22. Alexandru MURARU, Member of the Chamber of Deputies, Parliament of Romania

23. Eerik KROSS, Memeber of Parliament, Riigikogu of the Republic of Estonia

24. Marius MATIJOŠAITIS, Member of the Parliament, Seimas of the Republic of Lithuania

30. Serhii KALCHENKO, Member of Parliament, Verkhovna Rada of the Republic of Ukraine

33. Domagoj HAJDUKOVIĆ, Member of the Parliament, Parliament of the Republic of Croatia

42. Diogo LEÃO, Member of Parliament, Assembly of the Republic of Portugal

44. Wladyslaw Teofil BARTOSZEWSKI, Member of Parliament, Sejm of the Republic of Poland

52. Martin EXNER, Member of Parliament, Chamber of Deputies of the Czech Republic

55. Lesia VASYLENKO, Member of Parliament, Verkhovna Rada of the Republic of Ukraine

56. Giedrius SURPLYS, Member of Parliament, Seimas of the Republic of Lithuania