A united world order is needed to tackle the climate crisis 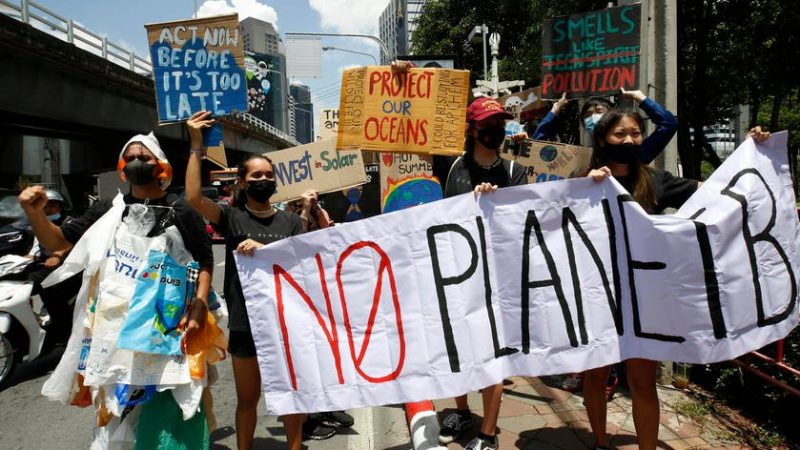 Activists on a climate change strike in Bangkok, Thailand, 22 April 2022. The movement was held on Earth Day to protest and call on the Ministry of Natural Resources to change in the politics for handle the climate crisis in Thailand for to safeguard the planet and the earth's environment [Narong Sangnak / EPA-EFE]

2022 has seen deepening divisions between countries, driven in part by the war in Ukraine and skyrocketing fuel and food prices. As policymakers look to tackle the climate crisis, they should focus on global, harmonised measures rather than bilateral decisions that could deepen divides, writes Carne Ross.

The war in Ukraine is fracturing the rules-based world order. Global institutions like the UN are increasingly stymied. Divisions are deepening between the vigorous opponents of the Russian invasion in the West and those, like China and India, who are more permissive. Rocketing fuel and food prices are triggering a humanitarian crisis, particularly in the Global South.

Whether on trade or disarmament, the prospects for international cooperation get ever bleaker.  Even nuclear weapons have re-emerged as a dangerous – and divisive – international concern.

But it is another threat to the survival of civilisation that may, paradoxically, offer a path to global cooperation and greater stability: all countries face the common danger of climate heating.

Until now, this existential crisis has primarily been discussed in the UN Framework Convention on Climate Change. But as countries start to implement the targets they have promised, a broad international architecture of cooperation, embracing trade, development and technology will be needed: if you like, a climate world order, a system of cooperative structures, rules and alliances that will, if designed correctly, deepen ties between countries and blocs, and reweave the tattered fabric of international collaboration.

Countries across the world are beginning to grasp the complex problems of shifting their energy systems to renewables, and decarbonising industries, like steel and cement. All countries are facing these very difficult challenges at the same time.

In the EU and China, carbon markets are a central tool to promote decarbonisation and the idea of a ‘climate club’ of countries with common carbon prices and rules is coming to the fore.

International efforts to agree on common ‘green’ standards, in sectors like steelmaking, are gaining traction. Governments are thinking about what incentives – subsidies – and disincentives – rules – to enact to accelerate the decarbonisation of their economies.

There is a risk that what will emerge from this regional and national action will be a chaotic hodgepodge of competing rules, regulations, subsidies and carbon pricing mechanisms. This will trigger endless trade disputes that could in turn transmute into further geopolitical tensions.

The EU is preparing the Carbon Border Adjustment Mechanism to protect their carbon-priced products from ‘carbon leakage’ whereby production moves from the region with carbon prices to a region without, where it’s cheaper to produce.

The mechanism has a positive purpose, but in the US and China, some see it as a protectionist tariff. New trade wars will only add fuel to the geopolitical fire.

Instead, we need a new global and harmonised system of regulations, subsidies and carbon prices so that decarbonisation is maximised and disputes are minimised. These should also help tackle the costs of climate heating’s impact, felt particularly in the Global South.

The system would need allowances, not penalisations for developing countries that may need longer to transition to a carbon-free economy. It will also need to find a way to harmonise carbon prices with non-price mechanisms, like green standards, so that the outcome – decarbonised products – is the same, which is tricky but possible.

And, like the Paris Agreement, it will need a ‘ratchet’ whereby carbon standards and ambition are continually improved so that the world meets the target of net zero by 2050.

These elements would comprise a shared vision of common rules, regulations and prices, a club which every country, particularly China and other big emitters, should want to join.

A crucial underpinning would be North/South ‘solidarity’ in the form of the trillions in private and public sector finance needed to pay for decarbonisation and compensate for climate heating’s harms.

Other policies to address the climate crisis can, in different ways, contribute to stability.  A more rapid transition to renewables will promote energy independence, reducing the poisonous and conflict-rife influence of petro-politics, whether emanating from Russia or the Middle East, as well as stabilising energy prices.

Climate policy-driven transformations to a more localised soil- and carbon-preserving agricultural system will lower the risk of the global food price crisis that the Ukraine war has triggered, as the world becomes less dependent on a few massive intensive producers.  A more robust and resilient world economic system will thus be born.

Bringing a vision of harmonised rules and solidarity between North and South to life will take diplomatic labour, resources and hard, detailed work in the complicated ‘hard to abate’ sectors like steel and cement.

It will need to be multi-dimensional, to embrace sectoral policies, like green standards, as well as national and regional climate frameworks like carbon markets.

But this is a positive vision that all countries can unite around, to fight a shared planetary threat from climate change. This is a 21st century solution to an urgent existential problem. What a contrast it could be to the 20th century world of geopolitical rivalry and conflict that we see repeated today in Ukraine, Syria and beyond.