By Eric Njuguna and Maya Ozbayoglu 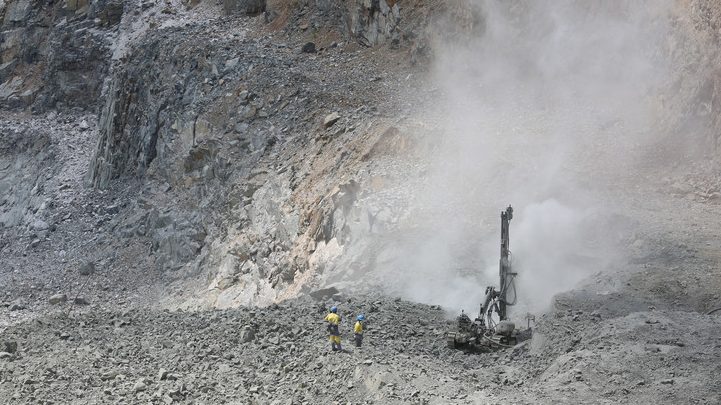 Europe's drive to reach a green and sustainable economy requires a huge amount of minerals, like lithium and cobalt, but there are concerns that the mining processes for these are leading to environmental damage and human rights abuses in Africa [Aaron Ufumeli / EPA-EFE]

To fix the climate crisis, Europe needs to look beyond its borders and recognise the neocolonialist, historical and oppressive systems that continue to contribute to environmental damage and human rights abuses, write Maya Ozbayoglu and Eric Njuguna.

The climate crisis does not exist in a vacuum. It cannot be solely seen through a physical and environmental lens as it has been both created by a particular group of people, and has been impacting certain communities disproportionately.

It is a crisis of injustice and inequality; a by-product of capitalism, racism and colonialism. No summit between African nations and the European Union will be successful unless it addresses the abhorrent past and present-day issues that are being perpetuated by an imperial order of global politics and economics.

“Leaders are expected to discuss how both continents can build greater prosperity. The aim is to launch an ambitious Africa-Europe Investment Package, taking into account global challenges such as climate change and the current health crisis.”

“They should also be talking about tools and solutions to promote stability and security through a renewed peace and security architecture” – this narrative is being presented to us by the website of the European Council, as “official” information about the event.

However, what the EU is not informing about is its historical contribution to the current state of our world, considering both climatic and socio-economic impacts, as well as its proposed solutions for tackling global challenges.

We get bombarded with slogans such as “Europe is leading the way in the green revolution”, “Europe will become the world’s first climate neutral continent by 2050” and “it is possible to grow our economy and tackle the ecological crisis (which is often referred to as green growth)”.

These empty promises get packaged in an attractive way, and most people from the upper-middle class in the Global North buy this narrative, digging themselves even deeper into the Euro-centric bubble.

As climate justice advocates, as global citizens we have to ask ourselves: is our green revolution just another form of perpetuating the current system which makes the rich richer, and the poor even poorer or is it truly based on a people and planet-centered action plan?

According to research published in The Lancet Planetary Health, Global North countries are responsible for 92% of excess global carbon emissions, yet are the least affected ones by the consequences.

This is climate injustice, and it is compounded upon other injustices that were created through practices such as neocolonialism, ie the practice of using economic imperialism, globalisation, cultural imperialism and conditional aid to influence a developing country instead of the previous colonial methods of direct military control or indirect political control.

For instance, it is clear that in order to tackle the climate crisis we need to divest from fossil fuels and invest in clean renewable energy. This shift however is leading to an increase in the mining of minerals, like cobalt, which multinational companies have been mining using cheap labour from labourers in the Global South.

The Democratic Republic of Congo (DRC) can serve as a perfect example as it produces “more than 70% of the world’s cobalt,” along with other semi-precious gems, crystals.

According to the Wilson centre, of the 255,000 Congolese mining for cobalt, 40,000 are children, some as young as six years old. Much of the work is informal small-scale mining in which labourers earn less than $2 per day while using their own tools, primarily their hands.

Cobalt is an essential mineral used for batteries in electric cars, computers, and cell phones. Demand for cobalt is increasing as more electric cars are sold, particularly in Europe, in the name of “green transitions”.

That is why in the process of transforming its economy to a more people and planet friendly one, the EU has to scale down its consumption and production levels and adapt alternative economic systems, such as degrowth.

Another example of the unjust system that the EU is fueling: carbon taxes on the highest carbon emitters. The capitalist system in which such companies are embedded is meant to benefit the few.

When carbon taxes are introduced, it leads to an increase in the prices of commodities. This, in turn, means that in the end the consumers – mostly those most marginalised from low-income communities –  are the ones who cannot afford everyday necessities. Polluters should pay for the harm they do, and prioritise people, not profit.

Neo-colonialist solutions also include carbon offset projects, some of which are in the Global South and involve planting trees. Most of these projects have led to land-grabbing of Indigenous Peoples’ lands and the plantation of mono-cultures which have been disastrous to the local biodiversity.

In west Kenya, for instance, over a thousand homes were torched by the government’s Kenya Forest Service (KFS) to forcibly evict the 15,000 strong Sengwer indigenous people from their ancestral homes in the Embobut forest and the Cherangany Hills.

Additionally, many European leaders like HM Prince William and David Attenborough have blamed the climate crisis on population growth in the Global South.

First of all, the world has enough resources for everyone, and in reality, population growth in the Global South hasn’t led to increased pollution.

In fact, according to Oxfam International, the richest 10% accounted for over half (52%) of the emissions added to the atmosphere between 1990 and 2015.

During this time, they blew one-third of our remaining global 1.5°C carbon budget, compared to just 4% by the poorest half of the population. The problem is not population growth in African nations, it’s a racist and neocolonial system perpetuated by the states from the Global North, Europe included.

Last but not least, climate finance at its current state needs to recognise the historical role Global North countries have in causing the climate crisis. Most of this finance – crucial for Global South countries to adapt to an ever-changing climate and develop their economies – is being given in the form of loans, which ends up creating more debt.

Most affected countries ultimately drown in debt because of a crisis they haven’t caused in the first place. If the EU truly wants to support African nations in their fight against the climate crisis, it should pay climate reparations to MAPA (Most Affected Peoples and Areas).

It is clear to us that in order to solve the climate crisis we need to approach it by recognising neo-colonialism, historical contributions and the oppressive system perpetuated by countries benefiting from it.

We need real, planet- and people-centered climate, economic and social solutions and an immediate halt to destructive fossil fuel projects, such as the East African Crude Oil Pipeline currently being built through refuges of biodiversity in Uganda and Tanzania by the French oil giant Total.

Neither Africa nor Europe will be able to build greater prosperity if it continues to prioritise short-term profit and power over people’s well being. We have no time for another empty summit.