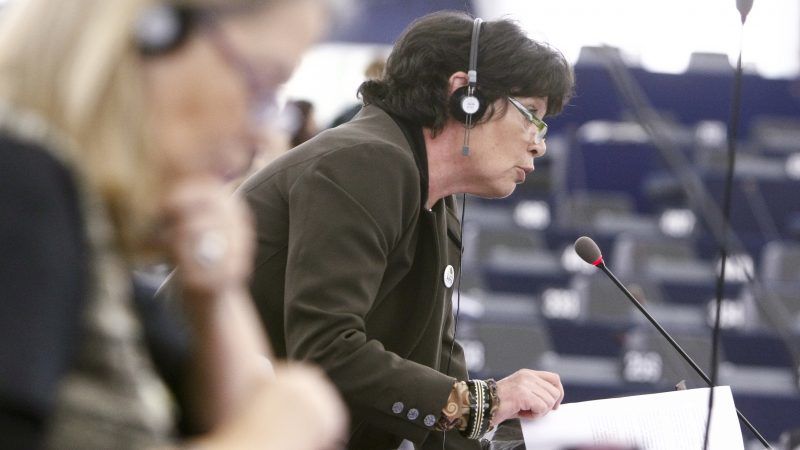 MEP Michele Rivasi will have a task on her hands convincing member states to come closer to the Parliament's position on governance. [European Parliament]

The governance of the low-carbon transition would constitute a litmus test to EU’s international credibility and evolving energy policymaking and enforceability framework, writes Yana Popkostova.

Yana Popkostova is a director at the European Centre for Energy and Geopolitical Analysis and a young policy leaders fellow at the EUI, running a project on EU Energy Governance. She serves as an expert reviewer to the IPCC’s special report on global warming of 1.5°C.

Steer governance correctly and the spell of political nihilism vis-a-vis the popular aspirations can be debunked. Engage in stubbornness over ambition and flexibility, and beware of the judgement of current electorate and history.

Often, as it happens in politics, conduct belies little resemblance to fanfare rhetoric. Strides achieved in verbosity, followed by meagre implementation endanger public trust and increase the avalanche of demagogy spreading like miasma across the public space.

No other an issue enjoys higher public support across the EU than the need to combat climate change – the latest Eurobarometer survey is striking – nine out of 10 Europeans believe that climate change is a serious problem and their governments should set targets to increase renewable energy use and improve energy efficiency.

Their leaders listen and use international fora to restate their commitment to the low-carbon transition – as long as it is before large audiences and garners flattering applause that is. Bipolarity appears when the Montblanc is put in the hand and the rhetoric is mandated into law.

Then, miraculously, a syndrome of detachment overwhelms the beholder, and the populace’s desires, let alone the future of the planet lose their importance. Shall this be the destiny of the Governance file, remains to be seen, but European leaders have a unique opportunity to set the trajectory right and exploit green growth potentials.

The time is ripe the Council exhibited vision, and Bulgaria proved detractors wrong by steering ambition upward and injecting a ‘united we stand strong’ vibe in the trilogue negotiations.

The European Parliament’s vote (17 January) confirms a strong rapporteurship and unparalleled acumen in shepherding a firm mandate for negotiations (466/139). Carbon neutrality by mid-century feeds directly into EU’s Paris pledge and is boosted by the upgraded RES and EE levels (35%).

But the vote is no game changer. The Council position does not bode well with the EP’s leadership and the negotiations will stir the schisms on RES trajectory linearity, quantitative recommendations and extent of flexibility.

Behind closed doors, amidst the intimacy of frank exchanges texts can and do change, and only when [if] the Council moves closer to EP’s position can one engage in euphoric predictions.

The stakes are high: without ensuring a solid governance framework, neither the Energy Union’s five dimensions, nor the 2030 climate and energy targets will be attained. The impact on EU’s credibility as a transnational actor should not be neglected either.

Nevertheless, the currently proposed framework allows member states to deliver on voluntary basis without external arbitrage. Whereas a MS is falling behind, the Commission is impotent to force action.

Soft governance underpins the framework making it vulnerable to free-riding and a domino effect of inaction and/or temptation for opportunistic behaviour.

At the backdrop of some liberty at energy price regulation and coal plant subsidies allowed under the electricity market design legislation, such laissez-faire governance approach would compromise the very tenets of the Regulation, imperil investment in EU’s low-carbon
transition and diminish the Union’s global climate leadership.

In a policy environment characterised by a backlash against detached elites and policies, the democratic deficit of the energy governance constitutes a focal challenge not to be undermined.

Moral hazard and the paradigm of compliance

In order to avoid lock-in in an unfeasible process, the upcoming trilogues negotiations [expected to start in earnest next month] should close the gap between rhetoric and conduct. A few issues are of key importance:

• Compliance & Enforcement: Having collectively agreed climate targets which are not binding at MS level constitutes an important deficiency in the system. To rectify the created imbalance, the proposal should grant some enforcement powers to the COM to bolster its ability to forge corrective action in cases of overt or unintended free-riding or inaction. This would ensure policy coherence and investment certainty towards the 2050 targets and achievement of the 2030 milestone;

• Solutions & Conditionality: The clear timeframe to react to COM’s recommendations should be emboldened by a sort of conditionality clause as well as the prescription of a transparent procedure in cases of weak remedial performance. Designating the COM as a gap-filler without providing a mandate to advance solutions methodology could open the process to a second-tier contestation and increase the schism amongst leaders and laggards. Whereas a MS lacks capacity [technical, administrative] or social welfare/other socio-economic stakes explain the gap, the COM has to second experts and/or provide financing to facilitate the transition [for instance via the Coal Regions in Transition Platform] but this should be done as per clear methodology, and not automatically assumed.

• Democratic legitimacy: A clear mechanism for provoking multi-stakeholder debate surrounding the design, impact and implementation of the NECPs would be key to avoid democratic deficit issues. To ensure regional cooperation and wide stakeholder consultation, mechanisms to actually steer it shall be developed. The COM can easily forge the creation of a transparent facilitative dialogue as well as an online platform for regional exchange and citizens’ input. Such a technical level platform can be bolstered by political forums with rotating chairmanship to ensure political uptake and leadership.

Impregnated by associations with corruption and poverty, the vibrant Eastern European country rarely had a chance to broker legislative initiatives, muster engagement and shine with purpose.

Bulgaria has assembled a stellar Presidency team, and chaperoning a strong agreement on the Governance file and striking the right balance between ambition and flexibility will flag negotiations acumen, visionary thinking and leadership grit.

Such would debunk faulty stereotypes, solidify the country’s stance as a mover and shaper of regional cooperation and rejuvenation, and leave a lasting imprint on the legislative history of the Union. It is a fortuitous time for the country to broker difficult debates on the Governance file and usher a Council position in tune with the MEP’s proposals.

The proposed governance framework has the potential to accelerate the low-carbon transition through energy policy coordination and enhanced implementation benchmarking. Nevertheless, important deficiencies might imperil the fulfillment of this potential.

The Bulgarian Presidency of the Council of the EU has a unique opportunity to facilitate the achievement of the transformative potential of the Governance file and leave its mark on the legislative history of the EU and on the future of this planet.

The hope remains that European leaders would live up to their rhetoric and break the spell of inaction.