The German government should support the establishment of an EU-wide framework for green hydrogen to keep electrolysis manufacturing competitive, write Matthias Deutsch and Andreas Graf.

Liquid and gaseous power-to-X (PtX) products, also known as e-fuels or powerfuels, are critical ingredients of the energy transition. They will be needed wherever the direct electrification of the energy system reaches its limits – above all in aviation and in a range of industrial applications, be it as process heat or feedstock, and for long-term storage.

Even though low electricity prices are decisive for competitive electrolysis, conventional wisdom holds that the technical equipment for electrolysis – the electrolyser – is also relatively expensive, contributing considerably to the overall cost of renewable hydrogen.

According to the IEA, the lowest capital expenditures (CAPEX) today start at 500 USD/kWe for alkaline electrolysers (see table below). These figures are drawn from diverse sources, including the German NOW GmbH (National Organisation Hydrogen and Fuel Cell Technology), as well as our own publication on the future cost of electricity-based synthetic fuels.

More recent cost estimates by Bloomberg New Energy Finance (BNEF) are beginning to challenge this conclusion. In a publicly available summary of this analysis, BNEF notes that Chinese manufacturers have been able to manufacture low-CAPEX alkaline electrolysis at 200 USD/kW.

IRENA has also more recently provided CAPEX data for alkaline electrolysers that matches well with the IEA average mentioned above, while also including a diagram with a “best case” renewable hydrogen production cost estimate for today that is based on a low-CAPEX electrolyser with 200 USD/kW – associated with Chinese manufacturers.

So both IRENA and BNEF consistently describe China as the nation whose manufacturers lead the global alkaline electrolyser market CAPEX-wise, even though the Chinese products may not be able to compete entirely in terms of reliability and quality.

This raises the question of how quickly the cost of Western manufacturers’ electrolysers can converge to the Chinese cost level. BNEF’s answer is: by 2030 (see figure below). 115 USD/kW would then represent less than one-third of what the IEA – and many other projections currently in use – deems the minimum CAPEX for 2030. 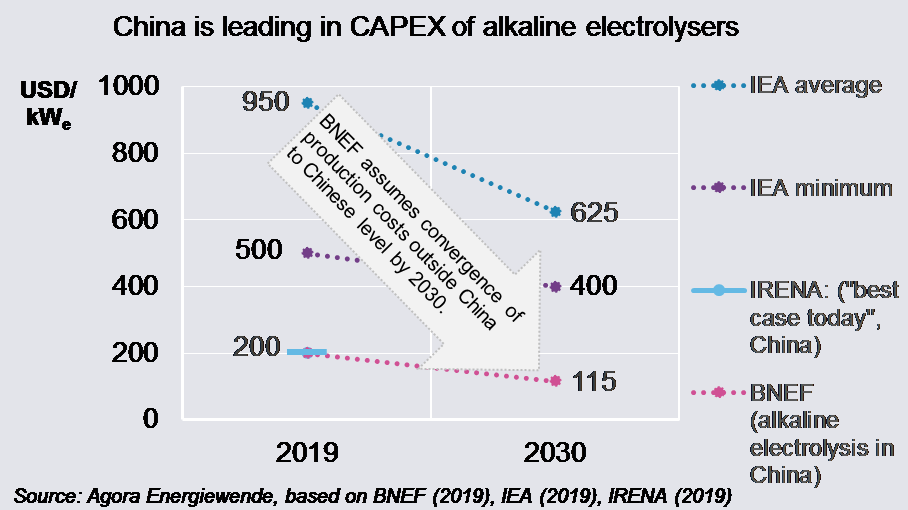 How could such a reduction in CAPEX materialise? According to BNEF, through “a combination of increased scale, automation and moving production to countries with cheaper workers”.

The implication of this reduction would be levelised cost of hydrogen production of 1.3 USD/kg by 2030, which would make renewable, green hydrogen pretty competitive relative to blue hydrogen from natural gas with Carbon Capture and Storage (ranging from about 1.5 to 2.5 USD/kg H2).

Bringing down the cost of green hydrogen through policy support

Today, in the absence of sufficiently high carbon pricing, green hydrogen is not competitive with hydrogen from unabated fossil fuels yet. Without a clear business case, private actors are unlikely to produce green hydrogen in meaningful volumes (beyond the scope of smaller pilot projects).

This is why we have recommended establishing technology-specific policy support for renewable hydrogen in the form of a green hydrogen quota.

This quota would require suppliers of natural gas to provide an increasing share of green hydrogen to the market, either through injection into the natural gas network or through certified offtake in separate hydrogen grids or supply chains.

Such a quota would create a stable demand for green hydrogen and ensure the financing of the technology learning cost of electrolysis.

There is a considerable risk of free-riding, though. Countries’ willingness to pay their share in learning cost is unclear. Some might find it attractive to avoid shouldering the innovation costs associated with early hydrogen deployment by simply waiting for other countries to pay the higher bill.

This disincentive to engage in the provision of early policy support could and should be overcome at the EU level by including an EU-wide innovation support initiative in the legislative “Gas decarbonisation package” currently under discussion.

Such international cooperation on innovation support would be the best way to counter the incentive to free-ride on early green hydrogen development.

We recommend that this innovation support take the form of a gradually rising quota for green hydrogen be implemented EU-wide in the context of the upcoming package.

From an industrial policy perspective, such a quota would help electrolysis suppliers to focus on cost reductions and to increase competitiveness. This should be of interest to, among others, all countries with electrolysis manufacturing, including France, Italy, the United Kingdom, Belgium and Germany.

Clearly, there is more to electrolysis than the very mature alkaline technology with its about 100 years of experience, mainly from the chlor-alkaline process.

The competing Proton-Exchange Membrane (PEM) technology brings advantages not only due to higher feasible hydrogen pressure levels but also because it needs much less space than a comparable alkaline electrolyser system.

Still, PEM is considerably more expensive. And this is even more true for high-temperature SOEC electrolysis. So the good news is that there is sufficient room for competition between electrolysis technologies.

This will also require Europe to look beyond its borders to explore the opportunity of importing green hydrogen from countries with great renewable energy potential and exceptionally low renewable electricity production costs.

The viability of future international long-distance trade in green hydrogen will in turn also heavily depend on reductions in the costs of hydrogen transport technologies – be it in the form of liquefied hydrogen, ammonia or liquid organic hydrogen carriers.

The cost of these technologies is projected to remain relatively high at around 1 to 2 USD/kg by 2030, according to the IEA (2019), affecting the competitiveness of imported green hydrogen relative to blue hydrogen.

In sum, Europe should take on the challenge of looming low-cost competition from Asia for electrolyser manufacturing by giving its own electrolysis suppliers the opportunity to scale, learn, and reduce cost quickly enough to become competitive. We believe that an EU-wide green hydrogen quota provides the best framework to make this happen.

Acknowledgements: The authors would like to thank Matthias Buck, Philipp Hauser, Frank Peter and Christoph Podewils for helpful feedback and comments.