How can the EU ETS facilitate energy transition across the EU? 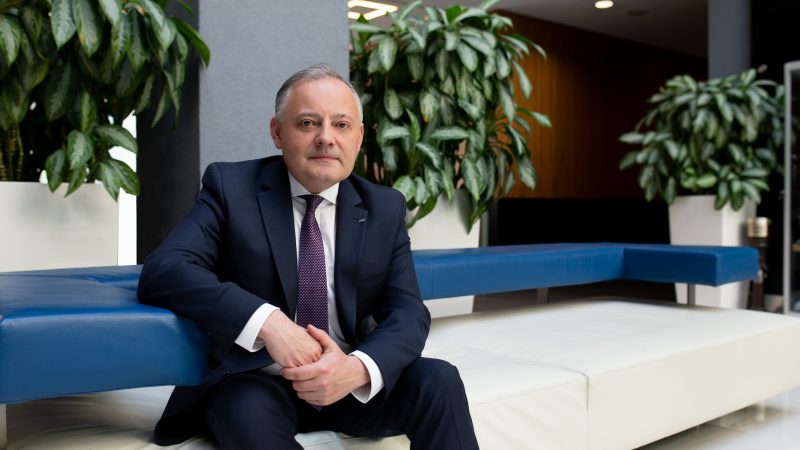 Wojciech Dąbrowski is the President of the Polish Electricity Association (PKEE).

The reform of the Emissions Trading System is a key part of the EU’s ambitious “Fit for 55” Package  paving Europe’s way to climate neutrality by 2050. As the debate on the future design of the EU ETS is heating up in the European Parliament and the Council, the European lawmakers leading the work on this file face a challenging task of speeding up the emissions reduction process, while ensuring sufficient resources and time to implement ambitious climate goals. The EU co-legislators should address price volatility, the allocation key, and the scope and size of the Modernisation Fund.

The EU ETS aims to incentivise polluters to invest into technologies leading to emissions reduction. Such transition is possible with a gradual price increase, achieved through a step-by-step reduction of available allowances. However, the recent price surge undermines this logic. In 2021 the prices of the EU ETS tripled, exceeding €90 per tonne – such costs were expected to be reached only around 2030. Extremely high prices of allowances may prevent companies from speeding up the transition by limiting their capacity to invest in green technologies. Moreover, the situation negatively impacts electricity prices, in particular in the Member States such as Poland, where the structure of energy generation requires the purchase of EUA certificates. However, the prices of CO2 emission allowances fell sharply after the start of Russia’s invasion of Ukraine. This proves the high level of instability of the EU ETS.

An unresolved issue regarding solutions mitigating excessive price variations is the revision of Art. 29a of the EU ETS Directive. The article has never been used so far and the recent price changes demonstrated that it is too vague to be used against price shocks. However, Peter Liese, MEP proposed strengthening the existing mechanism under Art. 29a in order to protect the ETS against price shocks through the release of an additional number of allowances in case of a continuous surge in EUA. The proposal definitely goes in the right direction and empowers the Commission to act more quickly and in a more transparent way.

How to address the issue of surging and volatile EU ETS prices?

In the wake of the Russian invasion of Ukraine, the EU ETS prices plummeted by nearly 30% reaching the level of EUR 60/t. This might suggest that the ETS market is influenced by speculators. There are several drivers behind the recent surge in EUA prices. The volatility on the EU ETS market and sudden surges and drops in prices are reinforced by financial players, who participate in the market not for energy transition enhancement, but purely for their financial gains. The growing role of the financial players in the EU ETS, who have increased their presence on the EU ETS market in 2021, is worrisome. This was confirmed in the Report on the EU Carbon Market prepared by European Securities and Markets Authority (ESMA) on request of the European Commission.

In general, financial institutions play an important role, facilitating transactions on behalf of compliance institutions (like power companies), e.g. purchasing the allowances on their behalf. However, some of them acts as speculators, aiming to maximize income, instead of covering their emissions or hedging against future price increases on the EU ETS market. This issue is flagged not only by the industry but also by MEPs and independent researchers.

Is the ETS managed in a fair and correct way?

Some Member States struggle with allowance deficits. For example, Poland receives 660 million allowances less than the expected country emissions by 2030, which translates into EUR 40 billion that Polish companies will transfer abroad in 2021-2030. Although Poland reduced its emissions by 14% in the last decade and increased its power consumption from renewables by over 300% in the same period, the issue remains. Polish power companies will invest billions in the development of wind and solar energy projects, but the allowance deficits are stalling this process instead of speeding it up.

One of the solutions to tackle the imbalance in the EU ETS is to further increase the Modernisation Fund, which will play a key role in financing energy transition. The Commission’s proposal to increase its total pool of ETS allowances by an additional 2.5% is a move in a right direction, but doesn’t adequately respond to the actual financial needs. To make it fit for purpose, the European lawmakers should propose a further ramp-up of the Fund: different MEPs have already suggested increasing it by 4%, 6% or even 8%.  However, under the MEP Liese’s amendments, we see proposals that seek to slash the number of allowances directed to the Fund and instead to use them to support the Innovation Fund. Although the latter is crucial to foster investments in breakthrough technologies, it must not be done at the expense of the Modernization Fund.

Another issue is the way the additional share of allowances for the Modernisation Fund is calculated. According to the Commission’s proposal, it will be calculated on the basis of allowances available in 2024-2030 period, while the modified Linear Reduction Factor will apply from 2021. In practice, it will reduce the volume of the available allowances for MF beneficiaries, while the objective should be to mitigate negative consequences of the increased LRF.

If properly designed, the EU ETS could be a tool offering unique opportunity for countries facing the challenge of coal phase-out. Topped up with the Commission’s proposal to channel all the auctioning revenues to energy and climate purposes, this will constitute an important source of funding for the countries that need it the most.

The revision of the Market Stability Reserve (MSR) is another way to address the problem of imbalances. The allowances placed in the MSR, instead of being artificially cancelled (as under the current Commission’s proposal), could be transferred to the Modernisation Fund in order to further support decarbonisation. This will ensure more stability and security on the EU ETS market, in particular in the case of a sudden price rally.

The Commission proposed to revise the benchmark system by accelerating the phase-out of free allowances and increasing the heat benchmark value from 1.6 % to 2.5 %. Such change would drastically limit free allocation for heat generation, hindering the coal phase-out in this sector. This is especially relevant for the Member States from the CEE region, where the benchmark increase will have the opposite effect than intended: higher district heat prices might incite users to go off-grid and deploy individual, more polluting heat sources. In general, it will increase the carbon leakage to individual heating solutions. Thus, the benchmark value should remain unchanged.

Need for a stable regulatory environment

The Modernization Fund should remain open to all technologies that reduce emissions. While renewables enable clean and affordable power generation, they cannot be easily implemented in the district heating sector. Investment in cogeneration plants in district heating systems are of key importance for air quality and heat prices. Such investments should remain eligible within the Modernisation Fund to facilitate the necessary coal phase-out.

Key votes on the future shape of the EU ETS and the decarbonisation of heating will take place soon. The Polish energy sector is trying to constructively contribute to the discussion on the reform of the ETS. It is for this reason that we propose the three solutions mentioned above. Firstly – limiting access to the EU ETS market for financial institutions in order to limit speculative behaviour on the ETS market, which weakens this market and deforms the assumptions and the underlying idea of ​​the EU ETS. Secondly – the reform of the Market Stability Reserve (MSR), by moving away from the total number of allowances in circulation (TNAC) in favour of setting a price threshold from which allowances should be directed to the market). And finally – the reform of the mechanism preventing excessive price increases, i.e. the reform of Art. 29a of the EU ETS Directive to ensure a faster response to the observed price shocks, by departing from price multipliers in favour of introducing (similarly to the proposed changes to MSR) a price threshold from which allowances are released on the EU ETS market. A necessary condition for the efficient functioning of the EU ETS market is also the improvement of market monitoring and supervision. Let us remember that in order to continue the transformation of the energy sector and the decarbonisation process, we need market stabilisation and predictability, also on the EUA market.