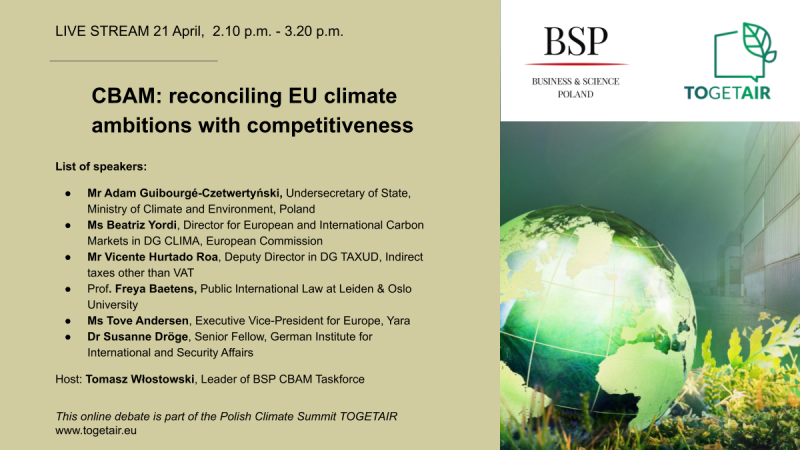 The Polish efforts to reach the climate goals are in the spotlight: TOGETAIR 2021 marks the second edition of the Polish Climate Summit and the first edition of the Polish Multimedia Climate Report. Both offer a unique chance for the EU observer to glimpse into a debate in Poland about the EU Green Deal objectives. The three-day conference, which starts on 21 April, will be packed with debates, ideas, challenges and solutions.

Business & Science Poland will host the debate dedicated to the Carbon Border Adjustment Mechanism. The panellists will discuss key questions related to this new instrument in the EU climate toolkit. Environmental levy on EU borders may not be an entirely new idea. But the link with the EU Green Deal gives it the boost and makes CBAM closer than ever to come into existence. Or doesn’t it?

The EU Green Deal brings probably an unprecedented scale of regulatory demands. The new emission reductions targets will necessitate massive investments. They will also elevate costs for EU producers. The European industry shares the view that decarbonisation is necessary. This remains unchanged by the fact that this effort will bring down the EU share in global emissions only by a few percentage points. But we cannot overlook the resulting conclusion that international efforts are also necessary to make a real difference to the climate.

This is where CBAM comes to play: imposing an equivalent carbon cost on imports may create market incentives for the decarbonization of our trading partners to motivate them to match our own ambitions.

There is also another side of this equation: to the degree that the EU efforts are not matched by our trading partners the competition from the international players will rise. Keeping competitiveness of the EU industry in the decarbonisation efforts is essential not only for the sake of keeping jobs and a prosperous European economy. The old economic truth “bad money drives out good” serves as a warning in the climate policy as well: if the low-emitting EU producers are not able to compete they will lose market share to more emitting competitors, both in the EU and on international markets. This will provoke rather than prevent the global increase of GHG emissions. The EU funded study by the Copenhagen University notes that EU decarbonisation without comparable efforts of the rest of the world will result in an EU trade deficit while currently, the EU has a surplus. Even more importantly, a reduction by 1 ton of GHG in the EU will increase GHG emissions of non-EU trading partners by 0.6 ton.

Designing CBAM entails many technical questions like how to select sectors covered by CBAM, what legal form should it have, which type of emissions should be covered, how to assess emissions of imported products – the list is much longer. But one of the key issues – economic, legal and political – will be the relation between CBAM and existing anti-carbon leakage instruments, that is free allowances under ETS and compensation for the increased cost of electricity covered by ETS – precisely because of the issue of competitiveness.

For this is where CBAM appears to be lacking: carbon leakage occurs not only when the domestic market is caught by imports, but when low-emitting production is replaced by high-emitting competition. Loss of export sales for the EU industry also constitutes carbon leakage. Given that rebating ETS costs on exports may easily amount to export subsidies under the WTO rules, the Commission has not so far provided a solution to the export competitiveness puzzle.

Moreover, to meet the EU’s increased climate ambitions, the industry needs unprecedented investment in innovation. This requires a stable and predictable business and regulatory environment. The withdrawal of free ETS allowances and removal of indirect ETS cost compensation would take place shortly after the start of ETS Phase 4 when enterprises planned their activities and carried out investments based on a law adopted years ago. The change of regulations after these investments have been made calls into question their predictability and profitability. This indirectly may undermine the ability to finance decarbonisation processes. Moreover, the withdrawal of free ETS allowances might de facto penalize sectors and enterprises that have invested in low-carbon technologies and are among the leaders in this respect. Their investments may no longer be profitable once the obligation to purchase all allowances is restored.

CBAM has not been tested in any jurisdiction and as such cannot be considered a 100% certain alternative to existing carbon leakage instruments. But CBAM and existing instruments can be treated as complementary because their objectives are different: the purpose of CBAM should be to incentivize the EU’s trading partners to lower emissions, while the goal of free allocations is to protect the European industry from carbon leakage, especially on export markets. The matter of co-existence of both elements in a WTO compatible manner requires a thorough discussion rather than hasty statements.

In the context of the EU climate agenda, the concept of CBAM seems “too big to fail” but without a fair answer to the questions posed above it may find itself in dire straits.

Polish Climate Summit and the first edition of the Polish Multimedia Climate Report TOGETAIR are taking place between 21-23 April 2021. Learn about the program, meet the panellists and follow the discussions via: