Deployment of renewable gases will bring the local job opportunities the new Commission is striving for in the European Green Deal, write Wouter Terlouw and Thibaud Lemercier.

Wouter Terlouw and Thibaud Lemercier are managing consultants at Navigant, a Guidehouse company. Navigant supports the Gas for Climate consortium on their vision on the role of gas infrastructure in a decarbonised energy system.

The European Green Deal is about cutting emissions, yet also about creating jobs and boosting innovation, Commission President Von der Leyen stressed in her press statement and presentation in the European Parliament on 11 December.

Becoming the world’s first climate-neutral continent requires us to start implementing low-carbon technologies now. Renewable gases are essential to achieving a climate-neutral EU energy system by 2050 and in addition, can bring those local employment opportunities the Commission is looking for.

Today, the EU biogas sector represents 71,000 jobs in Europe that are difficult to outsource.

And this is only the beginning. In an analysis  for the Gas for Climate consortium, Navigant, a Guidehouse company, shows that scaling up renewable gases in the EU can create 1.7 million to 2.4 million jobs by 2050, of which 600,000 to 850,000 would be direct jobs. 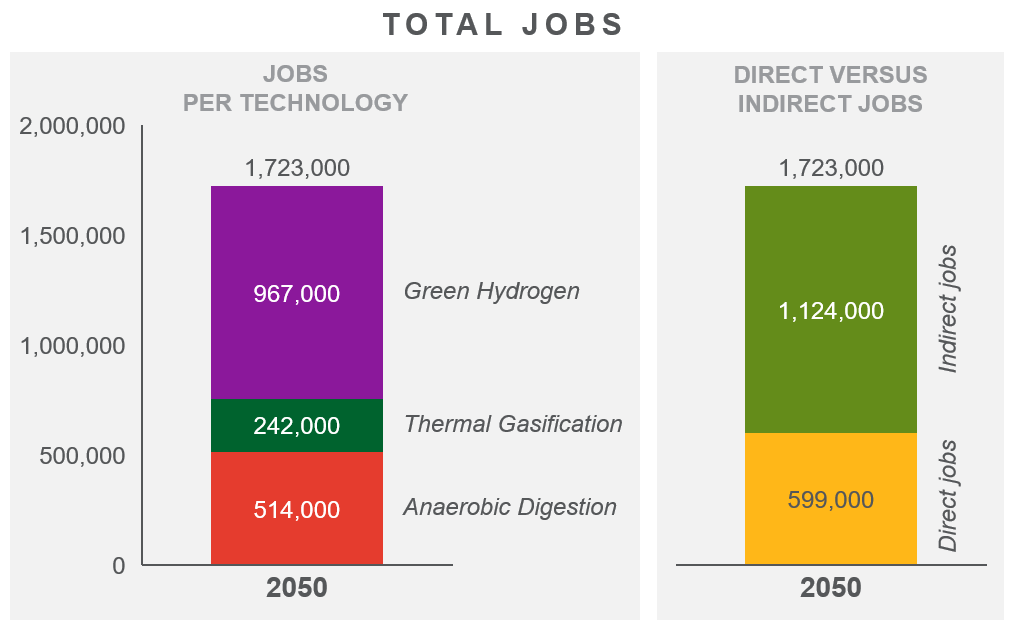 High-skilled technical jobs are expected to emerge in sectors related to manufacturing, installation, and the operation of biomethane and green hydrogen plants, as well as in the renewable electricity generation sector to produce green hydrogen.

Most of these jobs are stable European jobs that cannot be outsourced or relocated.

The report “Job creation by scaling up renewable gas in Europe” follows the “Gas for Climate” study published in March. This study showed that fully decarbonising Europe at lowest costs requires 2,900 TWh of biomethane and green hydrogen. The study also showed that using this gas in existing gas infrastructure could lead to over €200 billion in annual societal cost savings compared to achieving climate neutrality without a role for gas.

The climate-neutral economy should be also one that works for the people, which starts with strengthening the backbone of our economy: small and medium-sized enterprises (SMEs) according to Von der Leyen.

Renewable gas production sites can bring the opportunities for energy, industry and agricultural SMEs and as such will foster societal support for deep decarbonisation.