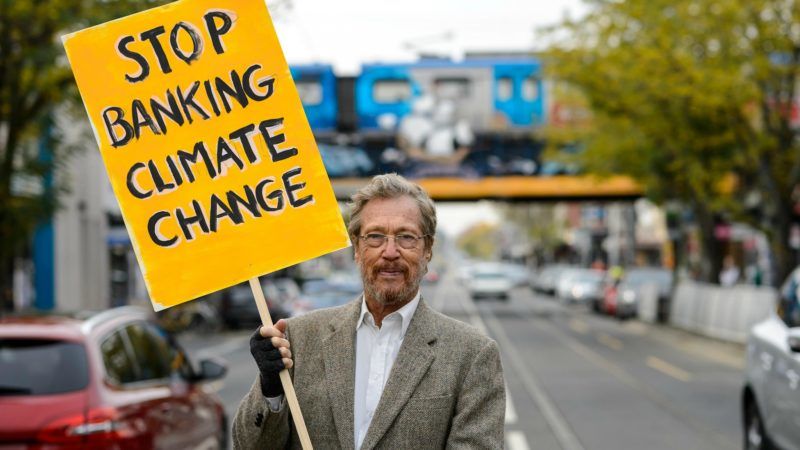 The EU Budget’s multi-annual financial framework should be revised to exclude support for unsustainable investments and the EU’s public banks should lead the way, the report said. [Takver / Flickr]

The European Commission’s High Level Expert Group on Sustainable Finance delivered its interim report today (13 July). Ingrid Holmes, one of the members of the group, explains how the financial system can help address long-term challenges such as climate change.

International agreements on climate change have come and gone … as indeed have so many of the politicians who helped to negotiate them. Now, something that might stand the test of time looks a distinct possibility, not least because it hasn’t been developed by our elected representatives. It is the often-maligned financial community – working with a collection of influential think-tanks and NGOs – that look as if they will be able to take the credit.

The European Commission has just announced the early findings of the High Level Expert Group on Sustainable Finance. You may not have heard of it, but it has real clout. I am a proud to be a member of it and I think we have done something special. The far-reaching set of proposals in our interim report published today (July 13) don’t just address the challenge of climate change, but look beyond at opportunities to deliver an inclusive and sustainable economy using finance as a tool to improve the prospects of our planet.

It is the result of an intensive and at times passionate six-month quest to establish how the financial system needs to change to make for a sustainable world – and how it can be made fit for purpose. Meeting every couple of months in the Berlaymont building – that glass and steel fortress at the very heart of European Government – we finally came to some firm conclusions. Among them:

This all sits within a broader set of recommendations looking at how changes to the governance and operations of the different members of the financial ecosystem need to change to ensure citizens interests are placed at the heart of everything they do. And how financial policy – prudential regulation and accounting rules introduced in the wake of the financial crisis but now widely held to be stymying investment into a sustainable economy – can be carefully adjusted to connect with investments that can help build a vibrant, inclusive and sustainable European economy that works for everyone.

The group behind this blueprint for the future deserves to be taken seriously as it is comprised of experts in the sustainable finance world. As practitioners and thought leaders they are drawn from very different backgrounds – including pension funds, insurers, public and private banks, stock exchanges as well NGOs, think-tanks and investor associations. All are united by a belief that radical and far-reaching reforms are need in the financial world to avert and impending social and environmental catastrophe.

It is the fact the work is being developed and driven by individuals of this calibre – with real clout in their respective fields- that gives me hope that the final recommendations – expected at the end of December 2017 –  will be both ambitious and deliverable. The investors who are involved with the group control assets worth trillions of dollars. Unsurprisingly, President Juncker and two Vice-Presidents (Dombrovskis and Katainen) are paying close attention to the work and are keen to move forward to implement the group’s final proposals in 2018.

In a post-Trump and post-Brexit world where so many politicians seem to have lost sight of what is in the national interest, it is more important than ever that others fill the vacuum that they have vacated. The urgent needs of our planet are not going to disappear just because people like Trump don’t recognise them.

The interim report that my group has just produced is a determinedly realistic piece of work: it isn’t just about shifting investment towards sustainable businesses which will meet Europe’s climate change goals, but doing so in ways that will also address the very pressing social challenges that remain in the aftermath of the financial crisis, including high unemployment (especially among the young); rising income inequality; concerns about the sufficiency of retirement incomes; and lack of access to opportunity.

If we didn’t address these social issues at the same time as trying to resolve our environmental challenges, we knew only too well that we would limit our chances of delivering a set of recommendations that the politicians would feel able to champion. Happily, the more we became immersed in our work, the more clear it became that concern for the environment is not incompatible with concern for the society and the economy as a whole. On the contrary, they complement each other.

Pension fund managers, in particular, have to think long term: what is the point of them investing in a company for a 20 year old client now that is involved in activities that will impact on his quality of life when he reaches retirement age?

The European Commission is open and listening and expectations are high that the recommendations made by the group – of which the interim report released on 13 July are only a trailer – will be adopted as a means of fundamentally reshaping the financial system as a tool for good.