The EU taxonomy is also about tackling chemical pollution

By Charlotte Wagner and Timothy Suljada 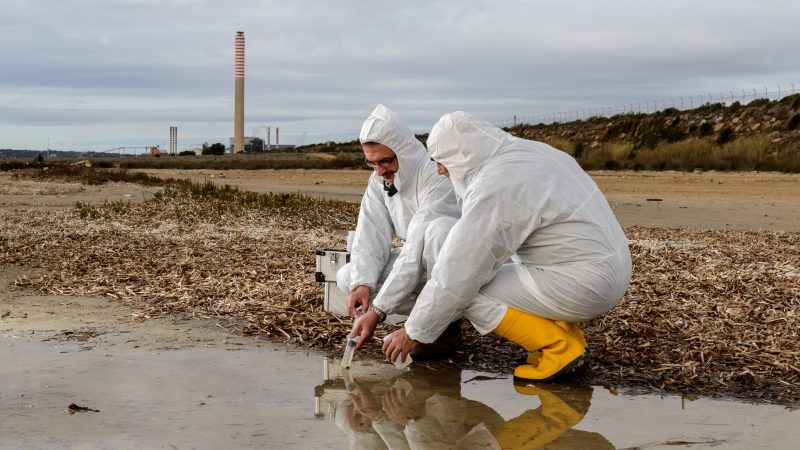 The Taxonomy criteria for pollution prevention and control currently considered by the European Commission rely on existing regulation rather than keeping in step with the ambition of the Green Deal, write Timothy Suljada and Charlotte Wagner. [Patrizio Martorana / Shutterstock]

The EU’s green finance taxonomy is about more than climate finance, it’s also an opportunity to improve our health and well-being by phasing out polluting chemicals, write Timothy Suljada and Charlotte Wagner.

Timothy Suljada is head of the climate, energy and society unit at the Stockholm Environment Institute (SEI). Charlotte Wagner is a scientist at SEI.

1 in 8 deaths in the European Union can be attributed to environmental pollution, including air and noise pollution, climate change associated events and chemical pollution. The European Environment Agency estimates that 62% of chemicals (by volume) consumed in Europe in 2016 were hazardous to health. The taxonomy criteria for pollution and circular economy considered by the EU Commission right now offer an opportunity to address serious threats to people’s health and to make the EU a role model globally. However, the opportunity may be lost if these criteria are not strengthened.

The Commission’s formal proposal is expected in the coming months, and the stakes are high: global chemical sales are expected to double over the next decade, and already, 84% of Europeans are concerned about the impact chemicals in consumer products have on their health. However, our analysis of the criteria currently considered by the Commission reveals that more could be done to meet the ambition set by the European Green Deal.

A founding principle of the European Green Deal is to improve Europe’s health and well-being by transforming Europe’s economic model. Enabling private investments is key to scaling up sustainable economic activities and delivering on the Green Deal. The EU taxonomy for sustainable activities is intended to guide companies and investors towards sustainable products and portfolios by formalising criteria for what is considered sustainable. A key objective of the Taxonomy is to reduce environmental pollution, including greenhouse gas emissions and chemical and plastics pollution.

The ambition is clear in the pollution prevention strategies released under the Green Deal roadmap to date. They promote a shift from chemical-by-chemical regulation to addressing chemical pollution holistically in the Zero pollution action plan and its Chemicals Strategy.

There are also moves to reduce the volume of waste by shifting product value chains from the predominant produce-use-dispose model to innovative circular business models in the Circular economy action plan. The Chemicals Strategy recognises that irrespective of comparatively sophisticated chemical policies in the EU, substitution of harmful chemicals has been slow, and stronger policy and financial support is required to drive the transition to safe and sustainable chemicals.

However, the Taxonomy criteria for pollution prevention and control currently considered by the European Commission rely on existing regulation rather than keeping in step with the ambition of the Green Deal roadmap, as we outline in our submission to the public consultation.

In the case of chemical pollution, the criteria being considered only exclude the use of regulated substances of concern, which means that economic activities using compounds already shown to be hazardous by the science but not yet regulated could be considered sustainable and even “inherently safe”.

However, when considering chemical pollution to soil, water and air, toxicity and exposure potential, in addition, to release magnitude, determine the overall impact on human and ecosystem health. Focusing on release magnitude alone opens the door for regrettable substitutions where manufacturers replace a known hazardous chemical with an unregulated alternative that has not been extensively studied and could be equally or more toxic.

The criteria currently under consideration would not prevent the continued accumulation of plastics and their harmful health and environmental effects. The criteria intended to promote a transition to a circular economy do not prioritise plastic for reuse over recycling, nor consider end-of-life releases from chemicals, chemical products or plastic packaging goods manufacturing. This is in direct conflict with the hierarchy of end-uses favouring lower processing stated by the EU Circular economy action plan.

As a first of its kind, a well-designed Taxonomy could become a guidance model for sustainable investments well beyond its legal jurisdiction in the EU. As a transparency tool, it will require some companies and investors to disclose their share of Taxonomy-aligned activities and protect private investors from greenwashing.

As a financial tool, it will enable companies to become more sustainable, mitigate market fragmentation and help shift investments where they are most needed. The Taxonomy presents an enormous opportunity to meet the ambition of the Green Deal and consider the impact of economic activities on human health and well-being holistically, thereby shaping the economic landscape for decades to come.

The Commission is expected to present its formal proposal on the remaining criteria on the circular economy, pollution, water and biodiversity in early 2022. The coming months will determine whether the Taxonomy is truly up to the task of defining sustainable economic activities and meeting the ambition of the Green Deal.