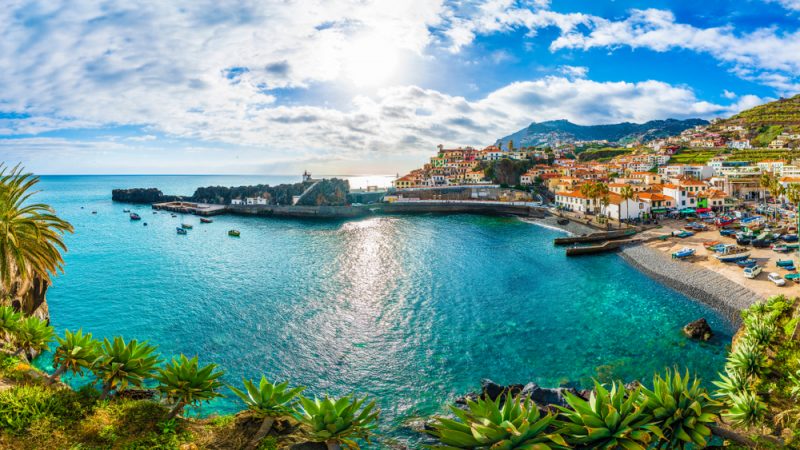 A statement released by the Blue Ocean Foundation said that Madeira would have the largest marine area “in Europe and the entire North Atlantic” with the most comprehensive class of protection, which excludes all extractive activities. [Shutterstock/Balate Dorin]

2022 is an important year as the EU is set to introduce a new nature restoration law. This is a threshold moment for meaningful climate and biodiversity action, writes Odran Corcoran.

Over 55% of global GDP, or €36.7 trillion, is dependent on high-functioning biodiversity and ecosystem services – in other words, a healthy environment. Yet, a fifth of all nations are currently at risk of ecosystem collapse at one level or another.

For our ocean, the cumulative impacts of climate change, pollution, overfishing and the unsustainable exploitation of natural resources from both land and sea have degraded ecosystems at rates unprecedented in human history.

In the Mediterranean Sea, seagrass species, which can store up to twice as much carbon as the world’s temperate and tropical forests, could be extinct by the end of the century.

Meanwhile, populations of Mediterranean land and marine mammals (e.g. Mediterranean Monk Seal, the Great Hammerhead Shark) have fallen by 41% compared to 1950 levels, with over 30 species projected to become extinct by the end of the century.

Native species of molluscs (mussels, sea snails, octopuses, etc.) have already collapsed by almost 90% in the Eastern Mediterranean alone. In the European waters of the North East Atlantic Ocean, up to 41% of sharks and rays are listed as threatened by IUCN.

In the Norwegian Arctic Ocean, the Greater North Sea and the Celtic Sea, there has been a 20% drop in seabird populations over the last 25 years. In regions like the Western Baltic, entire populations of fish such as cod have collapsed. The list goes on.

Poor leadership, government refusal to heed scientific evidence, and prioritisation of short-term profit over healthy seas have brought us here. To bend the curve of nature loss and avert catastrophic climate change, radical shifts are needed.

Due to be published in March, the EU nature restoration law has the potential to be amongst the most important and effective pieces of nature legislation seen in recent years.

With the development of this law, the EU has an extraordinary opportunity to reverse environmental decline and, at least partially, to remedy the long-term impact inaction will have on future generations.

It may feel like we’ve been here before: we’ve already witnessed the EU’s failure to achieve the 2020 objectives to restore 15% of degraded areas in its previous Biodiversity Strategy and to achieve good environmental status of EU seas. So, what’s different about this law? How do we make sure things actually work this time?

The legislation must prioritise both active and passive nature restoration as key elements: Active restoration involves human intervention to help bring back species and ecosystems whose condition has deteriorated, or to bring back those we’ve already lost.

Passive restoration, meanwhile, sets aside areas of nature, such as Natura 2000 sites and other Marine Protected Areas, to safeguard them from pressures, allowing ecosystems to recover via natural processes.

The ecological and socio-economic benefits from both types of restoration projects are irrefutable: a 200-hectare area of restored salt marshes along the German North Sea coast now locks over 5,000 tons of carbon dioxide into the ground every year and is a hotspot for waterfowl.

Marine life in the Medes Islands Marine Reserve off the eastern Spanish coast saw marine life recover so successfully that just eight years after the reserve was established, total annual profit from fishing and tourism in the area was 13 times higher than before.

An effective EU nature restoration law will replicate these stories on a massive scale. To do so, concrete actions and conservation legislation are essential.

The European Commission must ensure that this new law drives restoration at the scale needed to tackle both nature loss and climate change via strong, enforceable targets.

This will ensure we avoid a repeat of previous failures by EU governments to restore nature when action was only voluntary. MEPs and the Council must then support the restoration law and ensure that the level of ambition in the European Commission’s proposal is strengthened where needed, not watered down.

A critical target WWF is advocating for in the law is the successful restoration of at least 15% of the EU marine area by 2030.

Strict protection and passive restoration are critically important for marine ecosystems to recover. It is equally crucial for restored areas to be protected to ensure they are not degraded again afterwards.

This combined approach to restoration and protection will contribute to the EU’s 2030 Biodiversity objective of setting aside at least 30% of marine and coastal areas for protection, with one-third strictly protected.

Scientists are warning of imminent environmental catastrophe due to anthropogenic pressures and climate change. What happens in this decade will determine if we change course.

The EU and its member states must take the lead if we are to actively turn the tide of the crises we face.