Tracking progress to a well-being economy 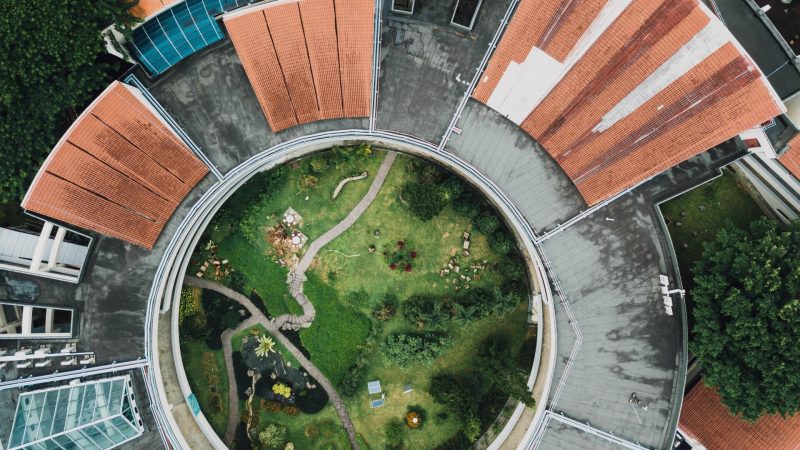 The ZOE Institute for Future-fit Economies has put forward a compass to measure the EU’s economic and social progress beyond GDP growth. [ZOE]

Over time, the European Commission has developed many different sets of metrics to measure progress on economic, social or environmental objectives. The challenge now is to develop a common narrative and a set of indicators that brings all of them together writes Jonathan Barth.

Jonathan Barth is co-founder and Managing Director at the ZOE Institute for Future-fit Economies based in Cologne, Germany.

In the context of climate change and the recovery from the pandemic, there is a need to shape a regenerative, resilient well-being economy. This should aim at improving people’s well-being while especially supporting vulnerable and low-income groups, who are most affected by today’s megatrends reaching across the green transformation, urbanisation, demographic change and digitalisation. A well-being economy achieves this while staying within planetary boundaries. It ensures that essential life-supporting systems such as biodiversity, water provision, and temperature regulation stay intact.

While the vision of a climate-neutral, circular, and just economy is already integrated into the European Green Deal, the recent agreement of the 8th Environmental Action Programme (8th EAP) has the potential to take the EU to the next level. The compromise text agreed in trilogue – and endorsed for now by the EU Parliament’s Environment Committee – enshrines the well-being economy in an EU legislative text for the first time. It is a priority of the 8th EAP, and the door is now open to rethinking how the EU defines and measures progress. What is measured gets done. A new set of economic, environmental, and social indicators will help define the idea of a well-being economy and its relation to resilience and progress “beyond GDP”.

​The debate on “beyond GDP” is not new and has been part of the EU scene since the early 2000s. With the start of the von der Leyen Commission, the issue has been continued under different policy processes. A recent example is the adoption of the Porto Social Summit declaration in May 2021, which applauds the joint proposal by social partners for looking at measuring progress beyond GDP. Another is the opinion report on “Beyond GDP” by the European Economic and Social Committee, which calls for a concise “Beyond GDP” scoreboard.

Redefining progress and delivering on the EU’s social, environmental, and economic objectives will not only need political willingness but also implementation by the 27 EU Member States. Ensuring this requires that progress is tracked in a way that enables policymakers to quickly grasp the EU’s most important trends. It calls for a tool that can identify important tensions that need to be balanced – be it the pros and cons of energy crops, new highways, carbon pricing. It is crucial to have a comprehensive but easy-to-understand compass with a few selected indicators and targets. Numbers and the distance to targets can help communicate the EU’s progress to the public – be it on building digital skills, access to health, education and culture, but also on circularity, economic resilience, mitigating climate change, or fighting soil sealing.

However, at present, there are many different sets of metrics that were developed over time by the EU Commission to serve different purposes. They all have strengths and weaknesses. But the challenge is to come up with a common narrative and a set of indicators that brings all of them together – a summary that is easy to understand, covers political priorities, uses a compelling narrative and visualisation for measuring progress towards sustainable prosperity. ​

To address this challenge, we’ve designed the EU compass towards 2030, inspired by Doughnut Economics. Thanks to a clear visual representation of the EU’s priorities, the compass can enable decision-makers and citizens to quickly grasp the EU’s important trends. The visual presentation of existing indicators can help identify important interconnections between policy objectives that need to be balanced and gaps in goal achievement. 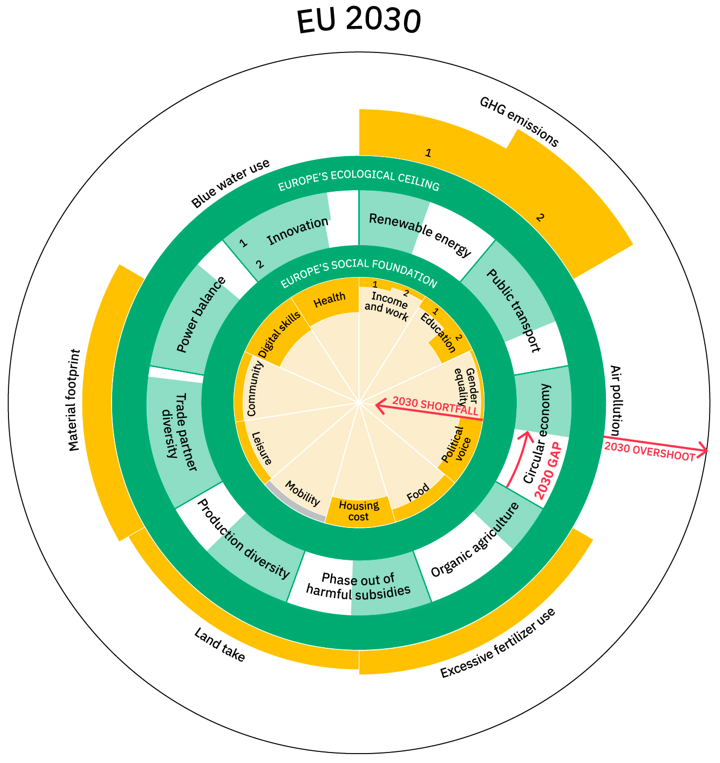 To monitor progress towards the EU’s 2030 goals, the ZOE institute has designed the EU compass towards 2030, inspired by Doughnut Economics. [ZOE Institute for Future-Fit Economies]

In a nutshell, the thick green inner ring of the Doughnut represents Europe’s social foundation, below which lies a critical deprivation of aspects of a good life and a strong society. The outer ring represents Europe’s ecological ceiling, above which is an overshoot of planetary boundaries and a critical risk of planetary degradation, which hinders the possibility to sustain life. The yellow bars indicate the level of shortfall (inner ring) and overshoot (outer ring) compared to the EU’s 2030 targets.

From this visualisation, it appears clearly that the EU is, for instance, overshooting its GHG emissions while not fulfilling its objective on digital skills, education or health. The EU should aim at staying between the green rings, which is a safe and just space for humanity. Policymakers have many possibilities to redesign the economy to make this happen, which are shown between these rings, reaching from promoting the use of renewable energy, public transport to tackling power balances or phasing out harmful subsidies.

Our selection of the 30 indicators is driven by the necessity to represent systemic change, better qualify the resilience economy we need in the future and reinforce the connection of environmental with social objectives such as just transition. Most of the indicators are regularly published by the Commission. Many are already integrated into existing indicator sets (e.g., the Social Scoreboard, the SDGs, the EU Semester, and the Resilience Dashboards). Our proposal brings them together and links them to the priority areas of the EU Green Deal. Where needed, we have made recommendations for the EU targets that are currently missing, such as material footprint.

The adoption of the 8th EAP offers a great prospect for making a well-being economy a political priority. We hope that the EU authorities will seize this opportunity to put well-being, resilience, and planetary boundaries at the centre of policy design and measurement of sustainable prosperity.