Turów on the path of change 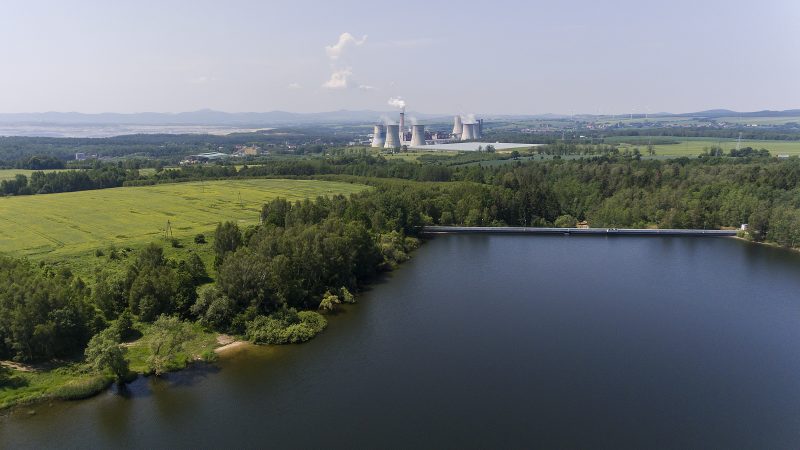 The history of lignite mining in the Žitava Basin dates back to 1740. In the 19th century, there were nearly 100 private underground mines and opencast pits here. Regular opencast mining on an industrial scale began here in 1904. Since then, the development of the region has been strongly linked to mining activities and the energy complex has become the most important local employer.

The Turów facility is located in the Žitava Basin. The surrounding mountainous terrain is a natural barrier limiting the impact on the region. The cross-border location of the facility and the desire to maintain good neighbourly relations with local communities on three sides of the border make the PGE Group persevere in its efforts to minimise the impact of mining operations and energy production on the environment and the lives of local residents. Priority is given to investments related to the protection of surface and deep water and those limiting particulate and noise emissions.

Transition Under Our Very Eyes

The range of mining operations at KWB Turów was defined in the 1994 concession. The area actually covered by mining operations in the coming years will not go beyond the boundaries defined 26 years ago. Moreover, it is already more than half the size of the area specified in the 1994 concession. The main part of the land reclaimed from mining has been returned to the natural environment. Some 22 million trees were planted as part of the reclamation of the mine area in 2008. The local forest complex, much valued by the Bogatynia community, is one of the examples of the ongoing conversion of mining regions. This is a long-term process that began in Turów many years ago and requires consistent actions and considerable investment. Approximately €18.9 million was spent on measures to minimise the mine’s environmental impact between 2015 and 2020, and approximately €14.4 million is planned for 2021-2025. Further investments are planned for the next decades, in line with the 2040 Polish Energy Policy adopted last February and in the spirit of the European Green Deal.

The protection of surface and deep water is a priority. As early as in the 1960s, the Turów Mine began constructing a slurry cut-off wall, over 4 km in length, on the mine site along the border with Germany to protect waters on the German side, including the border river Nysa Łużycka. The screen has served its purpose since 1987.

The construction of a similar slurry wall is currently being completed, which will also protect the areas adjacent to the mine on the Czech side of the border from potential groundwater outflow. Its purpose is to protect the drinking water intake in the nearby village of Uhelna in the Czech Republic. The underground barrier is intended to secure hydrographic conditions on the border between the two countries. Approximately 1,100 metres long and 1 metre wide, the slurry wall is created at a depth of between 65 and 117 metres using low-pressure injection technology. When injected into the voids and pores between the grains, the injected material acts as a binder which, formed on the basis of clay, achieves a high penetration capacity of the soil and rock, improving their geotechnical parameters and tightness. The investment will be ready this autumn. The cost of the project is approximately EUR 3.8 million. Once operational, the effectiveness of the underground shield will be monitored by hydrogeologists from Poland and the Czech Republic. The construction of the slurry wall has been scheduled jointly with the Czech partner and it will allow even more precise monitoring of the impact of the Turów mine on cross-border water resources. They have already been monitored for many years by Polish-Czech and Polish-German teams of specialists. 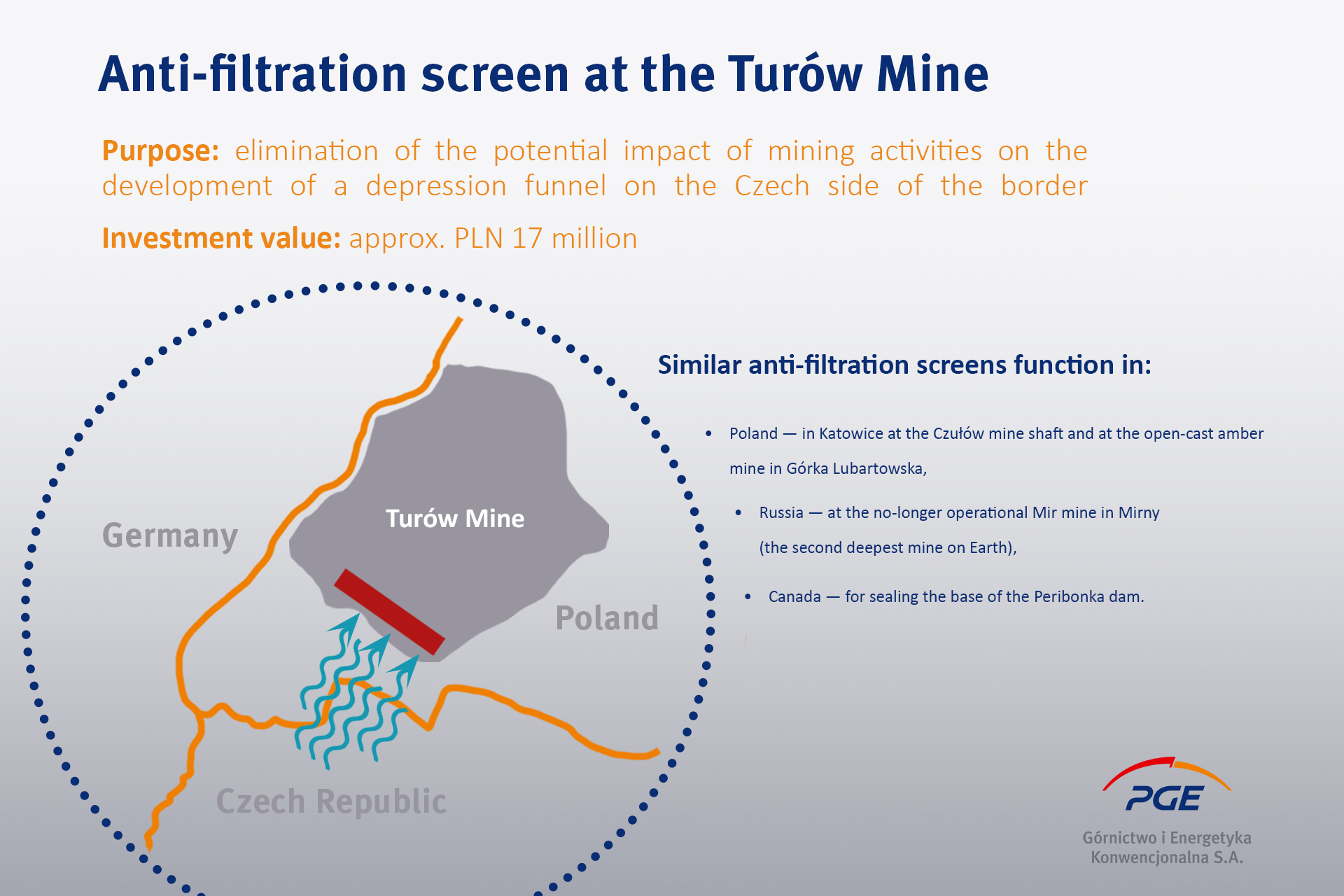 The impact of the Mine has been monitored at a network of about 550 points since 1997. More than 150 points belong to the Polish-Czech and Polish-German monitoring network, and measurements are taken twice a year. In addition, the expansion of the third mine water treatment plant on the Ślad stream featuring a sludge dewatering plant was completed in 2017, an expenditure of approximately €10 million. 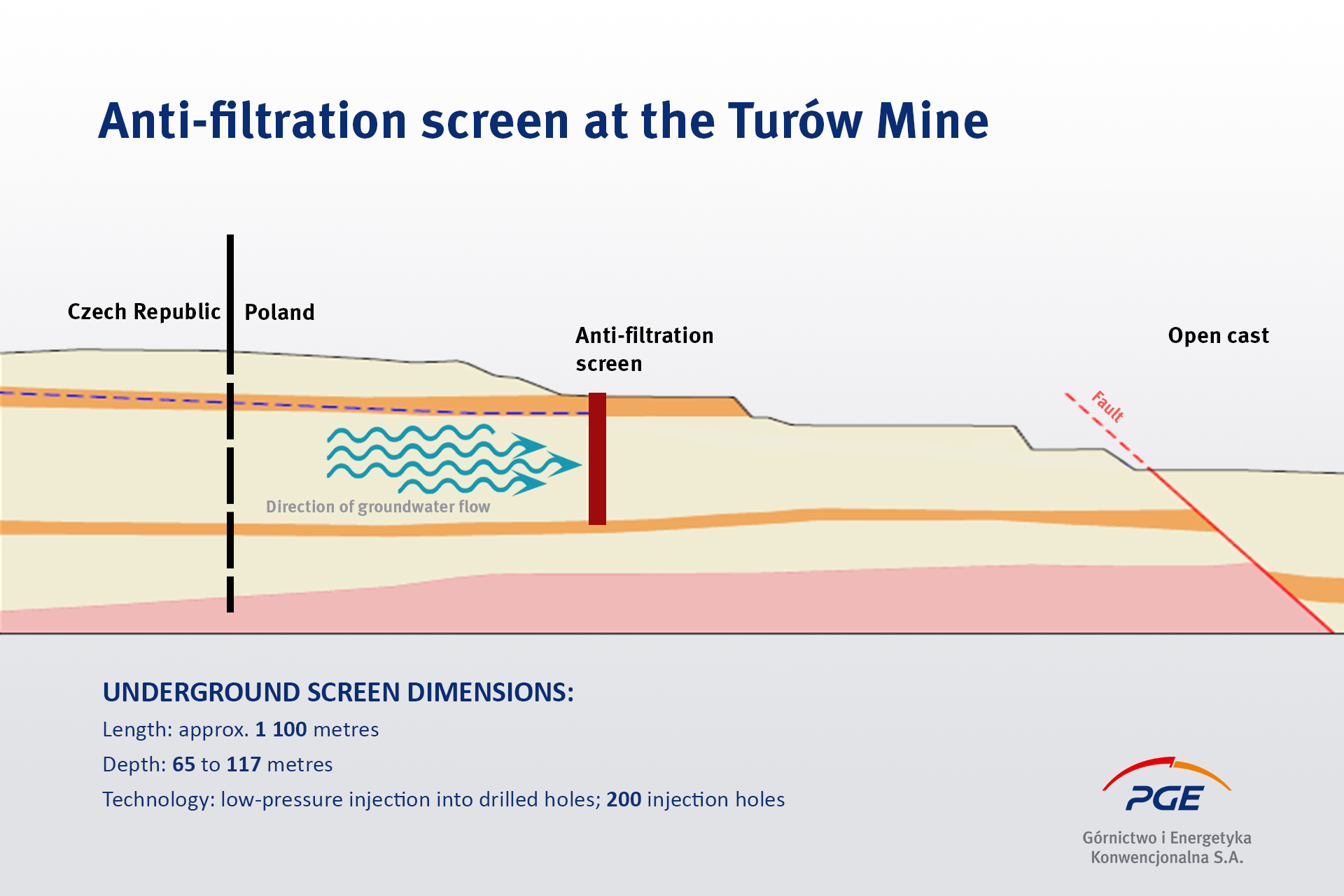 Reduction of Noise and Particulate Emissions

The Turów mine and power plant are continuously monitored for both noise and particulate concentrations. Between 2016 and 2020, the mine invested approximately EUR 3.3 million in replacing the conveyor belt pulleys with low-noise pulleys with better acoustic parameters. The reduction of particulate emissions is mainly achieved by intense sprinkling of transfer and loading points and additional sprinkling of roads in the bunker area. The investment has significantly contributed to the elimination of the particulate problem with a verified effectiveness of 98%. Work is currently underway on the construction of a wind screen to reduce fugitive emissions from the coal bunker by limiting the wind power in its area. The estimated investment cost is approximately €4.5 million.

These and many other environmental investments completed in the framework of the energy transition of the Turów complex have significantly contributed to water protection, air quality improvement and noise abatement. As some of existing generation capacities have been decommissioned and the demand of the Polish power system has continued to rise, a state-of-the-art 450 MW power unit was commissioned in May 2021 to ensure stable energy supply for approx. 1 million consumers, necessary during the long-term energy and economic transition of the region.

The unit which has replaced the decommissioned old units No. 8, 9 and 10 (206 MW each) meets EU emission standards. Sulphur dioxide emissions are almost 20 times lower and particulate emissions are almost 10 times lower than in the old units. The unit is characterised by approximately 15% lower carbon dioxide emissions than the older units. The newly commissioned power unit is one of the key assets in the National Power System. It will play a very important role in the national energy security system until low-carbon and stable generation capacities appear in the system.

A Challenge and an Opportunity for the Region

Turów is one of 10 regional lignite mines in close proximity across the Czech Republic, Germany and Poland – at the same time the smallest (apart from one in the Czech Republic) and the only one in Poland. Each of these mining companies, and indeed each of the mining regions face a difficult path of transition set out in the European Green Deal. The transition away from fossil energy sources is inevitable but the process must take into account the unique challenges of the regions at hand, like the Nysa Euroregion. The success of the transition and benefits for the region will depend on close cross-border co-operation, an exchange of experience and implementation of joint projects. The owner of the Turów complex will be urging its Czech and German partners to take this course.

Poland has committed to phase out coal by 2050, which is in line with PGE’s October 2020 strategy. The operation of the Turów Complex until 2044 is a key target in the context of a fair transition of the region in which it operates. Apart from mining, new investments will be made in the Turów area in the coming years to secure the future jobs of thousands of people linked to the facility. Furthermore, investments are planned into renewable energy sources, including  photovoltaic and wind farms. A just transition should allow time for a gentle and smooth change respecting social, economic and energy security goals of Poland.