Unexploded munitions and chemical residues in the sea: In the search for lasting and economically viable solutions 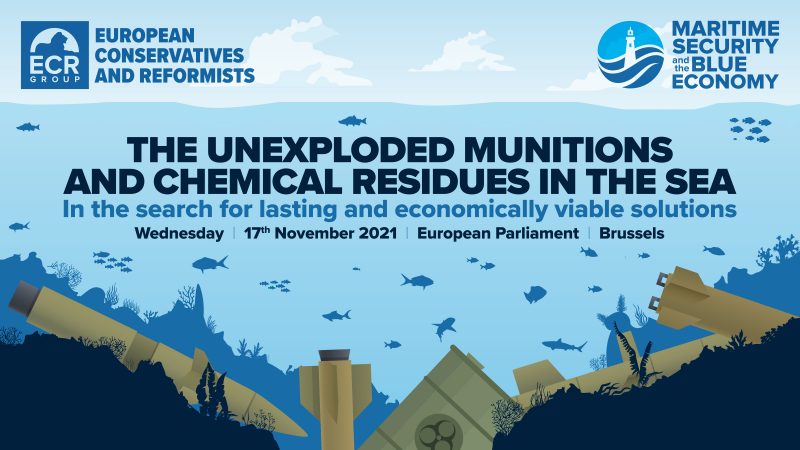 The European Conservatives and Reformists Group in the European Parliament has the pleasure to invite you to an online conference on “Maritime Security and the Blue Economy – Unexploded munitions and chemical residues in the sea – in search for lasting and economically viable solutions” taking place on Wednesday 17 November 2021.

Anna Fotyga is a Member of the European Parliament and spokesperson for ECR Foreign Affairs.

The 20th century was marked by wars that shook both Europe and the wider world. One of the lesser examined yet lingering consequences of warfare in Europe is the dangerous refuse that still litters our sea beds. Following the World Wars, many seas were used as ‘easy’ dumping grounds for unwanted chemical and conventional munitions from unused war stocks.

Although justified at the time for safety and security reasons, such as the fear of leakages and explosions, these hazards never dissipated at the depths of the seas. Munitions stocks still affect the Baltic Sea, the North Sea, the Adriatic Sea, the Japanese and Australian coastlines, and the Atlantic coast of the United States and Canada.

The Baltic Sea represented a key area of strategic interest to the European Union, which today shows through the unknown tonnes of unexploded munitions and chemical residues that remain scattered across its floor. Due to incomplete documentation regarding quantities and locations of munitions dumps, it is impossible to determine the exact amount of chemical munitions lying on the seabed containing toxic substances, such as mustard gas, which represents a severe hazard for the environment and coastal communities.

The dumped munitions pose a threat to human life and the marine environment that endangers not only fishing and navigation but also the development of offshore energy, aquaculture, shipping, tourism and other sectors of the blue economy. There is a plausible risk for dumps from decades past to cause an ecological disaster and poison large areas of the Baltic Sea. This is a problem that deserves our attention.

Experts and stakeholders agree that the dumped munitions and chemical weapons on the seabed, now more than ever, must be cleared. Changes to ocean temperatures, salinity and density levels are having an unknown effect on the toxic refuse. Additionally, human use of the sea for energy, aquaculture and other resources is expanding, and the old munitions threaten our relationship with our waters.

In response to this issue, the ECR Group, together with MEPs from various political groups, called on the President of the European Commission to take urgent action, making nine specific recommendations. Furthermore, the European Parliament resolution on Chemical Residues in the Baltic Sea, April 2021, calls on the European Union to commit to clearing the Baltic Sea of WWII shipwrecks and chemical weapons. The resolution was approved with a large majority.

The EU has extensive experience in mine clearance across the world, with operations spanning the Balkans, Africa and Asia. For the Baltic Sea, the EU must draw on that experience and adapt accordingly.

The European Commission knows of this problem, and a detailed study with more decisive actions is anticipated. In 2019, a Colloquium on the Challenges of Unexploded Munitions in the Sea took place, which was a crucial step in sharing experience and knowledge between relevant stakeholders. There is an excellent opportunity for the EU to turn this matter from a struggle into another example of the EU’s positive and effective engagement, more so given that this challenge lies within many European waters.

The event will be hosted by ECR Group MEP Anna Fotyga and split into three segments: From a global problem to best solutions’, ‘the state of play and calls for further action’; and ‘Research, innovative technologies and economically viable solutions’.

Keynote speakers will include EU Commissioner for Environment, Seas and Fisheries Virginijus Sinkevičius, who is responsible for developing a sustainable blue economy, and Jacek Sasin, Deputy Prime Minister of Poland and Minister of State Assets, who will focus on Polish experiences in dealing with unexploded ordnance and chemical residues.

Join us for our next international conference on maritime security and the blue economy on Wednesday 17, November 2021,10:00-15:30. The event can be followed live on the ECR Group’s Social Media Channels.