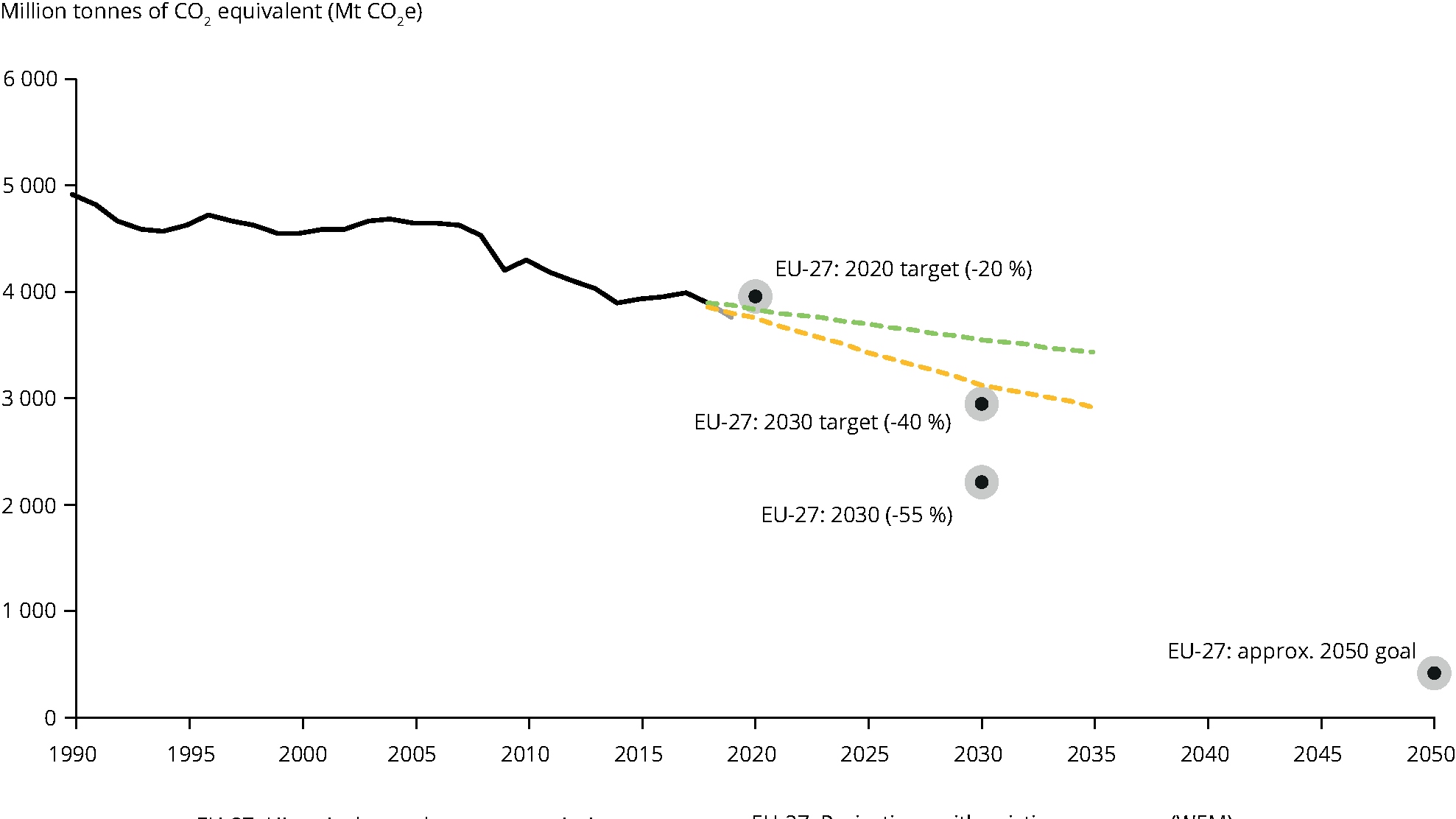 As the European Commission rolls out legislation to reach net-zero emissions by 2050, an intermediate target of -55% was set for 2030 in order to put Europe on the right track.

And while the European Union sets the objective, it will be up to national governments to ensure the targets are met.

So how are they doing so far?

First, the good news: the EU is on track to meet and even surpass its existing climate target for 2020.

Looking at the 2030 goal, however, things look different. If EU member states were to fully implement all the existing policies listed in their National Energy and Climate Plans (NECPs), Europe would reduce emissions by around 37% below 1990 levels.

That would fall slightly short of the EU’s current target, which is a 40% reduction in greenhouse gas emissions by 2030.

Now, if all existing EU policies were implemented in full, Europe would do much better, reaching emissions reductions of around 46-48% by 2030.

Good, but not sufficient to meet the EU’s new climate goal of -55%. In fact, no EU member state is on track yet for a -55% emission goal.

Let’s look at the EU’s 2030 energy and climate targets in more detail.

The EU’s renewable energy directive, last updated in 2018, sets a legally-binding target to increase the share of renewables to 32% of energy consumption by 2030.

in 2019, the EU reached a 19.7% share of renewables in final energy consumption, meaning it was just 0.3 percentage points off its 2020 target. Fourteen member states surpassed their national targets for 2020, with six very close to meeting them.

Boosting renewables is key to reducing CO2 emissions and for getting ahead of Asian and American competitors in a rapidly growing and strategic market.

Phasing out coal, the most carbon intensive of all fossil fuels, is vital to reduce energy emissions.

Under the Paris Agreement, world nations need to phase out coal by 2040 at the latest. Many EU member states have already phased out coal, but Poland, Romania, Bulgaria and Croatia are yet to bring in plans, according their NECPs.

Even though energy savings are essential to reducing CO2 emissions, the EU has consistently failed to meet that target, the only one of the three which is not legally binding.

That gap will get even bigger as Europe increases its greenhouse gas reduction target to -55% by 2030. To meet that goal, the Commission expects that final energy consumption will have to decrease by 39%-41% while primary energy consumption needs to fall by 36-37%.

And when it comes to energy efficiency in buildings, member states have been late to submit long-term renovation plans and a target to renovate 3% of government-owned and occupied buildings every year has consistently been missed.

Fifteen countries are currently considered to rank “low” or “very low” in their plans for renovation.

Emissions have been steadily declining in the EU, falling to 24% below 1990 levels in 2019, according to the EEA trends and projections report 2020, which tracks progress towards the EU’s climate and energy goals.

Europe’s current greenhouse gas emissions target is a 40% reduction on 1990 levels, but it is likely that a 55% reduction will now be put into law after EU leaders reached a deal on a new 2030 climate target in December.

In the long-term, the EU aims to reach net-zero emissions by 2050, with Austria, Sweden and Finland, aiming to hit that target earlier than this.

Member states’ NECPs vary in their emissions cuts. Bulgaria has a 2030 goal of keeping its emissions unchanged (-0%) while countries like Denmark, Finland, France, Luxembourg and Sweden and Germany plan cuts of around -40%.

That means the average planned emissions cut is -20%.

Neither planned nor existing measures are good enough to reach the new 2030 target of -55%. 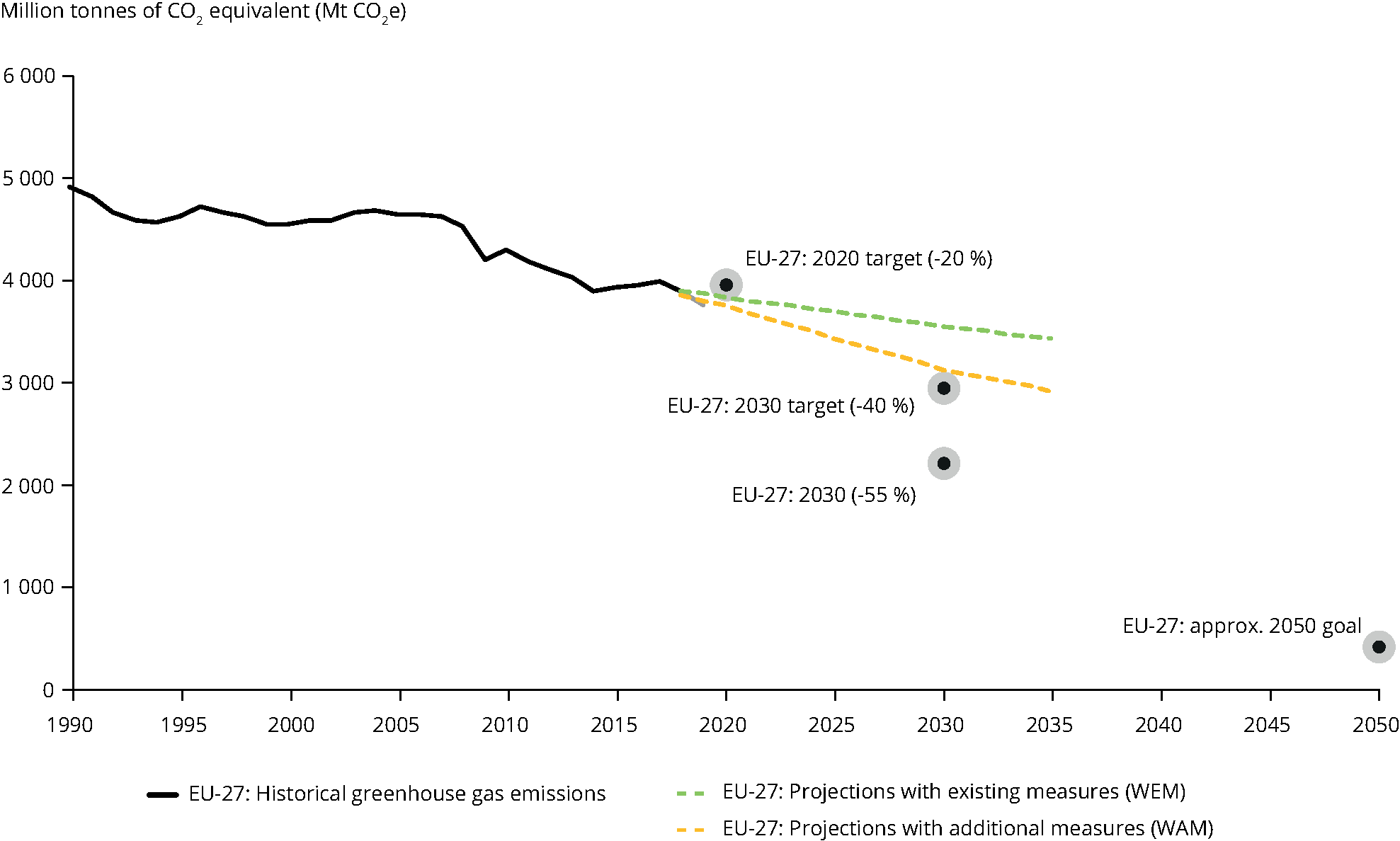