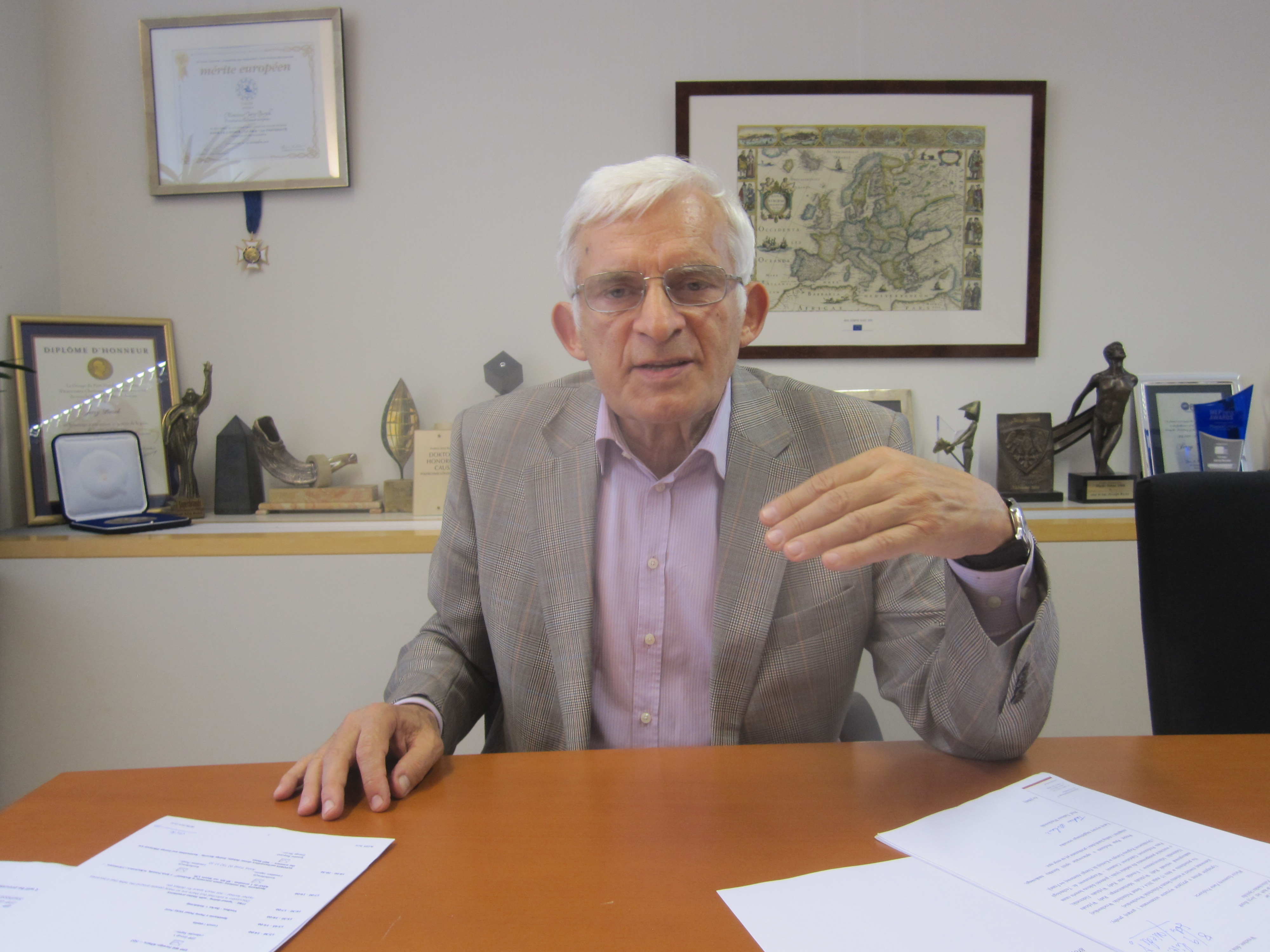 This article is part of our special report Poland: Ambitious achievers.

SPECIAL REPORT: New Council President Donald Tusk is a proponent of a European Energy Union, aimed at achieving more independence from Russia. It is difficult to imagine a more devoted advocate of progress in this area than Tusk, Jerzy Buzek, MEP and former President of the European Parliament, told EURACTIV in an exclusive interview.

If my records are right, you first told EU leaders that a ‘European Energy Community’ could become the next big EU project, similar to the European Coal and Steel Community in December 2009. I’m not sure you were taken very seriously at that time, but now setting up an Energy Union appears to be very high on the EU agenda for the next few years. How would you comment?

You are absolutely right. In 2009, I was fighting for the Lisbon project, our new form of constitution [at that time the Irish referendum and the position of the then Czech President Vaclav Klaus were seen as a possible obstacle for the adoption of the Lisbon Treaty]. Because there is a text about solidarity in the energy field, and that was the basis of my initiative for a European Energy Community.

So I went to Ireland before the referendum, as President of the European Parliament, advocating for the ‘yes’ vote. I also did it with Vaclav Klaus. He’s actually a friend of mine. We have met so many times. And I raised the idea – it’s actually very simple – of a single energy market, with all the cross-border connections for electricity and gas and open trade in the European Union. Second, I was also an author of the so-called Strategic Energy Technology plan, the SET plan for the EU, and thirdly, of the joint purchasing of gas, and possibly of electricity, from outside the EU.

Now we can say that the Energy Union has the same goals as the Energy Community.

But the name is changed?

It’s a new brand for the same great idea. I can say that we have been able to overcome a lot of problems during the last four years, thanks to the efforts of the European Parliament and the European Commission. We now have €6.5 billion for new interconnections in the EU. For my country, Poland, this covers twelve different gas and electricity connections with our partners. So we solved a lot of problems, also by adopting the Third Energy Package, and preparing legislation for the coordination by the European Commission of the purchase of energy. Now it’s up to the European Council to implement everything.

[Council] President [Herman] Van Rompuy dedicated three European Council meetings for energy. The first, in January 2011, was dedicated to the Single Energy Market. Now I can say that the new President of the European Council [Donald Tusk] will move things forward. I can hardly imagine a more devoted advocate than him, to lobby for the idea under its new brand of European Energy Union.

The new European Commission also signals that the Energy Union would be a major priority. It looks like former Latvian Prime Minister Valdis Dombrovskis will be Vice President for Energy Union. And I imagine that Mr. Dombrovskis’s political thinking is very close to Mr. Tusk’s and to yourself…

Yes. I’m sure it’s probably the same point of view.

And you used the tribune you had a President of the European Parliament to call for an Energy Community. But Jacques Delors also fought this battle…

Yes, we raised the issue together. With Jacques Delors, the former European Commission President, on 5 May 2010, on the occasion of the 60th anniversary of the Schuman Declaration, we raised the issue in the European Parliament [EURACTIV coverage here]. And we adopted a one-page declaration which explained what we mean by energy community.

In your capacity of re-elected MEP, what are your personal ambitions in this field? What do you expect to happen until the end of your mandate?

I expect that the EU will have a truly working energy market that all member states will enjoy security of supply, and I hope – cheaper energy, thanks to the competition in a big open market. And I hope there will be freedom of choice for consumers as to which supplier of gas and electricity to subscribe. And environmental-friendly technologies, to the benefit of our citizens, new technologies in renewables, in energy efficiency, in nuclear safety, and for minimizing emissions from fossil fuels. Because we will still use fossil fuels, as will China or India. But the goal to minimize emissions will remain, and I expect technological progress not for low-carbon economy, but for low-emission economy. And we should achieve a broad, comprehensive agreement at the [2015 United Nations] Climate Change Conference in Paris. That would be a great success.

What will be the most difficult in the Energy Union?

The same as it was in the Coal and Steel Community: joint purchasing. Because joint coordination is fulfilled, the European Commission is responsible for that. The Single Energy Market will encourage member states to go forward, because it depends on them, on national governments. Research: we got more than €6 billion for research in the EU in the next few years, almost three time more compared to the last seven-year period. This is fantastic progress. But what is lacking is joint purchasing, and this is probably the most important goal of the energy Union. It will be very difficult to be achieved, but we should start.

We’ve been talking a long time, and you haven’t once mentioned Russia. Why are you so diplomatic? I would like also to ask you about the May 2013 EU summit which was aimed at bringing down energy prices and make the European economy more competitive. But then we had another summit in June 2014 and the priority this time was to reduce energy dependence on Russia. The problem is, energy independence has a price. So how will we square the circle?

It is not by accident that I didn’t mention Russia. Not even once. Because everything we’ve been doing, starting from joint financing of technology and research, to the energy single market , and also interconnectors and coordination of gas and electricity purchasing, means more independence from Russia, more independence and more security for our energy supply.

What could help is also our TTIP negotiations [the Transatlantic Trade and Investment Partnership negotiated between the EU and the USA]. We cannot imagine signing TTIP with the USA without opening the borders for energy. It means shale gas from the USA should be available on our continent. Liquid natural gas, LNG terminals in the USA, in the EU, should work with great capacity and help bring down our energy prices, and especially the price of gas. We should also develop our cooperation with Norway, Algeria, Qatar, other Arab countries. We should use a lot of possibilities to make ourselves more independent from Russia. Because this could be the most important sanction we could implement against Russia. And we know that in the existing situation, we should protest as strongly as possible against aggression in Europe, and fight for the integrity of Ukraine, for a free and democratic Ukraine.

If gas from Russia to the EU stops flowing this winter because of the Ukraine crisis, what should we do?

We’ve got reserves in our gas storages and reservoirs. We could also import more gas from North and South, because both directions still hold reserves. Let us go in this direction. Energy efficiency is also very important and we should step by step change our habits, because the worlds’ reserves are not infinite, and this is a good moment to achieve energy efficiency and use efficiency.

Some sources say that some big countries have insisted that as a condition for the election of Donald Tusk as Council President, Poland should become more climate-friendly and stop blocking EU efforts in that sense. How would you comment?

The decisions of European Council summits depend on the decisions of the leaders of the member states, not of the European Council President. He proposes the summits’ agenda and helps in the negotiations to achieve good, clear conclusions, which is not easy. I think Donald Tusk would have the possibility to formulate some important issues regarding our positions vis-à-vis Russia. Our relations with Russia have changed dramatically in the last seven-eight months. And we should draw clear and proper conclusions from this situation. I’m quite sure that the future European Council President will take note about all the changes, and will undertake all the actions necessary from the point of view of the European Union.