Greek official: ‘Investing in natural gas is both rational and unavoidable’ 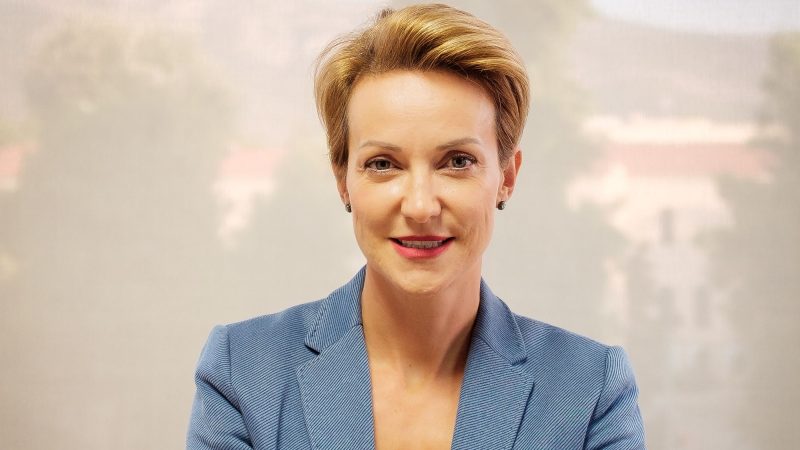 "Investing in natural gas as a fuel that will cover baseload demand and will increase flexibility is both rational and unavoidable, at least for the medium term," said Alexandra Sdoukou, the Secretary General for Energy and Mineral Resources in Greece

Greece is transitioning away from coal, but investments in natural gas are “rational and unavoidable” because they are needed to support renewable energy, Alexandra Sdoukou told EURACTIV.

Alexandra Sdoukou is Secretary General for Energy at the Greek Ministry of Environment. She spoke to EURACTIV’s Kira Taylor about the energy transition in Greece.

Greece is planning to phase out coal by 2028 at the latest – how much of that will be replaced by wind energy? Will it be offshore/onshore/floating? What is the timeline for that?

Indeed, Greece has announced and is already implementing an ambitious plan to move away from lignite coal. This plan consists of the decommissioning of all currently operating lignite-fired generation assets until 2023 and the phase-out of all lignite production by 2028.

To offset this extensive decommissioning of thermal capacity, we rely heavily upon new renewable energy source (RES) capacity additions in our generation mix. According to our National Energy and Climate Plan, Greece will double its wind and solar PV capacity until 2030, with RES contributing up to 64% to the country’s electricity production.

Moreover, the European Commission approved a few days ago our new RES Auctions support scheme for 2021-2025. The scheme will provide incentives of approximately €2,27 billion for the addition of 4.2GW of new RES capacity.

The new capacity will be allocated through joint technology auctions, so there’s no concrete administrative allocation between technologies. Be that as it may, it is foreseen that no technology will take up more than 70% of the total capacity auctioned, so at least 30% is guaranteed for each technology in order to avoid “technology monoculture” in our RES mix.

Moreover, an additional 2GW of offshore wind has been recently announced by the Prime Minister as a target for 2030; a discreet support scheme for this offshore wind capacity will be notified to the Commission in the first semester of 2022. Finally, significant interest has been shown in concluding merchant Power Purchase Agreements for new RES capacity, outside the aforementioned support schemes.

In light of the above, it is evident that Greece will continue to rely on wind power, both on- and offshore, as a key element, a cornerstone of its green transition strategy in the coming decade.

What challenges need to be overcome to allow the needed growth of wind power? Are there any issues with people’s perception of wind turbines?

In Greece, as well as in most parts of the world where wind power has achieved a mainstream status in electricity production, awareness of this technology increases in the general public. And, as many more people become aware of the many positives of clean and cheap energy from the wind, we also see that “not-in-my-back-yard” concerns also increase.

As policymakers, we need to take these concerns into consideration and address them honestly, with fact-based analyses and scientific evidence. We also need to put in place a series of measures that instil trust and incentivize the local populations that are asked to “host” electricity production units.

In Greece, we have a very thorough licensing process that examines numerous environmental criteria and ensures respect for both natural and anthropogenic environment. Moreover, we are in the process of fully revising our spatial planning framework, to adapt to the current realities of new RES technologies.

Moreover, a system of financial benefits for municipalities and local populations is in place to ensure that they are compensated for the establishment of RES units in their territories; this system is, again, under reexamination and optimization to make sure that the financial benefits RES producers provide for local communities and residents are more visible and transparent. This combination of safeguards and incentives can help address most concerns, at least those that are offered in good faith.

At the end of the day, though, suitable sites for the development of wind power assets are limited on land. That is why we recently concluded (and will soon put up for public consultation) a comprehensive framework for the development of offshore wind power, with a controlled and planned deployment of offshore wind on carefully selected sea plots. Moreover, we are considering ways to increase the output of already selected onshore sites through the repowering of existing, older installations with new, more efficient turbines.

Those measures will decrease the pressure for the identification of new suitable sites without jeopardising Greece’s ambitious plans for doubling its installed RES capacity by 2030.

What are the biggest challenges for Greece in the shift from fossil fuel to renewable energy?

Our plan to phase out lignite coal at such a rapid pace comes with a number of unique challenges, both technical and socioeconomic.

From the technical perspective, a complete rethinking of our energy sector is needed. Apart from plans to replace the obsolete lignite-fired units with new RES capacity, a need for flexibility arises.

This need is being addressed through a number of targeted measures to support the deployment of new natural gas assets, to promote storage, both in the form of batteries and of pumped hydro, and to increase demand-side response.

Apart from those measures, though, a broad programme to increase energy efficiency is underway, which includes focused sub-programs for residences, public buildings and commercial/industrial usage.

Energy efficiency is crucial in making a smooth transition to a sustainable energy mix, and we include it in our strategic priorities, as is evident both in our N.E.C.P. (which adopts targets for energy efficiency much higher than the average E.U. target) and in our Recovery and Resilience Plan (which allocates approximately 50% of our “Green Pillar” grants to energy efficiency Actions).

The challenges associated with de-lignitisation go beyond the technical. Regions in Western Macedonia as well as in Central Peloponnese have hosted lignite mining and electricity production activities for decades and rely heavily upon revenues associated with these operations.

The phase-out of lignite coal will drastically change the way of life in those regions; it is our job as policymakers to make sure that this change is for the better. That is why we have introduced a Just Transition Plan for the affected regions that will ensure jobs, rehabilitation of affected territories and new developmental opportunities for those regions and their residents.

Our goal is to turn this challenge into an opportunity and to make sure that, at the end of this process, the main beneficiaries of the energy transition are the populations of the areas in transition, with tangible positive effects in their income, their health, their prosperity and way of life.

How could Greece enable the import of renewable energy from places like Africa?

Greece stands at the crossroads of three continents and it is our vision to facilitate the transport of energy between these continents.

A dimension of this vision is a planned Subsea Cable Interconnection between Greece and Egypt. Recently, political endorsement to this ambitious project has been provided by the signing of a Memorandum of Agreement between the Minister of Environment and Energy of Greece, Kostas Skrekas, and the Egyptian Electricity Minister, Mohamed Shaker.

This experience, along with the close cooperation and share of knowledge with our Egyptian counterparts, I think will be sufficient to ensure the project’s technical viability.

Greece has been very active in the discussion about energy prices, what is the issue in Greece and how can it be solved?

The recent price spike experienced across Europe is the result of a “perfect storm”.  As such, it is far from a Greek issue; indeed, both the causes and the effects of this “perfect storm” are made evident across European energy markets, both for natural gas and for electricity.

In the short term, our priority regarding the energy price spike is to alleviate its results for the consumers. That is why we have introduced a very generous support program for end-users, particularly residential consumers and small businesses, in order to absorb most of the adverse effects of the increased prices.

In the long term though, we are confident that the prices of electricity will drop as the energy mix of our Continent moves towards renewable energy, what is today universally accepted as the cheapest form of energy available.

The process towards the energy transition will not be without challenges and obstacles and we will remain alert to address those when and as they arise, but we remain confident that once this process advances, we will become more resilient against imported fuels and price volatility and will enjoy clean, but also cheap and abundant, energy from the sun and the wind.

There has been some criticism that Greece is replacing its coal capacity with fossil gas, including investments in new fossil fuel infrastructure, what is your response to this?

We all know that an electricity system relying on high penetration of renewables requires stable baseload production as well as increased flexibility. Greece is currently implementing a widespread programme to procure significant amounts of storage, amounting to 1.4 GW, in the coming years and in the form both of batteries and of pumped hydropower.

This programme though still has some years until its full completion. Moreover, Greece has no serious alternative to add new dispatchable sources of generation to its production, such as nuclear power or major new hydroelectric generation.

To this effect, investing in natural gas as a fuel that will cover baseload demand and will increase flexibility is both rational and unavoidable, at least for the medium term.

Having said that, all new natural gas infrastructure to be constructed in Greece, including a much needed strategic gas storage facility, is designed to be hydrogen-ready and able to accommodate low carbon and renewable gases, in order to avoid.