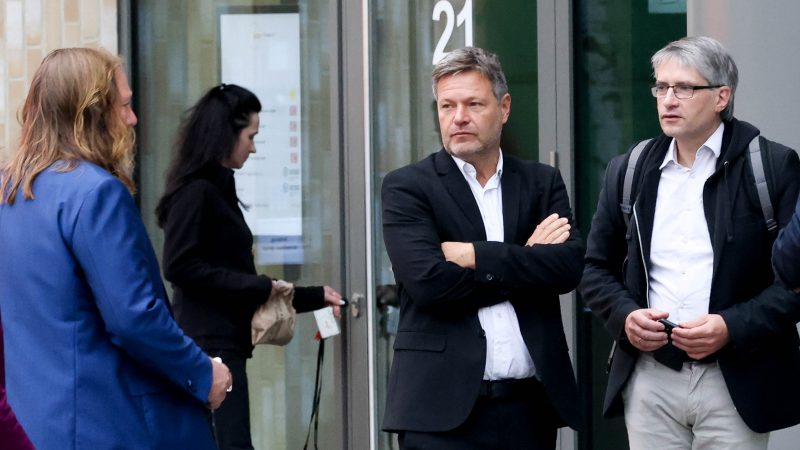 We accept that there will be some investment in - on an interim basis - fossil gas plants in order to help the coal phase-out, Giegold told EURACTIV, calling for its exclusion from the EU sustainable finance taxonomy. EPA-EFE/FILIP SINGER

Sven Giegold is a German Member of the European Parliament who sits on the Committee on Economic and Monetary Affairs for the Greens group. He is a member of the core team deciding on the next German “traffic light” coalition, part of the negotiation working group on finance and budget.

Mr. Giegold. What’s your role in the German coalition negotiations?

I’m one of the ten Green negotiators in the core group, responsible for EU issues. And I’m also one of the six people negotiating the finance and budget chapter. For several weeks I am mainly busy negotiating that coalition agreement.

The parties you’re negotiating with are the SPD and FDP. What is their stance on the role of gas both in Germany and the EU as you understand it?

However, in order to switch our energy supplies to a renewable footing, we will need some back-up, which will help to stabilise the more fluctuating power supply of renewables. This will probably include adding small volumes of gas capacity which can adapt efficiently to stabilise the renewable supplies.

But all new gas capacity must be ready for hydrogen so that hydrogen produced from renewable sources can take over soon. And that doesn’t change the fact that any fossil fuel emits CO2, and in the case of gas, extremely climate-destructive methane emissions come on top.

In that context, the EU taxonomy for sustainable finance plays a key role. Could you clarify your party’s position concerning the taxonomy and the role of gas as part of that?

First, gas may play a role in a renewable energy system, but in the form of green hydrogen [gas], and also gas from biomass.

Fossil gas is part of the problem and not of the solution. This is why we are against new pipelines like Nord Stream 2.

And to be technically correct, when transforming an energy system to a renewable one, there may be times when there’s little wind and little solar. If we do this on a European scale, the problem is much smaller because we can stabilise each other’s systems.

However, there may be times when you need capacity, and to stabilise the system. And for this gas may play a role until we have enough other storage facilities like batteries, smart energy demand response and hydrogen.

Therefore, we may need some additional gas turbines, which have to be fully Hydrogen ready so that they can be run on green hydrogen in the future. However, this doesn’t make any investment into fossil gas sustainable.

What we are seeing now in the taxonomy debate is that some Eastern European countries and also the outgoing German government want to invest massively in fossil gas, not only to stabilise the transition towards renewables, but in order to replace coal with fossil gas. And this is the wrong pathway, because also fossil gas is far from being carbon neutral.

Nuclear power stations cannot be switched on and off quickly, nuclear power doesn’t combine well with renewables and their fluctuating production curve, and those plants would take ages to be built. Look at Flamanville and Olkiluoto, both constructions originally scheduled to take up electricity production in 2012, and still far from being completed .

Furthermore, nuclear power has no insurance for the risk of a meltdown and therefore receives a massive and permanent free state subsidy. Moreover, it has no solution to the nuclear waste problem and therefore, it is not sustainable.

Both investment into fossil gas and nuclear should not be greenwashed by putting it in the taxonomy and in all this, there has been no change in the green position.

So, we accept that there will be some investment in – on an interim basis – fossil gas plants in order to help the coal phase-out. However, gas must not to be included in the taxonomy.

The French government is putting forward a standard driven by national political interests as a European standard, which is less sustainable and less credible than what the market has produced itself as a standard.

That is why this French-Eastern European initiative would destroy the sustainable finance efforts of the European Union, acting as gravedigger of the taxonomy. The financial sector will not use this publicly driven standard, they will continue to use a more credible standard.

As a consequence, the transition to green finance will be driven by the market instead of democratic standard-setting. As a Green, I can only applaud the financial industry for being more credible in the Green Deal than Ursula von der Leyen and [French President Emmanuel] Macron. And the Eastern European countries.

That’s the irony of the day.

Following up on that, Commissioner McGuinness suggested that a so-called “amber” label could be added to the taxonomy. What do you think of that proposition?

This is not a result of different needs, but a result of political gambling. As I said, environmental organisations, academics and also the financial sector have already agreed that fossil gas and nuclear are not a credible investment target for green finance products.

And therefore, it should be not be in the taxonomy. If this now creates a public debate, driven by certain countries like France, where Macron portrays himself under a shining banner “reinventing nuclear”, then that is his own political gambling in the French pre-presidential election.

But this will drive a bad compromise for Europe. A taxonomy including nuclear and fossil gas will turn the effort of making Europe the leading market for green finance into a Europe as the leading joke instead. If we include nuclear and gas, the European standard will be worse than what we already have internationally as a market practice for green finance.

Lastly, nobody with good intentions will buy these products, nobody will take these products seriously. And they will not be a sign of European sovereignty, but rather a symbol for European disunity. That is what makes what McGuiness and von der Leyen have asked their staff to produce so dangerous.

And European Commission Green Deal Chief Frans Timmermans is not speaking out, although he’s responsible for the Green Deal. I’m appalled that they are risking the common work we have built together in the last four years for greening the financial sector in Europe.

Coming back to would-be chancellor Olaf Scholz’s statement last week: he said that Germany would have to build additional gas power plants. Will the exclusion or inclusion of gas in the taxonomy have an impact on the financing of these gas power plants?

This is the irony of it: all major economies can find the investment capital they need for profitable investments. The market is full of capital, you can see a huge search for yield. Interest rates are at zero for OECD countries, big companies can refinance themselves equally cheaply on the market.

If France wants to build new nuclear plants, they can. If Germany wants to invest in fossil gas, it can. And I would say, even in Eastern Europe, the capital will be found. Whether it’s wise is a totally different question.

New nuclear power in France is a waste of money because it is out-competed by renewables already. Nuclear is an old technology that has to be subsidised against market forces as the example of Hinkley Point C shows, where nuclear electricity will receive a feed-in tariff of 12 Eurocents per kilowatthour for 35 years.

In Germany, new fossil gas infrastructure, like Nord Stream 2 is totally useless. We have enough pipelines, we don’t need another one, even less one which is splitting Europe politically.

And lastly, the gas infrastructure we need for the transition will have to be built so that it is part of the solution: for green hydrogen for hard-to-abate sectors. If it’s not, it’s also a stranded asset.

My view is: all these old forces of the economy, which want to continue earning money with old technologies a few years longer, have been successful in some countries in convincing their governments to hold on to old technology.

I have been elected by the citizens of North Rhine-Westphalia to the European Parliament, where the Social Democrats have stuck far too long to coal, putting more and more public money into an old technology. Now we have huge social problems in some of these regions.

I hope that Europe doesn’t repeat this mistake by investing even more scarce public money into old, museum-ready, technologies.