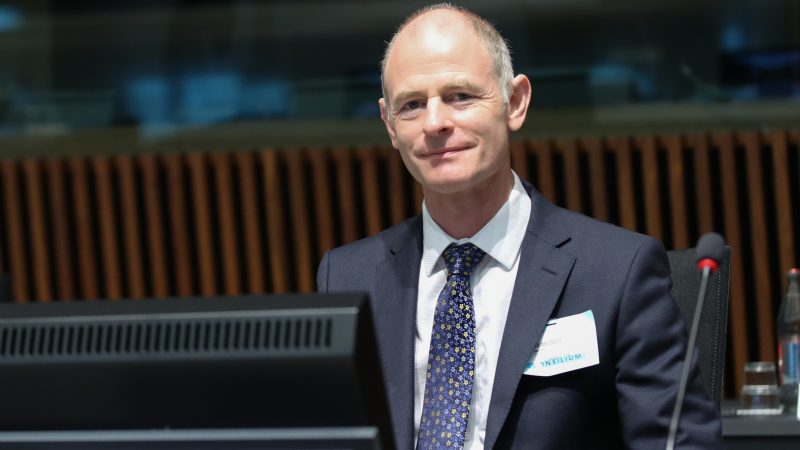 Ossian Smyth, Minister of State at the Department of Public Expenditure and Reform in Ireland [Europen Union]

The EU needs to increase its renewable energy capacity, become more self-sufficient in energy production and move away from foreign-controlled fossil fuels, according to Ossian Smyth, Irish minister of state.

Ossian Smyth is a Green Party politician, serving as Minister of State at the Department of Public Expenditure and Reform. He spoke to EURACTIV’s Kira Taylor at 26 October emergency meeting of the Energy Council to discuss rising energy prices in Luxembourg.

You mentioned during the meeting today that there are unique issues with gas supply coming via the UK to Ireland – what is needed to ensure the security of supply for Ireland?

The Fit for 55 package is being worked on by the Commission. I just wanted them to take into account that Ireland has this particular problem, which is also shared I suppose by Malta and Cyprus.

As islands, it’s harder for us to interconnect to our neighbours. We have to go through the ocean and our historic long term investment is through a non-EU country. So I wanted to make sure that they didn’t make legislation that was all centred around the idea of EU countries working together, that it would take into account somebody who had to transit through a third country.

Now we’re trying to maintain, obviously, the best of relations with the UK because we’re so deeply interconnected with them. For example, our electricity network on the whole of the island of Ireland is all owned by one body. We’re very deeply linked with them, but we want to make sure that some kind of legislative design isn’t produced by the Commission that doesn’t suit our particular problem.

We’re trying to build our new electricity interconnector to France – it’s going to take to 2026. So until that time, all of our electricity, all of our gas goes through the UK.

You’re one of the signatories on the joint paper supporting the internal energy market – why have you decided to support it? And do you think that there will need to be some sort of shift as more renewables come into the market and the price needs to move away from being connected to gas?

We think the solution to this problem is more renewables, it is self-sufficiency and it is getting away from the price volatility of foreign supplied fossil fuel energy.

This has been going on for decades and decades, back to when I was a kid in the 70s. So we’ve had oil shocks and we’ve had gas shocks. Then we’ve had the opposite – we’ve had super low prices. When very cheap fracked gas started coming in from the US, or it was $10 oil a barrel in the 90s, that caused people to make investments in the wrong direction: long term investments in fossil fuels.

We are weakened and our sovereignty is threatened by that kind of external dependency. We believe that we need to develop our own self-sufficient supply of renewable, clean energy within our own continent to escape from that risk and that threat. We don’t believe that we can buy our way out of this by just paying more and more money for fossil fuels.

If we simply supply money to everybody, we will actually drive up the price even further. It’s very difficult for a country to chase energy prices, the money we put in, the higher they go.

So what we want to do instead is to follow the Commission’s recommendation in the toolbox, just to target those payments towards people who are in energy poverty, so people who are cold in their homes because they’re elderly, because their homes aren’t properly insulated. They’re paying a large portion of their income in energy prices, we would target them specifically with money, but not generally cut taxes – for example, cutting VAT across the country isn’t something that we would do.

Every country has their own choice for how they do their own short term internal measures. In the medium term, we would like to see the continent focusing on renewables and sending a strong signal to energy investors that Europe is the place to go to invest in renewable energy.

And leaving the energy market as it is?

Leaving the energy market as it is, which has taken decades to build up and which has attracted a huge amount of investment. It wouldn’t be smart to take a short term response to threaten all that work. We think that there are other short term measures that would be more appropriate.

We’ve heard, particularly from central and eastern European countries, criticisms of the green transition – is there a danger of the Green Deal and the ‘Fit for 55’ package being derailed by the energy crisis?

I really don’t think so. I think that we do have to take those criticisms on board. None of these markets are perfect and they need review. I know that ESMA is going to review the ETS market and I know that ACER is going to review the wholesale electricity market. Those reviews are timely and welcome. We will certainly look at them and see what the recommendations are out of them, but I wouldn’t dismantle it or I wouldn’t prejudge what the outcome of those reviews is going to be beforehand.

So I think the way forward on this is through compromise and listening and working together. We need to find a way out of this. We’re all affected the same way and we all want the same thing in the end. We want to tackle climate change and want to keep people warm in their homes, we don’t want people in poverty – everybody wants the same stuff.

And we want to get away from the instability of foreign powers in unstable regions determining our energy prices.

We’ve heard a lot about joint procurement for gas, which was discussed over lunch today at the Council. Would you support this in Ireland? And is there a mandate for this?

We certainly support voluntary joint procurement. The only problem we have would be the idea that countries have to take part in this. So we just want countries to have the freedom to enter into whatever energy contracts they wish, to do it jointly if they want with other countries, but not to be forced into it.

So we support joint procurement so long as it’s voluntary.

Did you hear many supportive voices for that over lunch?

I did. I don’t want it to turn into a vote and hear ‘Well, we’ve got more than half’. I actually think we can find a consensus on this. Because as I’ve said, we all want the same thing. There isn’t a basic ideological problem here. So we’re going to get there. In the short term, we need to keep people out of energy poverty this winter. In the medium term, we need to move rapidly to renewables.

We’ve seen the Fit for 55 package with a revision of the renewable energy directive and energy efficiency directive. Do you think those need to be sped up in order to tackle the energy crisis now? And do you think there’s enough ambition in them to tackle any future energy crises?

Everyone is thinking about this in a way that they just would not have done five years ago. I’m from the Green Party – I’m amazed to see everybody talking my language suddenly. But really everyone has come up to speed so fast on this, not just the politicians, but the general public as well.

Everyone knows that this is the answer. The only game in town is clean, renewable energy. It’s falling in price all the time, the logic behind it is just becoming stronger and stronger. To see this kind of threat to our European stability is something that we can’t tolerate. We need to rapidly move towards that.

You’re asking is there the ambition – there’s the enthusiasm and motivation to get it done and the belief that it’s absolutely achievable.