Dedicated wind and solar capacity is necessary to produce clean hydrogen on a large scale. [Shutterstock]

Daan Peters is the associate director at Navigant Consulting, based in the Netherlands. He spoke to EURACTIV’s energy and environment editor, Frédéric Simon.

Navigant did a study last year for the Gas for Climate industry consortium. It found that biomethane and other renewable gases could be scaled up to reach 122bcm by 2050, under a high-case scenario. Today, you’re publishing an update of that study, saying the potential is 270bcm, which is more than double your previous projection. How did you come up with such different figures now?

We come to this figure by analysing more extensively the scope of supply and demand for renewable gas.

In the last study, we only analysed part of the energy system, focusing on electricity production and heating of buildings. Because these were the two main areas of debate about the future role of gas on the demand side.

On the supply side, our previous study focused mainly on biomethane. We looked a bit at green hydrogen but only from the potential of curtailed electricity, when there is over-production of wind and solar and the electricity is basically for free. So that was quite a limited scope.

In the new study, we looked at green hydrogen supply and electricity production more broadly. Once all the demand for direct electricity is satisfied with renewable energy, you can build additional wind turbines and solar panels specifically dedicated to producing green hydrogen.

Last year, we also didn’t really look at transport and industry. Decarbonising areas like shipping is quite a daunting task because it’s a sector that needs a lot of high energy-dense fuels. And bio-LNG, as well as hydrogen can play a role in heavy transport.

So our scope was wider this time, which explains the bigger figure.

What is the infrastructure cost of this?

Yes, there is indeed a cost related to electricity, hydrogen and methane infrastructure. What we assume, is that large scale green hydrogen production would take place relatively close to where the additional electricity is being produced.

If you have a lot of offshore wind and you produce the hydrogen offshore, you can transport it to land using existing gas pipes which are being decommissioned or are no longer in use. And that minimises the total infrastructure cost.

Indeed, the transmission pipes actually don’t need upgrading. All you need to do is modify the compressors that keep the gas at a certain pressure. Those need to be modified to deal with hydrogen as a high-volume gas with lower energy density. Hydrogen also typically flows faster. So every 200km, you have a compressor station that needs to be upgraded, but not so much the piping itself.

For the distribution network, we assume it will be mainly biomethane going to the households. And in our setup, this is going through hybrid heat pumps in houses that have a gas connection today. This assumes that all new houses would be connected either to district heating networks or have full-electric heat pumps. The same goes for houses that are not connected to the gas grid today.

But for all houses that are already connected to the gas grid, we assume they will move to hybrid heat pumps, with 60% electricity and about 40% gas to meet peak demand during the cold period of winter. And the volumes that are required for that are relatively modest, which means you could quite easily do it with green gas.

Even in scenarios that see only a relatively limited potential for green gas, you could still easily satisfy demand from the European building stock with green gas. And then you don’t need to upgrade the distribution grids.

Why do you assume that households will be served mainly by biomethane?

Because it saves infrastructure cost, you can leave the infrastructure mostly as it is. With a certain share of biomethane in houses, you also save shave off the most extreme needs for insulation, which saves a lot of money.

And this biomethane is essentially the same as natural gas from a chemical composition. 97% of it is CH4, which is the same as high calorific gas today. What you have today is often biogas with 55% methane and 45% CO2. But that can be upgraded. If you take out the CO2, it can then be used into the existing gas grids.

What about volumes? What kind of demand for gas does your study assume for 2050?

We have something like 220 TWh of gas in buildings, which is about 20bcm. So a little bit more than today’s production in terms of biogas. That assumes of course that a big effort is made on energy efficiency. But we also assume the great majority of energy in buildings will be met with electricity. 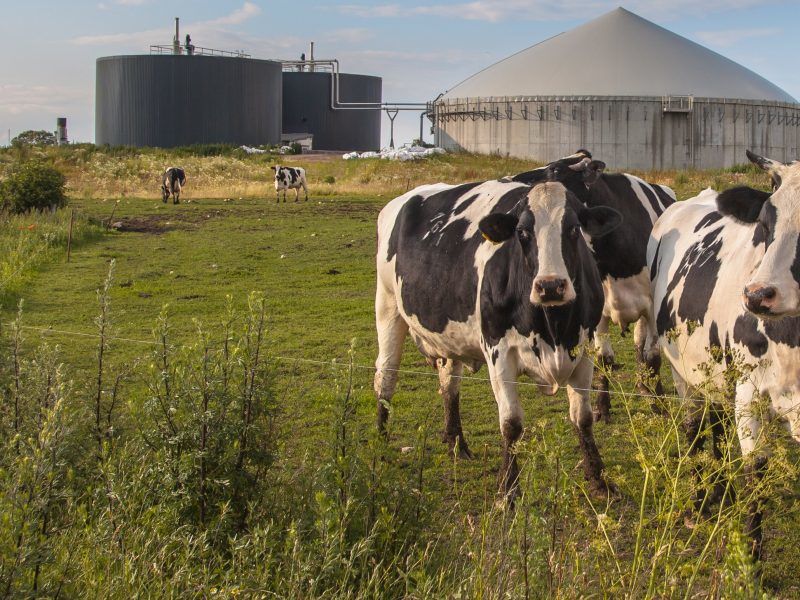 Your study assumes the gas sector achieves net-zero emissions by 2050. So what are the implications? Does it mean there will be no more fossil gas by then?

Our core scenario is 100% renewable. It includes only biomethane, a little bit of power-to-methane, and a lot of green hydrogen. So that means we have no natural gas in the European gas grid by 2050.

What we do have is the option of blue hydrogen, which is produced from natural gas with carbon capture and storage (CCS).

The issue with green hydrogen today is that it is still quite expensive. But what you can do quite easily is decarbonise existing hydrogen demand by applying CCS. So, you would turn so-called grey hydrogen into blue. And the next step would be to use blue hydrogen to grow demand for green hydrogen.

So we see blue hydrogen as an intermediate solution. And that of course still requires some natural gas. But either in 2050 or 2060, blue hydrogen can be fully replaced by green hydrogen, although that probably requires some political thinking as well.

Blue hydrogen is being tested today, for example at a Vattenfall power plant in the Netherlands. There is also a large effort in the port of Rotterdam to get started with CCS, which requires a carbon price of around €50. And that is still much cheaper than green hydrogen today, which costs about €150 per MWh. So the cost difference between blue and green hydrogen is huge.

But to keep on track with the decarbonisation objective, I suppose big volumes of blue hydrogen are needed pretty quickly…

We think it makes sense to decarbonise a soon as possible. It’s all good to reach net-zero emissions in 2050 but it’s better to start with aggressive decarbonisation now because of the cumulative effect of carbon emissions.

That means aggressively scaling up wind and solar as soon as you can. But at the same time, you would apply blue hydrogen to multiply decarbonisation efforts.

Do you have a figure in your study about the volumes of blue hydrogen that are needed by 2030?

No, we don’t have that. We have a 2050 end picture which demonstrates that 100% green hydrogen is possible, and where blue hydrogen is an intermediate step. The more you apply it, the more savings you generate. But it doesn’t really matter how big it is in the 2020s.

From a carbon budget perspective, it makes sense to decarbonise as soon as possible through the various routes that are available.

Does your study identify energy end-uses where gas can be phased out entirely?

25% of gas today is used in buildings. So we see that being scaled down significantly and replaced by electricity. But the energy system value of that remaining bit of gas in buildings is far greater than the value that gas creates today. So, even though the volumes will go down, the value of that small remaining volume is really large.

There is also a lot of gas being used today in industry, for high-temperature needs. Industrial processes requiring temperatures below 150°C will be electrified. But anything above this requires energy-dense fuels. And gas there plays a major role.

A third area is power production. Today, gas represents about 15% of the total power production. And we can foresee a slight decrease in 2050, mainly because the total amount of electricity demand will explode and because nuclear and coal power are being replaced.

Wind and solar are expected to grow dramatically, hydropower too but not much. Nuclear and coal will be phased out and replaced mainly by wind and solar. So gas use in the energy system will be roughly the same as today but the share will go down.

Yes. We see that not only in Germany, in France also there is a debate. In the Netherlands, nuclear is being phased out. And in the UK and Finland, we see that any new nuclear capacity is disastrous in terms of cost.

So we don’t think that in the coming 30 years, it will make sense from a financial perspective to invest in new nuclear. And existing nuclear capacity is being phased out, like with coal.

Also worth noting is that applying CCS to gas or coal power plants is really expensive. This is because the plants don’t run continuously, they are only active for 2 or 3,000 hours per year, to meet peak demand for electricity. What we find is that it’s much cheaper to run CCS in industry where you have 8,000+ of running hours.

That’s why CCS in the past was always so expensive – because it was always tested on power. But in industry, you have much longer running hours, which means more hours to run CCS per unit of energy.

One response to “Researcher: 100% renewable energy requires ‘a lot of green hydrogen’”