“We are satisfied with the commitments the decision announced,” Gazprom’s Deputy Chief Executive Alexander Medvedev said in a statement. “Today’s decision is the most reasonable outcome for the good functioning of the entire European gas market.”  He said Gazprom is committed to complying with them in future.

EU regulators ended the seven-year investigation after the Russian gas export monopolist agreed to reforms aimed at bringing down gas prices and allowing rivals a foothold in eastern Europe.

The announcement was hardly a surprise, as the Russian and Polish press already leaked most of the peace deal, though with different motives. 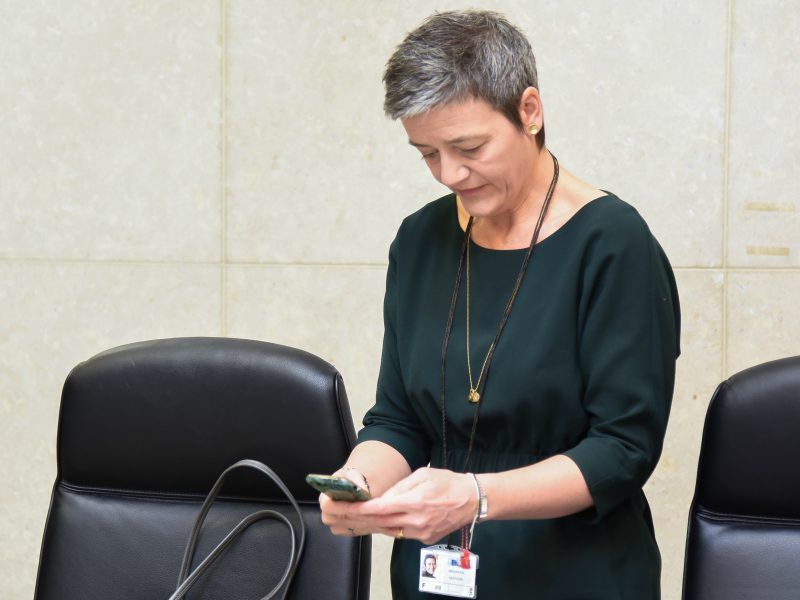 EU regulators will settle their antitrust case with Gazprom by next week, people close to the matter said on Monday (14 May), after the Russian energy giant pledged to change its pricing structure and allow rivals a foothold in eastern Europe.

This opened a so-called “market test” procedure under which countries concerned and stakeholders could give input for improving the deal.

Poland, in particular, was furious at the terms of the entente. “A far harsher ruling, including a considerable fine, would be fair and well justified,” Polish deputy foreign minister Konrad Szymanski was quoted as saying by state-run news agency PAP.

“This case is not about the flag of the company – it is about achieving the outcome that best serves European consumers and businesses,” she stressed.

Vestager was fully aware that she would come under fire for being tough on US giants such as Google or Apple, upon which she imposed huge fines, and too gentle on Gazprom.

She stressed that all completion cases were different and that the Amazon case also ended with a commitment rather than a fine.

In particular, the Russian gas export monopoly will remove contractual constraints, which prevent clients from reselling its gas.

In markets isolated by a lack of pipeline infrastructure, Gazprom will give customers the right to change gas delivery points. Swaps will apply for contracts of at least 18 months at fixed delivery fees, including for relatively small amounts of gas and at short notice of just over four months.

“In the countries we are talking about Gazprom is still a dominant player,” Vestager said.

Many of Gazprom’s concessions are in line with changes in its marketing strategy away from long-term, oil-linked contracts, to which the EU objected, as a sea change in the gas market has eroded its dominance.

Asked by EURACTIV what exactly was new between the March announcements and Thursday’s decision, Vestager said the Commission got more than 40 responses since it launched the market test. She called these responses “very mixed”, but also very detailed and constructive, even when they were negative.

Some of the changes that were taken on board were the commitment that more delivery points would be added [customers that have bought gas, originally for delivery to Hungary, Poland or Slovakia, can choose to have Gazprom deliver all or part of it to Bulgaria and/or the Baltic States instead, and vice versa], that the service fee would come down 30% compared to the market test, and that the same commitments by Gazprom would apply also for future customers.

Gazprom no longer the boss in Bulgaria?

According to the Commission press release, the agreement will allow the transfer of control from Gazprom to the Bulgarian operator of the gas transmission infrastructure. “Following the market test, Gazprom clarified a number of technical elements to ensure the obligation would be fully effective”, it said.

EURACTIV asked Vestager about the state of play of the so-called BEH case, involving the Bulgarian Energy Holding, dating from 2015. Via BEH, Gazprom had stopped deliveries to Overgas, a private Bulgarian gas distribution company.

Overgas offered gas prices to its industrial clients that were 7-8% lower than Bulgargaz. This infuriated the state company, which saw many of its corporate clients signing up with the private competitor.

The Bulgarian gas grid is owned by Bulgartransgaz, part of the Bulgarian Energy Holding (BEH), which has amassed a multi-million debt to the state budget. The BEH holding was established in 2008 by then-Prime Minister Sergei Stanishev, with the aim of cross-subsidising state companies at a loss. Bulgargaz is the largest Bulgarian gas distribution company.

Vestager said: “The Bulgarian issue is still open, we are not there yet, but of course, eventually we will get there and most probably, I will come back here and answer your questions”.

In recent days, two MEPs from the UK have filed written questions to the Commission, pressing for a solution to the protracted BEH case. One of them, by David Campbell Bannermann (ECR) suggests that the Commission may have been siding with political leaders in Bulgaria. The second one, by James Carver (EFDD), suggests the Commission is deliberately taking too much time.

Contacted by phone, Carver told EURACTIV that Vestager had been “very happy” chasing Google and Facebook but “when it comes to Gazprom, I don’t know why it seems to go slow.”

“To me it is ridiculous, this case has been with the Commission for three years. I can’t understand why the Commission is quite happy to go after the Americans, but as to Gazprom, it seems really easy to make your own assumptions on it.”